Just a quick update for anyone using this as their forum for baby updates; nothing.

Been having some conflicts with my doctor as of late, but my next appointment is not until Monday afternoon, at which time he will likely want to schedule an induction, so if nothing happens by then, surely there will be something to report by Tuesday night.

I'm not really keen on induction, since I already know that Mother Nature is a much better nurse than anyone else (see previous entries about sheep and deliveries-yes, I know I'm not a sheep), but since the baby is gaining about a pound per week at this point, I'm not going to fight it all that much. The doc had wanted to induce me the past Monday, but I declined. May not have the same sense of 'nature-based loyalty' come next Monday.

Lucy and I celebrated Earth Day with our annual garbage ditch pick. Got one pretty big bag of garbage and then my partner decided she'd had enough, so while it was a pretty quick Earth Day project for us, we DID manage to do SOMEthing. Also spotted some pussy willows while picking, which was a nice sign of spring.

So, that's all from the farm. It has been sort of hard to take on any major projects around here since we don't know when we'll have to drop them in favour of a trip to the hospital. Mark has been building gates and filling in gaps in my sheep pasture this week, which is really great. We're expanding it a bit at the entrance and also looking at our options for fencing the rams being fattened (since once again I didn't get around to castrating and they'll need to be separated before they're ready to ship). We're looking at using the back part of the main barn for a lambing/winter barn and pasturing out behind it as well. This would give me the option of lambing at two different times of the year, which I currently don't have the space for. So lots of big plans at this point. We'll see how they all play out.

The weather has been windy and wet, but I think it's looking up. Lucy has been having her twice daily swings on the swingset, rain or shine, so summer MUST be on its way. Here she is in her Carhartt overalls (compliments of Joey Cook) ready for action. 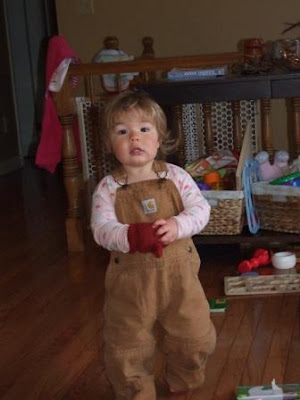