There is something about this time of year, and the air that seems to carry a real sense of anticipation for the slow-down that is coming.  And I think that anticipation is what carries us through this crazy time to the winter slow-down.    Because while fall is beautiful and crisp and the perfect ending to summer, it is also such a busy time and the cool nights make for much needed deep sleeps for tired people.
Too bad those sleeps weren't just a little longer.
Anyway, Mark and I are both really busy with our church community these days as we all get moved into our beautiful new building and get routine started up again.  Sunday School is back in full swing, but we are also in the process of looking for a new minister, so there is a small air of chaos around everything.  And of course, there's Christmas around the corner already, to get concerts ready for, etc.
The ACORN Conference is coming up in November and is looking really good, but as a board member that's another plate to balance.
We're also each in the process of a couple personal items which eat up our evening time so by the time our heads hit the pillow we're torn between catching a wink of sleep and hashing out our day since we haven't really seen each other, besides passing one another in the hall to get a kid to the bathroom, or a meal on the table, or...the things that we dream of as parents and a couple.
So, life is just as it should be right now isn't it I guess?
Unfortunately for the blog though, it's taking the beating.  I've got SOOO much I want to say, it's driving me crazy, but I guess that'll just make for more interesting winter reading.  Speaking of interesting reading, the Rodale institute just completed compiling and publishing their 30 (yes THIRTY!) study of Farming Systems, comparing organic and conventional and the results are...well...undeniably astounding.
Here's just one tiny quotation for you to sleep on-if you can sleep after this:
"GM crops have led to an explosion in herbicide-use as resistant crops continue to emerge. In particular, the EPA approved a 20-fold increase in how much glyphosate (Roundup®) residue is allowed in our food in response to escalating concentrations."
One of the favorite claims of GMO proponents is that because one spray does it all, it means using LESS, but this has been disproven so often, it's not even news anymore. What gets me is the second sentence which indicates firstly, just what a hold the chemical companies have over our public system, but also the glaring fact that we are consuming 20 times more Roundup in our FOOD than before.  And how much was allowed BEFORE!?  Ugh.
So on THAT note, I'll leave you with some shots the kids and I took around the farm the other day.
The first is my fat sheep.  They did so well on pasture this year, I am increasingly concerned over them being too fat to lamb easily, but that's really a good problem to have, if you have to have a problem, I guess. 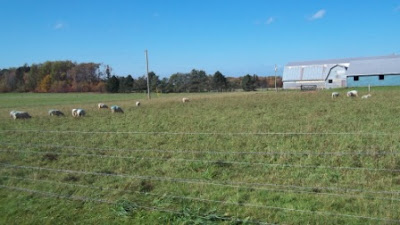 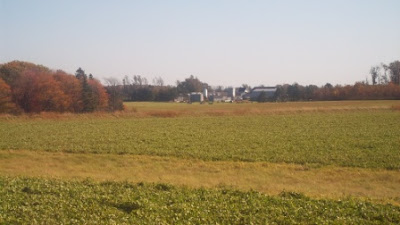 This the farm from the back field.  I love this angle with all the shiny grain tanks and equipment nestled in what looks like a bunch of empty fields. 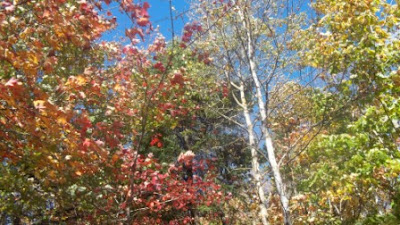 This one of the leaves was taken by Lucy because it looked like a 'rainbow' and I thought my Dad would enjoy seeing that PEI has a few pretty leaves, even if NB doesn't.  wink wink. 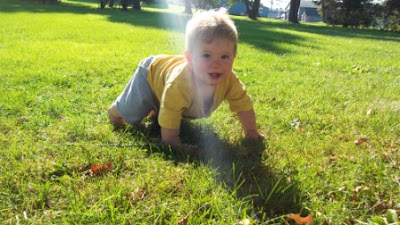 And here's my big man, crawling around full bore, doing his best to keep up with his older counterparts.  He's pretty happy for the most part, but these last few days is honing the skill of getting attention by whining, fussing, crying and hanging off Mommy's legs. I'm pretty sure it's due to teeth and maybe a growth spurt, but time will tell.  Here's hoping.

Yawn.  Sleep calls.  If only I would answer more often and earlier.

I hope this finds you sleeping deeply in these cool nights and not giving up on my blog.  More to come, I promise!