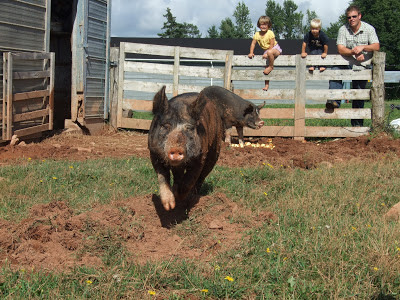 It's the time of year when things start to wrap up and we begin to look at the upcoming season of meetings and try to make life easier for those who might be doing chores while we're gone.  Today we shipped Toot and Puddle off and a couple lambs.  It surprised me how sentimental I got about those crazy pigs and Lucy had a particularly hard time, despite having talked about it for a while now.  Just last week we were talking about how much better the bacon will be as we filled the wheelbarrow with windfall apples from the orchard.  I guess it sort of really hits home when you're going through the stress of loading them after such a stress-free summer of mud and treats.  It makes me yearn for a time when butchering your own livestock was not a lost skill or considered a time-eating, money-waster and something we all did without thinking about it. 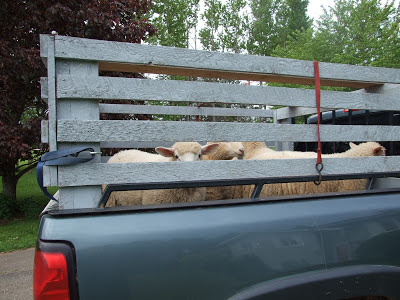 We've also been trying to decide what to do with a couple other 'extras' we have around the farm these days.  There's Rhubarb, who needs to go.  Somewhere.  She's still got her horns, which is a real hassle for a lot of people but were a good lesson for us to not put it off next time.  She should grow up to be a great milker, but she's a bit away from that yet.  She's sure come a long way from this picture though! haha. 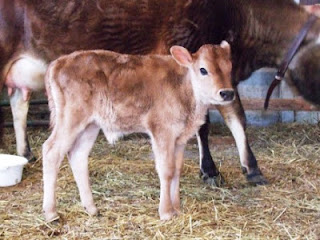 Finally, we've got Duncan to attend to.  He's our old ram who needs to go.  Again, somewhere.  Likely to Truro sale, but we've got to find someone heading to the sale on a Thursday and send him along as it's hard to justify a trip across for one old looking ram.  He just had one great last season with the ewes, but he looks to be in less-than-ideal condition and I'm certain he's blind. He also loses his cud often (likely a contributing factor to his condition), but he's been a friendly favorite, and effective ram, so I hate to just do him in (or get Mark to do him in).

The roosters have been doing their own winter clean up by fighting to a bloody mess for flock supremacy.  The two main dudes seem to have agreed upon having their own respective harems and trot around with their ladies behind them, staying away from the other group.  Bev, Roosti is holding his own after his first rough day, and I think he's one of the head coop bosses now, so you can rest easy. :)


Ah, the joys of owning livestock.
In more renewing news, the lambs are due to start coming any day and there are a few ewes looking especially...er...large.  :)

I am feeling overwhelmed with a few things outside of the farm these days, so am REALLY looking forward to December, which is thus far, promising to be a slow, low-key time of family, fun and traditions.  I have already turned down one request for my musical assistance, so that's a nice first I'm proud of.  We'll see how long I can hold out.

I've got something to say about the current trend in agriculture to deal with the symptom and not the problem, but not today.  Perhaps in December.  haha.

I was sent this quotation the other day and I think it is really truly beautiful.  Here's hoping you think the same:
"May the coyotes be struck blind at you chicken pens, may your earth worms be well fed, may your cows be well bred, may your house be a home, and may your children rise up and call you blessed." Joel Salatin

That Joel Salatin is a clever dude.