Not Dead, but nearly 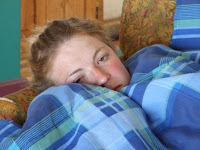 I think this kind of picture is payback for all the ones I post of Mark. Fair's fair.
I've made it as far as this posting page a few times over the last couple weeks, but then I would either be struck with another bout of stomach flu or be too exhausted to imagine a waking moment spent in an upright position, using my brain.  Mark and I were hit with a nasty bug and have been laid up for what seems like eternity now.  We're still not totally recovered, but at least we're able to go about our daily business, mostly as usual.  I think it's beginning to hit the kids now, so at least the good Lord was kind enough to let us get over it first (ugh).  In any case, there has been lots of excitement going on at the farm and I can't wait to update it all.  My camera is currently in a compartment on the four-wheeler, and I like to have pictures to go along with my posts, so it'll just have to wait until I remember to get it home.

If anyone is Charlottetown on Monday, the 16th, Chef Dianna Linder from Cafe Maplethrope and I will be showcasing our organic, pasture-raised chicken at the Certified Organic Producers Coop Tasting Booth at Old Home Week.  I'm not sure what kind of delicious little dish she's come up with, but I can promise it will be made using some fantastic chicken!  I will be taking orders and have lots of information available for anyone interested in getting some.  We are the only organic meat being showcased during the entire Old Home Week, so Monday is the day if you're a carnivore who cares about where their meat comes from!