Anyone left out there?

Well, I truly doubt if I have any followers left, so I'll just send this out into the internet-oblivion to prove to myself that I can still indeed write blog posts.  Whether they are worth reading is something else all together.
Too much has happened since I lost posted so here's a few highlights:
1)  I sold my sheep.  Well most of them. I couldn't part with them all, so I kept four ewes (which is a torture as far as Mark is concerned), but I sold the rest.  They are due to lamb any day and I have to say, knowing that, makes the decision seem like a really good one right about now.
2)  I've been coaching at derby which is way more fun than I anticipated and am considering doing a bit more of while I'm unavailable for skating.  I am bench-coaching at a game this weekend so that will be a good test, under pressure to see how much I actually like it.
3)  The senate has gone to pieces.  Seriously.  What is wrong with these people?  Harper couldn't find a single Islander to appoint back when he plucked Duffy out of the fray?  Well he won't have much more luck around here after this debacle, along with the EI changes and Shea's lack of represenatation for her own consituency.
4)  I attended the Organic Value Chain Roundtable meeting in Ottawa, which was a bit overwhelming but very interesting.  Although not really a top agenda item, the thing that had me most interested was that Quebec managed to pass a resolution at their UPA (basically the entire agricultural producers organization for the province) AGM essentially banning GMO alfalfa from being grown in the province.  It sounded to me like they sent out information to all grain producers informing them of the threat that GMO alfalfa would bring to the organic dairy industry, which (I think) helped ease the way for the resolution at the meeting.  They admitted that there was some resistance in the grain corner, but they compromised by removing the word 'moratorium', which is longer term and very final.  Even a baby step in the direction of acknowledging the threat the GM alfalfa holds is a significant recognition to GMO's in general I think.  Anyway, the whole meeting was interesting, but I was really taken with the progressiveness of Quebec on that particular subject.
5)  Mark has been spending every spare minute on his new grain cleaner.  It's bigger and better and is going to run like butter whenever he gets it going (if the parts and invoices keep on their current trajectory anyway).
6)  We've decided to switch to an outdoor furnace for heat next year.  I am anxious.
7)  I finally caved and registered Lucy for school in the early immersion program.  I lost a lengthy battle with the district over busing the late immersion school, but I figured I'll choose my battles and there will be more, and important ones to come.  (Which, if you're from the district, know that I pulled my horns back only to sharpen them up for the next round so don't be so rude to me next time.)
8)  Rosie is due in May so we're getting ready to dry her off.  We've got a couple weekend engagements coming up in early March, so we're drying her off a little early to save having to get a relief milker.  It seems like a good idea right now, but I may wish we hadn't when I have to start buying milk again.  Thankfully, Mark geared up a great electric milk separator a couple months ago so we've had skim milk and cream lately.  I've planned ahead and have several pounds of butter in the freezer.  Here's hoping it's enough to get us through to May!
9)  My resolution of getting up before everyone else has been a bit of a failure, but I've new resolve now.  I'm going to give it another go.  I'll probably just be getting a schedule down as the new arrives to throw it all off again.
10)  Despite a couple prolonged cold snaps, the chickens are still laying so we have lots of eggs!

What finally brought me back to the blog is something that has bothered me...well pretty much ever since I started attending meetings having to do with agriculture.  The word 'efficiency' has been touted as the savior of agriculture and the world ever since I can remember.  If only farmers could increase their efficiency, we'd all be better off.  Right?
Here's a couple of ads put out by an organization called Agriculture More Than Ever, which I think has something to do with Farm Credit, but that's not explicit in any of thier info, so we'll be naive and assume they are some independent organization set up to make everyone feel good about agriculture.  And they do a good job. 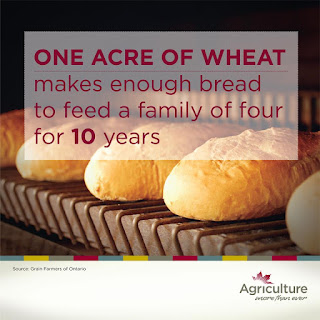 Don't you feel warm and fuzzy?


Well, let's look at these another way.
Firstly, how many people can't consume wheat products anymore?  The current gene pool for modern wheat is so shallow and specific that the things that used to make wheat palatable and healthy for us have been bred out to make way for 'efficiency'.  Old fashioned wheat maybe doesn't yield as well, or maybe it's more susceptible to disease or matures too slowly.  Some traits that don't suit the big-ag, food processing giants have left us with near generations of individuals who have now crossed 'gluten' off their list of things they can eat without discomfort.  At the ACORN conference in November, the bread baker used Speerville organic flours, made from older wheat varieties, grown here in the Maritimes.  A woman attending the conference who typically could not consume wheat, ate the bread without problem. 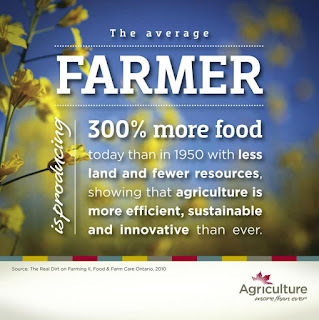 So congratulations big-ag, you're super efficient at producing wheat.  Too bad so few can enjoy it.

The second ad builds up the value of efficiency so much that it fails to acknowledge some of the big differences between the state of our land in 1950 compared to today.  In 1950, the soil and its inhabitants had only just begun to deal with the assault of years of pesticide use.  Giant factory farms and feedlots were not yet a norm of food production.  Environmental degradation, including water, air and soil quality were not a regular part of the discussion of producing food- and not necessarily because they weren't considered important.  Perhaps we simply have more reasons to consider them now.  "...with less land and fewer resources."  This sounds like it's straight out of a GMO advertisement for a variety of corn that withstands dry periods better.
I think I'm the most annoyed that they threw the word "sustainable" in there.  How many studies have to be done showing that small-scale, organic based systems are more sustainable in the long run before we start to acknowledge and support for THOSE systems.
It's sort of like that much-discussed ad from the Superbowl, by Dodge Ram, using that old Paul Harvey piece called, "So God Made a Farmer".  It's touching and it brings me to tears everytime, because the farmer described in the piece is exactly the kind of farmers I grew up around, and married and aspire to be.  But they are so rare in the big picture of today.  And it's not fair to play that for North America and pretend that those images and those descriptions are accurate to how we're fed today.  A more accurate ad would have had pictures of factory farms and long lines of carcasses in mega abattoirs, and processed foods and people in board rooms selling seed and buying feed based on some futures market 2 years down the road.  It makes everyone feel better about the weird processed ham product they put in their kids sandwich and continues the lie of healthy food that we're fed by big-ag, taking advantage of the cutesy small town feeling of yore.
I am glad that God made a farmer. And I'm glad that two raised me, and that I married one.  I'm just sad that more people don't have that luxury and don't know what they're missing.