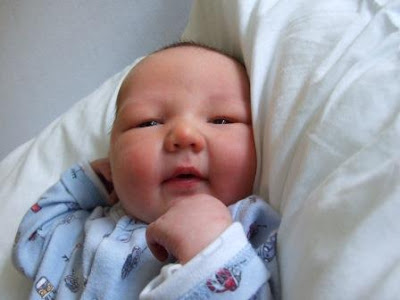 Sunday morning at 7 am, little Solomon Mark Bernard arrived on the scene, as bright eyed and bushy-tailed as could be. 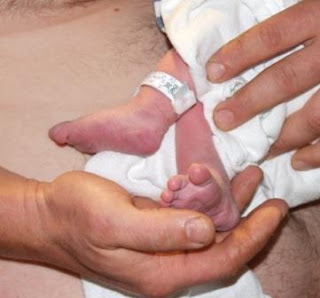 We were convinced he was tiny (and he sure looks it to us), but the scale revealed a chubby 9lb 6oz'er. 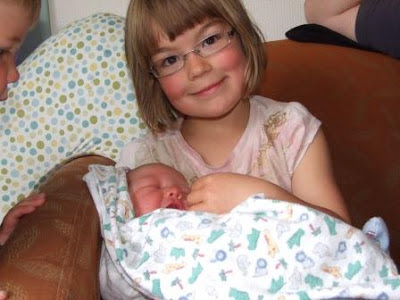 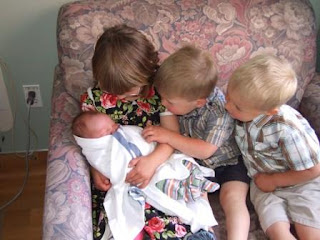 There's no shortage of attention and curiosity.  Sol will be well supervised for a little while at least. 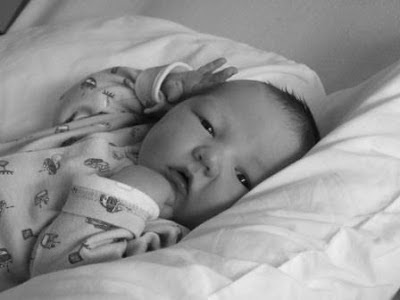 His name took a while to come to us, but once we settled on it, it seems to fit him perfectly.  We intend to call him Sol for everyday use and the particular spelling is because in french, 'sol' translates to ground or soil, which is especially appropriate for our family and farm.  Of course, Solomon also means peaceful and wise, so here's hoping he catches some of that as well.  :)

The crops all jumped while we were in the hospital for a couple days and the air is beautiful out there tonight.  Happy to be back on home turf and at such a perfect time of year.

I keep meaning to get out to the farm with my camera in hand to show you all the heart-warming sights around these days.  You've never seen happier pigs than the five we've got slowly rooting their way through the used-to-be sheep pasture.  Or a happier little girl rolling around amongst them, making best of friends with each and every one.  Our new chicken tractors are dreams compared to our old ones, which we were pretty proud of at the time.  They're truly palaces and so far, exceed our expectations.  The new winch system is so much smoother than the old dolly cart and filling water and feed is much easier.  We had a minor miscalculation of how many birds we ended up getting with our first batch, so have three pens on the go, but hope to do an early kill of some of the bigger ones so that will alleviate some of the space crunch as the next ones get ready to go out.  More babies arrive tomorrow (at the wierd time of between 4 and 8 pm?).  Batch number three.

The cow and calf are doing well although Rosie continues to demonstrate her independence and personality by frequently refusing to come in at milking time and making for a chase and round-up situation that is annoying when it's chore time and cranky kids need to get to bed.  Having Duffy egg her on by tearing around, heels kicked up and dancing among the dandelions doesn't help either.
The crops are looking really good.  Wheat and barley is well up and looking 'the best it ever has' (boy am I looking to knock on some wood with this entry so far eh!?) according to Mark and when I look at our cashflow, it should.  We spent some extra resources this spring on some fertility inputs that should balance the soil better.  We also put on more lime than we have in recent years, again to help balance the soil and help make everything as available as possible.  As I've been driving by looking at all the fields of corn and grain coming up around the Island and noticing all the weeds (mostly cooch grass) I've been silently patting Mark on the back for all his hard work because although those weeds in the neighbours' fields won't be there in a week or two when the herbicide kicks in, the true health of the soil can be seen right now, when things are new and before chemicals get to play their part and it seems clear to me that our soil is particularly happy.

I've been thinking more and more about soil and how we so often fail to recognize that it is the living being upon which we produce all the things we use as benchmarks for success.  If we treated it like an animal or a fellow human being, how much healthier would the world be?  How much healthier would our food be?  It truly is a living thing, so indulge me in my little analogy here for a minute.

If we only eat fast food (chemical fertilizers to soil) what happens?  Our health starts to deteriorate.  We aren't as productive, we get sluggish.  But we continue to need more calories to survive and it's easy food, so we become dependent on it.  Or if, in the same vein, we are worked too hard, without a varied diet, we begin to suffer.  If our needs aren't fully met, it begins to show in our production, in our health and in what we can provide.  If soil doesn't have organic matter to help it hold water, it gets dry, worn out, fails to produce.  If the microorganisms are starved for nutrients and worse, killed off by fumigant and excessive tillage, the soil begins to die, literally.  It must be re-filled with synthetic nutrients.  If liquid dairy manure is layered on, year after year, it is so acidic that it literally leaves a wasteland of dead earthworms in it's wake.  We wouldn't wash ourselves in vinegar, why would we think it's a good idea to coat the soil is such a highly acidic input, no matter the nitrogen value?  If I look out and picture each field as it's own self-contained being, living thing, it is much easier to see the importance of a 'healthy, balanced soil' and the importance of NOT treating it as a benign, empty vessel to be used as we see fit, custom fed for our specific, short term needs.
I always struggle to explain to the elementary school kids who tour here, what exactly organic is, but I think this whole metaphor of making the soil the priority and treating it like it's very own animal, is something I can break down and elaborate on, that is visual enough, but also interesting enough to help begin the thought process.  Then again, all they're going to remember from the tour is when that one pig peed on the other pig, so I could save my breath. :)

Have you heard  A variety of GM alfalfa has been registered for sale in Canada!  Get in line quick, you won't want to miss out on this miracle crop I'm sure.

Still waiting on baby #4, but I decided today that instead of sitting and waiting and wishing, I would remember the realities of having a newborn, and enjoy my relative independence right now.  I could use a lesson from Rosie and go for a rip through the dandelions at chore time, rather than being tied down to a rocking chair or bed or whatever other newborn torture device I'll be subject to when it does finally arrive.  So until it comes, whenever that may be, the kids and I are living it up.  We had a bonfire tonight while Mark was gone to a meeting and I don't know that I've ever seen a child with such an endless thirst for raw marshmallows as Thayne.  He had no interest in the roasted ones, but was certainly able to pack away the raw ones in a hurry.  Evidently, he's recovering from his chest infection last week.  If that many marshmallows doesn't kill ya, it can only make you stronger, right?

Hope this finds you enjoying the scent of a freshly mowed lawn or lilacs or the sight of lupins on the side of the road.