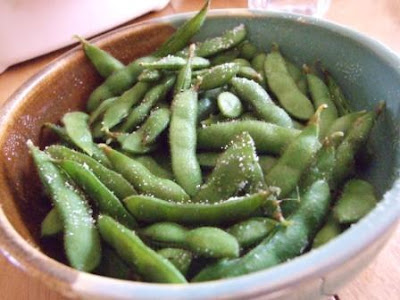 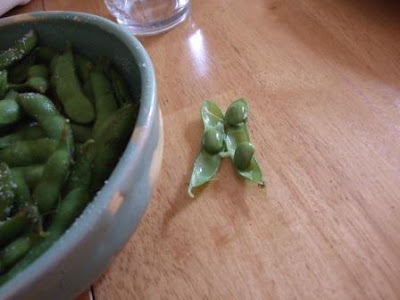 If you recall I wrote a post quite a few months ago about our growing edamame (corrected pronounciation= ed-a-MA-may) for the first time. I think I mentioned that I had tried it once when Mark's sister (who travels extensively throughout Asia) cooked it for us and I think I also mentioned that I hadn't really liked it. Well, last night the kids and I went out to the soybean field and picked off the plumpest looking pods. I was skeptical as I dropped them into the pot of boiling water. Then I promptly forgot about them. With the other three burners occupied, the oven full, two kids howling, a friend over trying to do a bit of work, and Mark on his way home for supper, the new edamame wasn't top of the list. Anyway, a few minutes later I remembered it and jumped to drain it, thinking that I had probably over cooked it. I dumped them into a bowl, sprinkled with sea salt (like I'd seen on the pictures on the internet) and set them on the table. A few minutes later, we were all delving in, delighted in the deliciousness of the delicate beans (ahhh, alliteration!). I had heard that you're supposed to treat them like an appetizer at a bar, like peanuts sitting on the table. So we sat around cracking them open and popping the little beans in our mouths. The salt made a big difference, but the beans had a very distinct but subtle flavour themselves. Everyone was sure I had buttered them (I had to stop and think for a second myself), because they had a real tender, buttery flavour, but nope that wasn't me. I think part of the mystery is that the pods are so tough and almost hairy that it's hard to let yourself imagine that inside there is a veritable bubble of soft, smooth flavour waiting to be enjoyed.

Anyway, the overall prognosis was that it was amazing and we look forward to more of it! Tomoko, our Japanese connection at the Summerside Market will be looking for some, and I think we may actually have a table at the market ourselves this Saturday. It will be good experience whether we do it again or not. We've got to sell our chickens before the next batch are ready and I'd like to get some orders going for my lambs, who will be finishing over the next few weeks (I hope!). So, look for us there!! The few sunflowers that DID germinate this year are in bloom and beautiful!
I wrote that first part last week sometime and am only finishing the rest of this entry now.
I've got much to write about this past week, since we took a bit of a vacation from the farm and enjoyed some time at home (MY home, West Branch, NB) and then on Sunday took part in the Meal in the Field. But alas, all that will have to wait until I have more time, or a baby who sleeps during the day. Until then, hope all is well in your corner of the world!