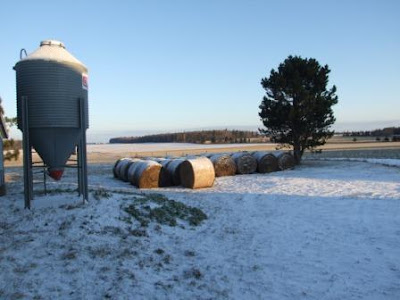 The Christmas tree salespeople have been on the news lately complaining of low sales as apparently the sale of artificial trees is growing each year.  They said that the lack of snow is one of the main reasons that people haven't bought their trees yet, so they should be happy today.  We've gotten a pretty, nice little dusting over the last couple days and there is just enough to make things sparkly without needing a shovel.  It's supposed to turn mild tomorrow, so we might take advantage of the frost in the ground today to go find ours, even though we won't put it up for at least another week.  The spot on the farm that seems to have the most fir trees borders a plowed field this year, so it's going to be a bumpy ride back (and we hope the tree survives with only one busted up side after being hauled behind whatever implement we choose to go back with), but adventurous as usual.

I haven't posted in a while, for no real significant reason.  I'm starting to slow down (rather reluctantly) and am getting more tired everyday, so when I would usually be writing a blog entry, I am instead laid out somewhere, 'vegging' as they say.  Lambs have started to arrive (a couple days late for the Sunday School concert photos) and so far so good.  The first guy was big and had to be pulled and he looks like he's three weeks old already. He's got the cute North Country Cheviot face and proves his heritage by being an excellent jumper (Cheviots are notoriously 'crazy' and jumpy). 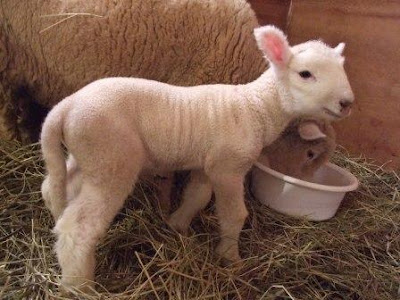 In other sheep news, we have finally purchased our own ram.  After trading with my mom and trying out the renting thing, it only made sense that as we're trying to be a fairly closed flock and we're organic, we have our own man about town, if you will.  He's young yet, but turning out to be a handsome fellow.  We'll see how his progeny turns out when my second batch of ladies start to lamb in March.  Although I like having the Cheviot blood in my flock, there seems to be a bit of a market developing for purebred breeding stock right now, so it will be nice to have some pure dorsets around again. Sticking with the ruminants, milking has fallen into a nice little routine of milking as much as we need/want in the morning, letting the calf out for the day, then shutting her in at night when we feed Rosie so that there will be lots of milk in the morning again.  We seem to have rid Rosie of most of her annoying mannerisms while milking, although my patience wears thinner much quicker than Mark's on most days (no surprise there I'm sure).  I'm including a rare picture of me (or rather, mostly just my ample nose) milking the cow in my "beautiful pea green boat' as Mark so affectionately calls my self-made maternity one-piece snow suit.  It's only self made in that nearly all the seams in the back have been completely ripped out to make room in the front for a growing belly.  And since I washed it a couple weeks ago, most of the seams on the inside have let go as well, so the pockets no longer hold anything and half the time I shove my hand or feet into the stuffing rather than into a sleeve.  But it does the job, so no complaints here.  Only from Mark who seems mortified everytime I put it on (even though we're only going to the barn!). 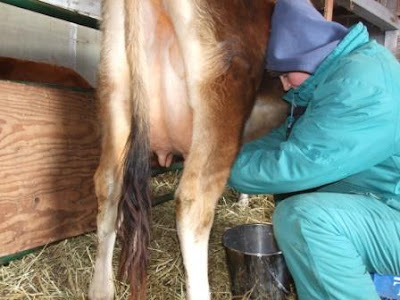 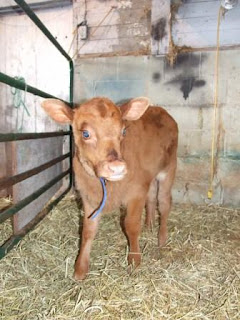 
On our first milk product adventure we made butter, which actually turned out far better than I expected.  It was really easy (ok ok, Mark did the hardest part-shaking the cream) and is pretty much exactly the same as 'boughten'.  Cream seems to carry more of a 'homemade' milk flavour than the milk itself, and my 'delicate palate' (har har) can pick it up in the butter, but overall, I was pretty impressed. 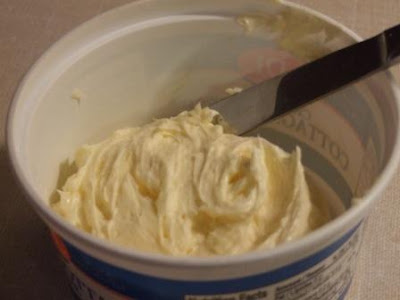 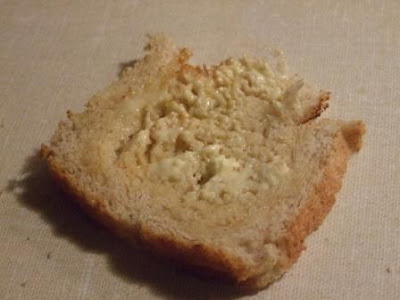 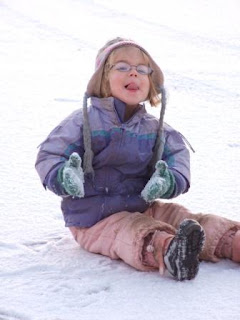 Here's my little snow bunny, after my own heart, gathering up as much of a handful of the white stuff as she can to have a little snack first thing this beautiful morning.
The Sunday School concert is next week, which means today is our last practice, so I'd better go get my Nativity Scene director's hat on (and maybe tie on a few extra patience to boot).  I hear Mark battling over church clothes with our increasingly independent duo upstairs, I'd better go begin my own battle with the closet of muumuus.

Hope this finds your squinting at the snow in the sunlight, or at least enjoying the view of whatever is out your window today.