For the Love of Life 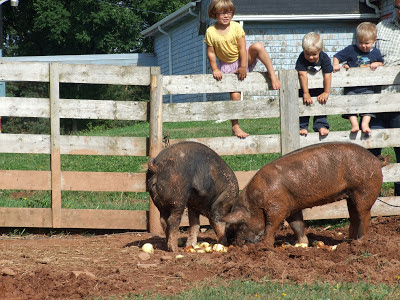 I've been eager to get on here and write about the latest W5 episode regarding factory farming, in particular in the pork industry in Canada and some of the hidden camera footage taken in a hog barn in Manitoba.  I've been reading several responses from people within the pork industry and every one of them has been less-than-satisfactory as far as I'm concerned, but one in particular caught my eye.  It was the response from a large-scale hog producer who basically said that although the footage was perhaps taken from a less-than-perfect farm, the procedures (castration without anethesia, farrowing crates, etc) are all pretty standard fare in the industry as a whole.  His bottom line however was that although he appreciates human treatment of animals, what really drives him is his 'desire to feed the world'.  And it's because of that desire to feed people that he produces pork like he does. Basically he put the responsibility on the consumer who continues to demand cheap food.
It was curious to me that what I interpreted was that he would rather raise them a different, perhaps better way, but given the pressures of economic reality and consumer demand, he is forced to confine sows to crates for life and raise weaners on slated floors in a crowded, closed buildings, feeding cheap GMOs and lots of antibiotics to keep them 'healthy'/growing.  So who's responsible for it?  The consumer?  The farmer?  I just thought it was an interesting pass of the buck.
But refreshing to see that he didn't deny the legitimacy of the piece, although slightly sensationalized. Too bad the show likely won't make any difference to 99% of pork buyers.

I've been in the midst of lambing, although that gives the impression that it's a thrill of action in the barn, lambs left and right.  In reality, it's just me checking ewes late at night and early morning in anticipation of action and one arriving every week and half or so.  The first one arrived on December 2nd and there have been three lamb since.  Yawn.
Last night was perhaps the most eventful lambing to date, for me personally.  The ewe had been acting strange all day, but not showing any distress or physical signs of much of anything.  By late last night I decided it was time to investigate, to discover a lamb turned completely backwards and legs tucked right up front.  Hearing echoes in my head from all my British friends claiming that pregnant women should never handle unborn/dead lambs (due to abortive diseases that can pass between ewe and woman), I gave one good try at figuring out the mess inside, but was unable to make heads or tails of it (ha! I think I just discovered the origin of that phrase!)
Anyway, thankfully my fearless husband, who grew up without livestock and has bravely jumped headfirst into animal husbandry was able to get in far enough (shoulder deep), with enough strength to get the huge lamb pulled out.  Both it and it's twin that followed were dead, due mostly to our having not intervened earlier I think.

But it was while I was having the emotional struggle of pulling this lamb I knew would be too big and assumed would be dead that I thought of the horrific shooting in Connecticut on Friday.  While I watched the mother eagerly, hopefully licking off this new lamb who was not responding nor ever would, I thought about all the people in world who never get to feel the heartache of bringing a life or lost life into the world.  Who never get to see something open its eyes to the world for the first time, or feel the deep, empty, gut wrenching hole of loss and sense of despair when it doesn't.  So many discussions of gun control, mental health assistance, security, religion, etc. and I don't think that there is any one solution to be had or sense to be made of these dark tragedies, but I can't help but wonder if we all had to go through the agony, anxiety, triumph and joy of raising a life besides our own, from a young age, if we would not all have a better grasp of life and death and the sometimes tenuous line between the two.   There is something very particular about the poignancy of assisted birthing or more harshly, the necessity of a death to relieve suffering, that cannot be found in any other part of the human experience.  Farmers often outwardly shake off the disappointment and sadness of an unexpected livestock loss, but I don't know if any of them could honestly deny the internal battle it wages on a heart.

The schools at home did a thing a few years ago and maybe they still do, called, "Roots of Empathy" where a local mom would bring in her new baby throughout it's first few months of life and the class would take a sort of ownership over him or her and monitor the growth and development and participate in things like bathing, feeding, etc.  This connection to human life is likely something most of us take for granted as a part of being in a family or having friends with kids, etc. but it really is a beautiful example of what I'm talking about, except on the human scale.

In some ways the second part of this post is directly related to the first, in which I think to achieve peace in our hearts (and elsewhere), we need to learn and show the respect we desire to the other living things around us.  Sounds pretty basic when put like that, but it felt complex last night in the cold barn as I sat and watched the ewe deliver the second dead lamb, giving it a lick before returning to the first in what I can only assume was a revival attempt, realizing the futility of helping the second.

Then, following church today, in which our minister reminded us of the scripture in John that affirms that the darkness will never overcome the light, I went to the barn to find a brand new set of bouncing, contented lamb twins, mother calmly taking stock of her two achievements and bleating quietly, gently to keep them nearby.  The circle of life continues and the darkness truly never will overcome the light.

Prayers, tears and thoughts be with the families who now know all too well the heartache of ones taken far too soon.