So, remember me?  It's been so long since I've posted on here that I feel a bit intimidated looking at this empty white space I'm expected to fill.  But I have great intentions of getting my blogger groove back on.  I've gotten myself off Facebook so have lots of grand plans for all the freetime I'll be enjoying that was previously eaten up by whatever it is that Facebook saw fit to feed me all day.
But to ease my transition back into this, I'm going to cheat a little bit.  I'm going to copy and paste my notes from my recent keynote address at the PEI Food Security Network AGM.  It was a great group of concerned individuals from a variety of backgrounds, across the PEI, coming together in the name of food security, locally.  If you haven't already heard, 2014 is the year of the Family Farm, so I was asked to incorporate that into the theme of my talk.
I started out with a little visual tour of the farm, using photos and sharing details of what we do, how we do it, etc.  I am going to leave that part of out of this post, since it's not news to you, and because it's kind of the foundation for nearly all the talks both Mark and I do, so you can find out nearly all of it by reading this blog, or checking our website.  So the notes below, start after I've done the first 13 slides of farm description stuff.  I'll toss in some pictures now and then so you can really pretend you were there. :)
_______________________________________________________________________________


So that’s my farm.  What kind of farmer am I?  I guess I usually say we’re organic grain farmers.  But we could also be called chicken farmers. Or egg farmers.  Even cash crop farmers.  We’re also a family farm. 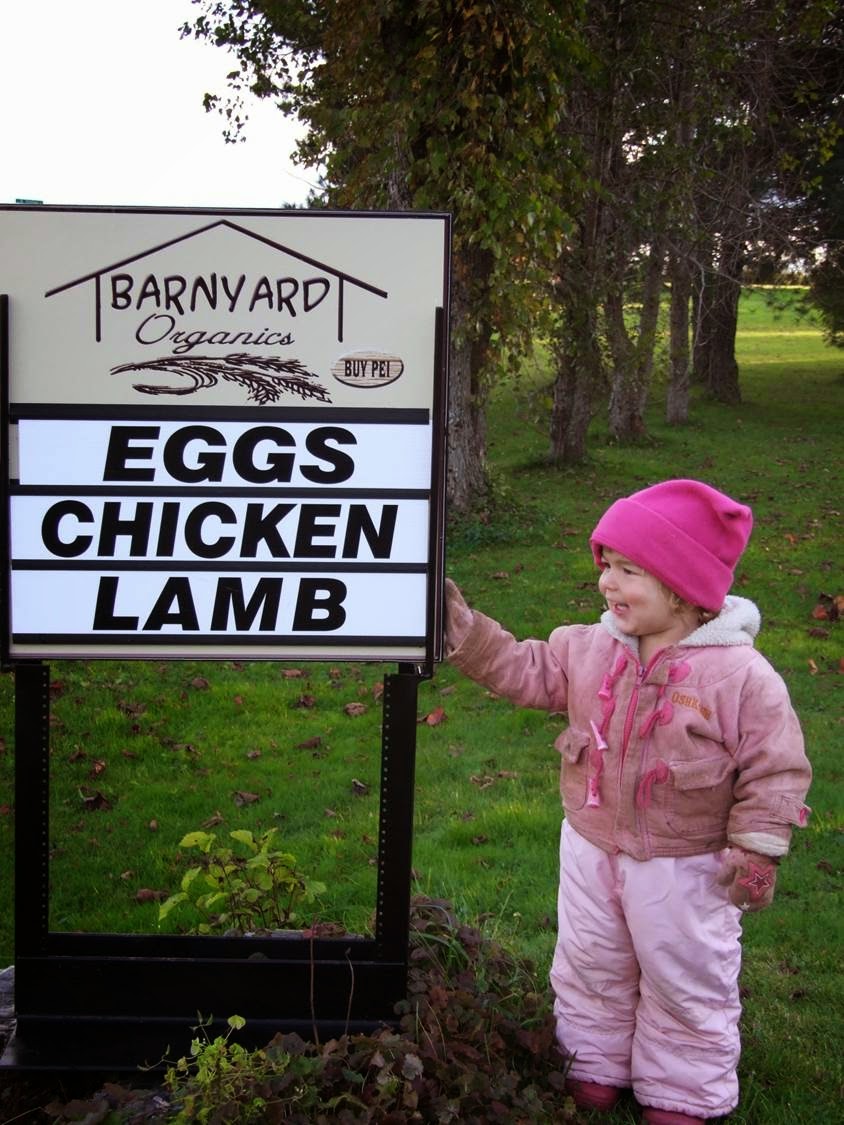 It’s easy to get caught up in the imagery of ‘family farms” and “small, local agriculture”, but we all know those are subjective terms. What is a family farm?  I’m sure the McCains and the Irvings consider themselves a family, and they have a farm, right?  And small farms here are a lot different than small farms even in Quebec, let alone on the prairies.  So let’s forget about trying to label certain operations as small, or local or family operated, and let’s focus instead on what we are producing.

Now what does a family farmer produce?

The kids and I spend a fair bit of time on the farm.  We don’t accomplish much of substance. In fact, from a managers perspective, we probably make it worse most of the time.  But I still consider myself a farmer.  And if you were to ask me what is that I’m farming I’d probably say…”chickens”.  But in my head I’d be thinking “farmers”.
Like any crop, you give it a good start, feed it well, work hard, pray a lot and hope for the best. But you don’t know the results until they’re grown up.  Maybe my yield will be terrible.   Maybe my crop will look good all along and then be a crop failure.  Maybe I’m not actually a very good farmer farmer after all.  That remains to be seen.


All farms produce some important, usable product.  There is perhaps no more important product than farmers.  To produce and grow farmers is an art that has been lost. The exodus we’ve stood by and watched as farms have gotten bigger and more ‘innovative’ and ‘efficient’, as farm kids move to urban centers and get secure jobs, with regular paycheques, proves that we’re losing the ability to grow farmers.


When big farms are so mechanized that the farmers themselves never actually come in direct contact with the animal or the crop and rely instead on technology and the knowledge of those ‘experts’ outside the farm itself, it is no longer growing farmers. It is growing a business.  Perhaps a very successful one.  Perhaps one that grosses a lot of money and maybe there will be a young person who is excited by the possibility of making a lot of money, but it is not growing farmers. 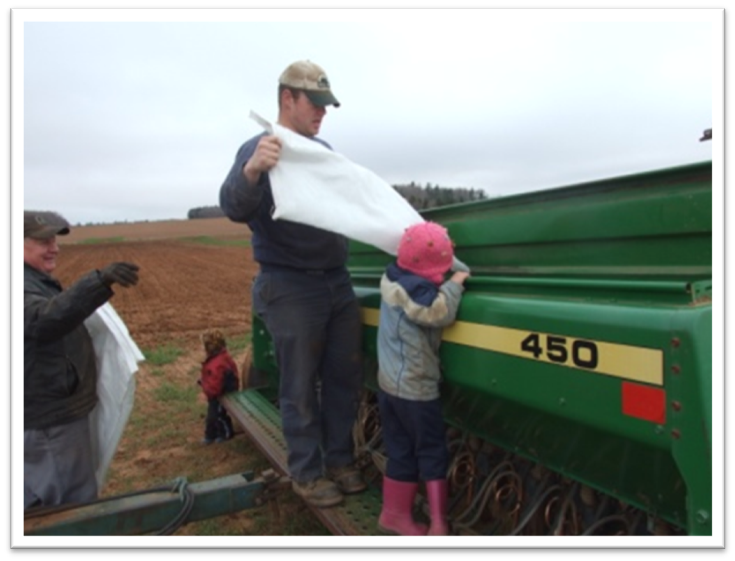 And, from experience, it takes a lot of work and resources to grow farmers. Thinking of the effort my parents made to grow farmers, I now recognize that it is not something that happens by itself.  It takes great patience to help a little girl train a big steer to want to be led around the farm yard by a rope.  It takes hopefulness to give your best ewe to your daughter for Christmas so that her next batch of lambs can be registered under her name, to start her own flock.  It requires nerves of steel to let teenagers run tools and machines. 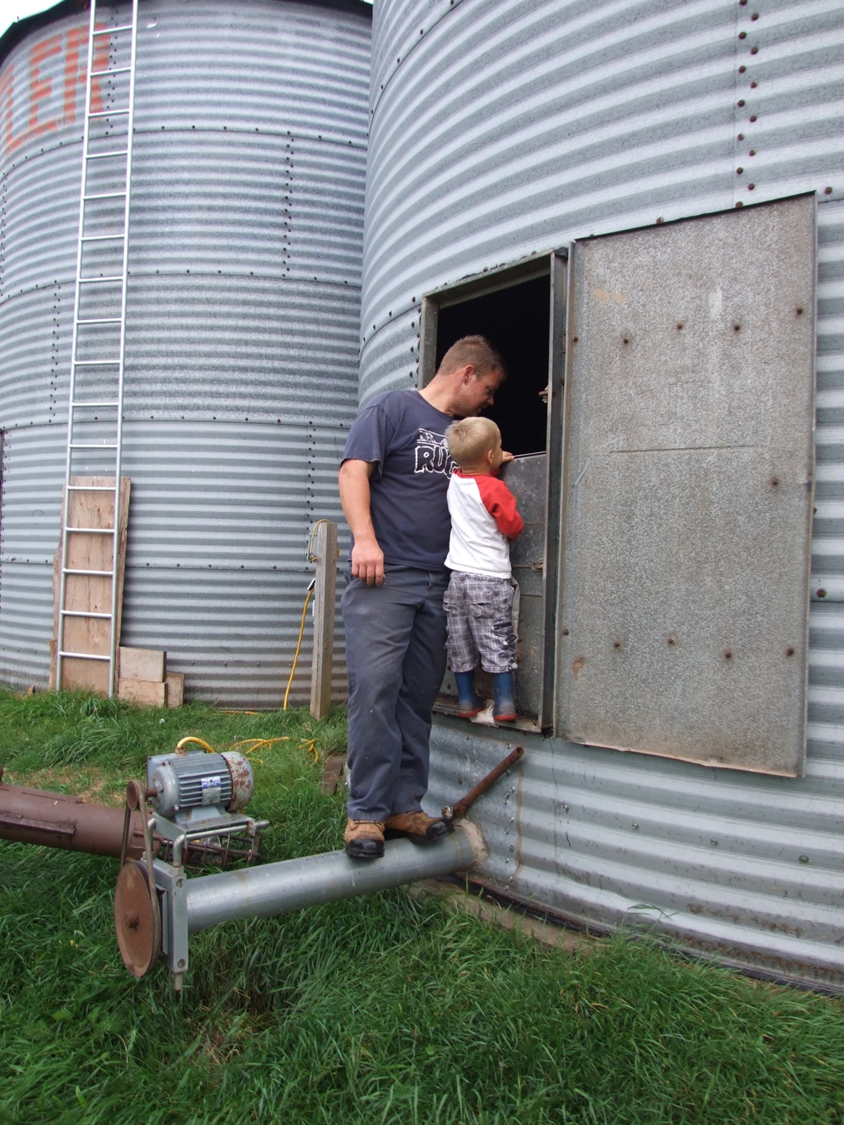 From personal experience, there is little more frustrating than being under pressure to get a job done, and watching tiny fingers try to figure out the intricacies of opening a bag. Or being eager to get home after a long day, but taking the time to sit in with the pigs and figure out personality-appropriate names. Two weeks ago we had 300 chicks arriving the next day and were working hard to get the brooder room built and insulated after a winter of letting it fall to the bottom of the priority list.  And it was patience-testing to watch three kids under 6 take turns running the drill, stripping screws, reversing the bits and dropping the heavy drill, but were they ever proud of the job once it was (finally) done. It probably took nearly an extra hour from what their father could have done by himself, but for an hour that was forgotten by us by the end of the day, it was an hour they may never forget. 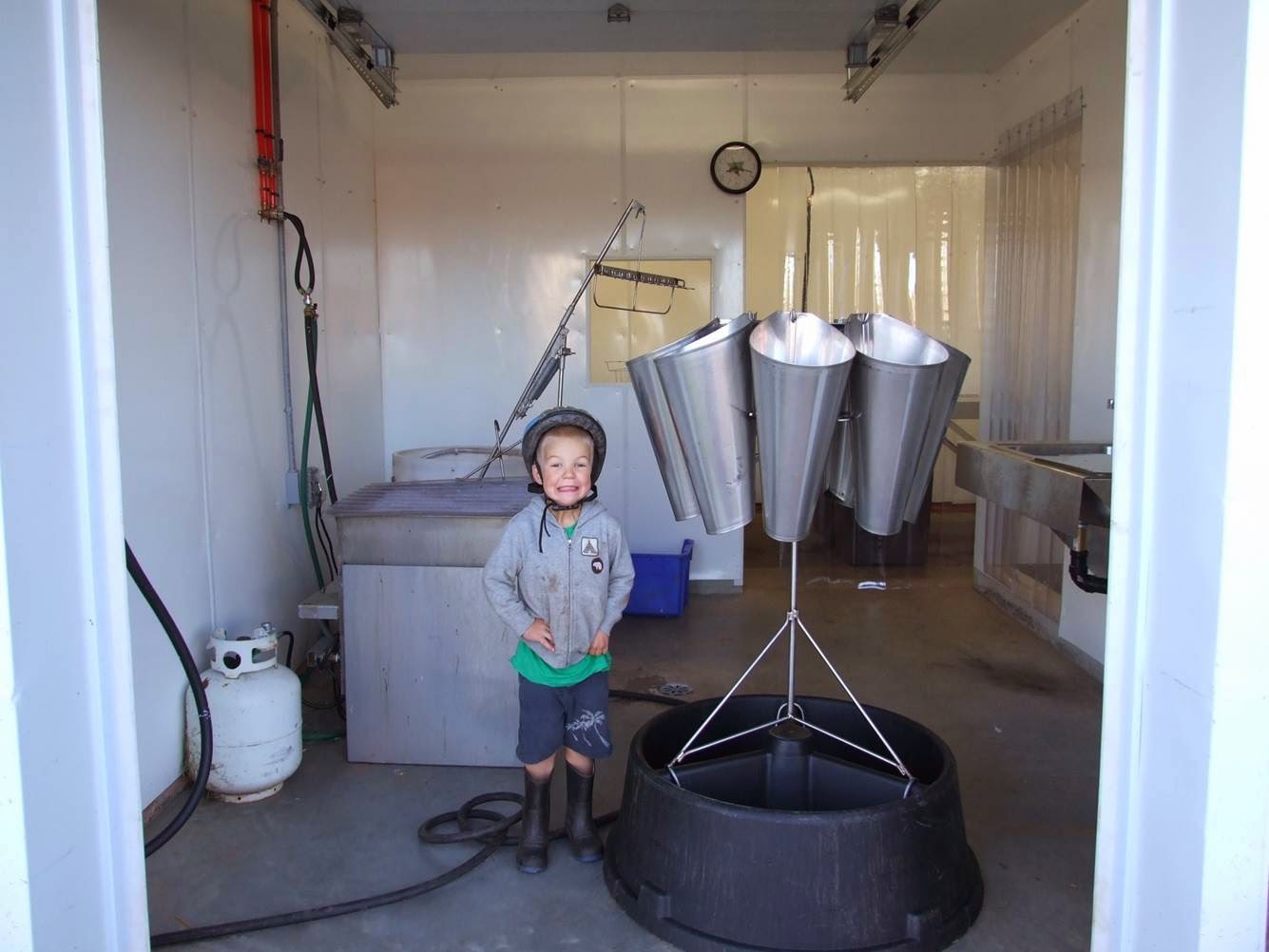 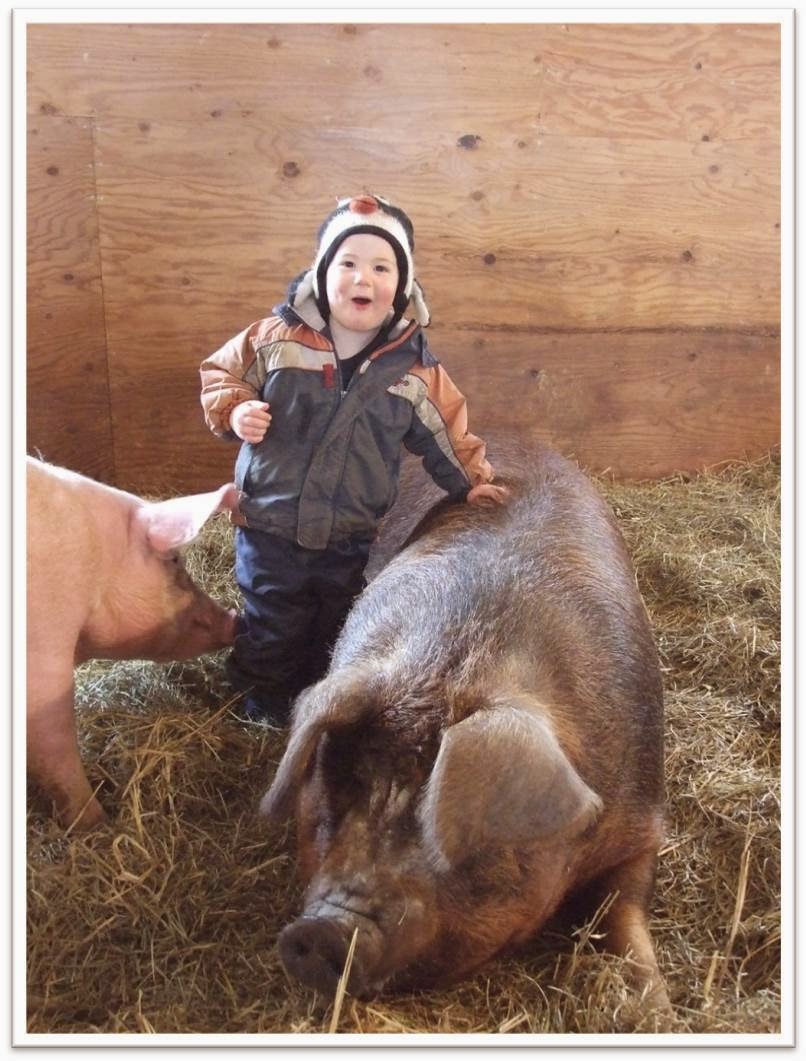 The lesson of life and death is one that family farmers in particular, appreciate with a depth not found on other farms.  With kids, it is a necessity of life, filtering and understanding the connection between birthing something, growing something, killing something and eating something.  It’s not an easy lesson and some are harder than others, but it’s one that isn’t found on non-family farms.  Having the appreciation for life, and the solidarity of hurting over an unexpected death or particularly difficult end-of-life decision creates a bond between the farmers in the family.

And I’m not talking only about kids.  I recently ran a workshop at our on-farm poultry processing facility for individuals interested in learning how to process their own chickens.  In the pre-amble we talked of our experiences with various poultry and as happens with farmers, the chat grew and expanded and everyone ended up spending far beyond the allotted time, just sharing in the challenges and successes that come with family farming.  There was an unspoken, shared mood in the killing room as we came to terms with our role in the circle of life and one that I think can only be found on a truly family farm.

The gift of mentoring and apprenticing on farms is a beautifully visible sign of growing farmers.  As an apprentice gains confidence over the season and begins to notice, for themselves, subtle changes in the plants or better yet, the soil, a farmer is grown.  And in turn, as the mentor begins to feel they can, with confidence, hand over significant responsibilities to the apprentice, their own load is lightened and they know they have begun to grow a farmer. 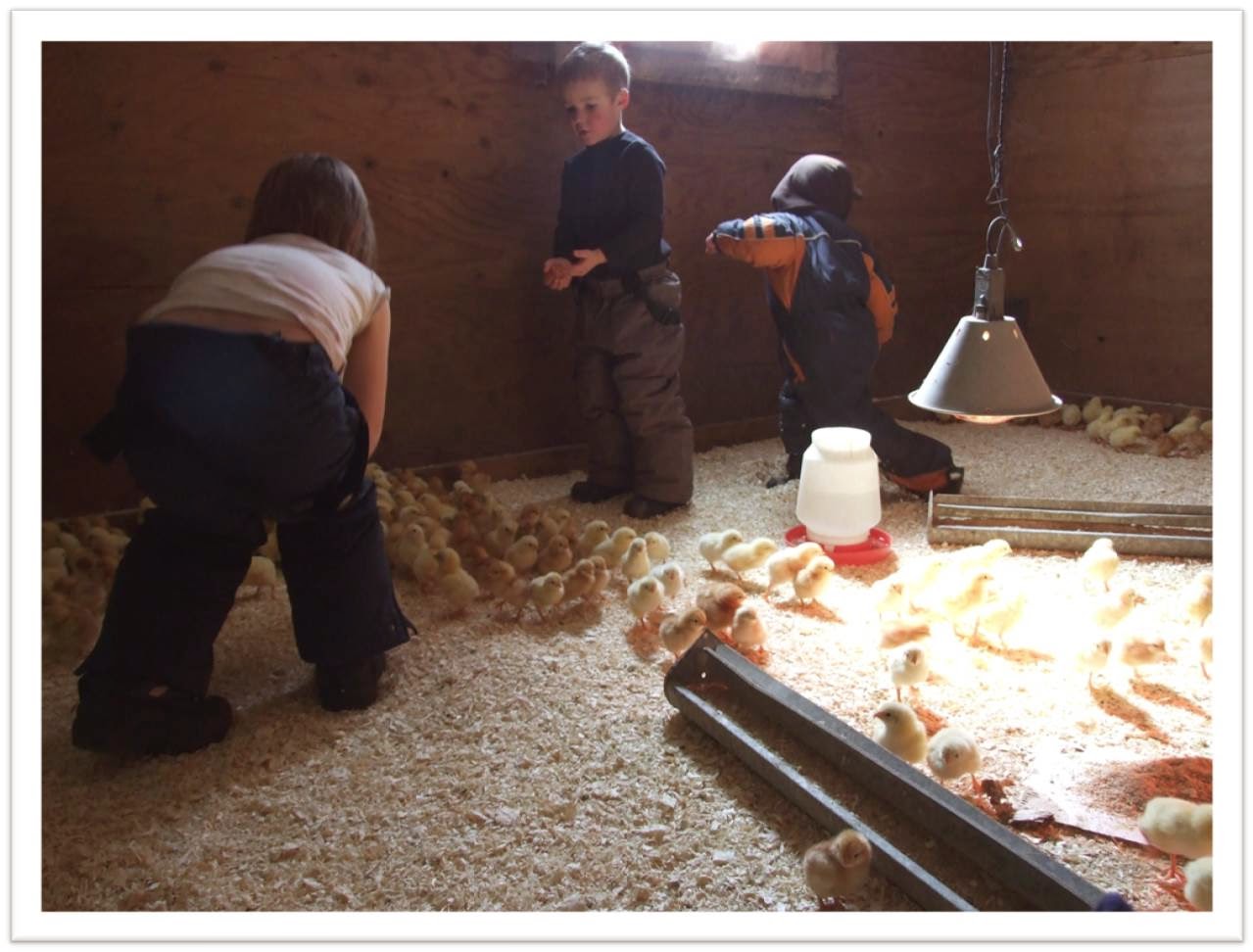 It is not a responsibility to be taken lightly, growing a farmer.   Have I gotten away from my main point? Family farming?  But no.  For we all know that is nigh impossible to farm by oneself.  Farmers are by nature, team players.  They want partners in crime and sometimes those partners in crime, lead to more tiny partners.  Thus, we have farm families.


Given that this is the Food Security Network AGM,  I would suggest true food security relies not on increased food production, technology and efficiency, but on an increase in true family farmers.  We are increasingly fed by businesses and managers, but our food sovereignty will rely on farmers who will in turn grow more farmers and families.


And there is no one in particular to blame for the lost art of growing farmers.  Smaller and smaller margins have resulted in farmers having less time, fewer resources and shorter patience for the time-consuming task of teaching and sharing the love of agriculture.  I strongly believe the low cost of industrial food and a disconnect to the eater has had a direct impact on farmers’ ability to grow farmers.  So let’s vote with our food choices and support farming family farmers so that we can ensure truly sustainable food production for the future. 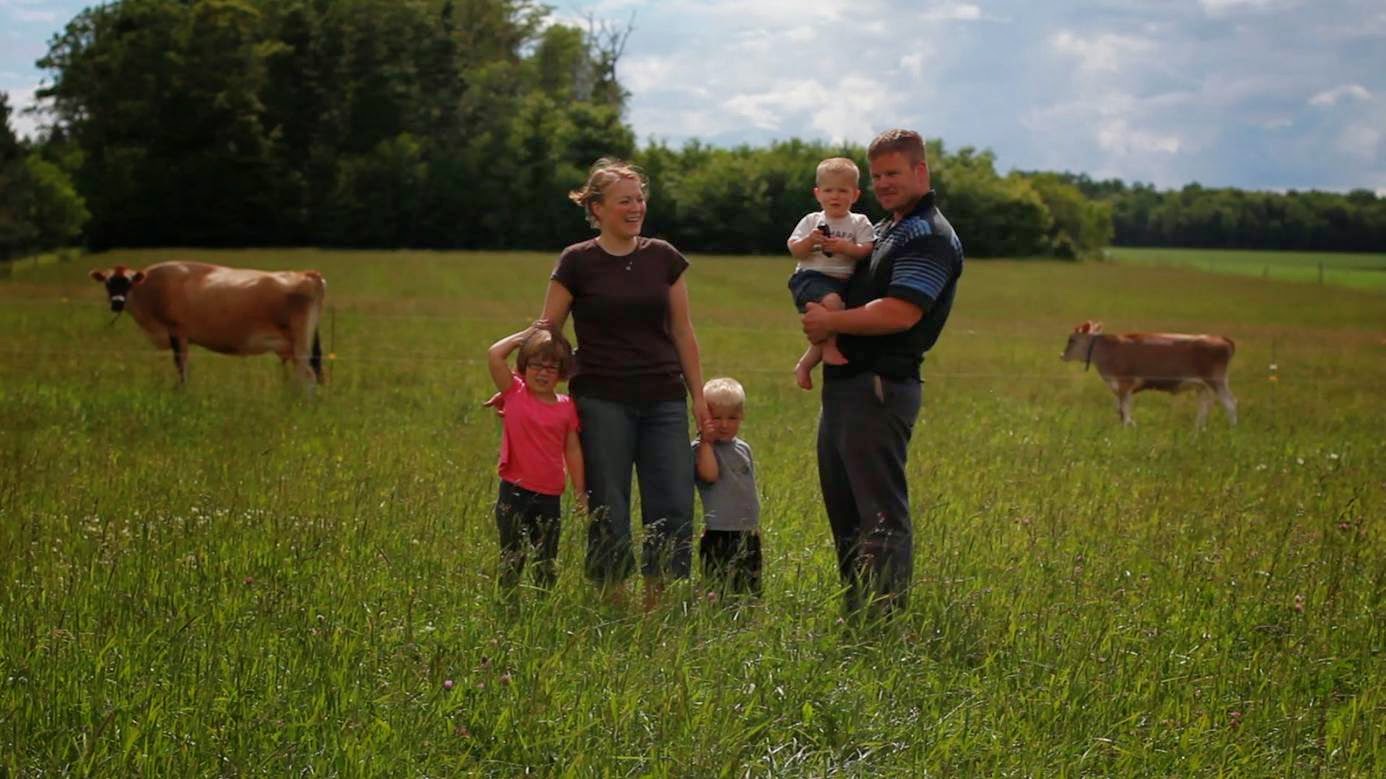 So that's that.  I would like to acknowledge that last photo which is a still from Mille Clarke's film Island Green, which coincidentally played after the AGM I spoke at.  And no matter how many times I see it, it makes me cry with its sheer beauty everytime.  And at the same time invigorates my sometimes tired spirit.

May this find you enjoying the smell of drying, spring earth and anticipating the first chirp of spring peepers.