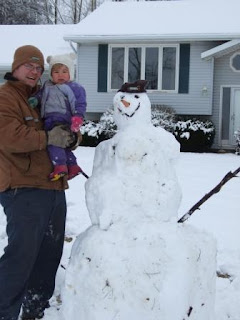 As I'm sure almost all of you are more than aware, the Easter bunny brought more than just chocolate with him to the Maritimes this year. We woke up to as much snow as we could believe. Check out our big snowman we made to 'celebrate' what we are sure must be the end of winter. Just the weekend before, I was out in flip flops and short pants, enjoying the sun like a cat on our asphalt driveway while Lucy batted a ball around, without the cumbersome snow pants she's become so used to.

While most of the snow has managed to melt away, there is still lots around the hedgerows and where there were large drifts, and much to Lucy's delight, Mr. Snowman is still hanging tough (down to his last..er... ball..., but still there). 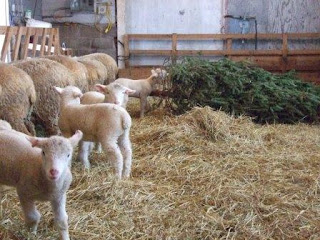 Just to add to your confusion as to just what season it is, it happened by chance, that Mark's sister, Martha dropped off her still very green Christmas tree at the farm on the Saturday before Easter, as a place to get rid of it. My parents always fed their tree to our sheep, so I continued the 'tradition' here on the island and this year at Christmas, Mark noticed something peculiar. Prior to feeding it, we had a couple ewes showing 'daggy' bums (sign of the runs) and figured it meant a potential parasite problem (it's one of the common indicators). About a week after the tree had been in the pen and was getting pretty well cleaned up, the ewes 'dried up' as well. We don't know if it was a coincidence or a medical marvel, but we know the sheep really love the trees and it's nice to be able to give them some green matter this time of year. I question the nutrient value, but it certainly can't hurt. Maybe I should pass this on to some master's student desperate for a topic and let them figure out if there's any actual value or not. The lambs certainly loved picking away at it.

Speaking of the lambs, they are really growing and eating more and more everyday. Feeding grain in an organic system is always a discussion, and creep feed (feed especially for lambs) is no exception. It is generally accepted in the organic industry that sheep and cattle are not really originally designed to eat grains, that they are really strictly grass/forage eaters. It is also generally accepted in most other circles that producing livestock profitably (up to a saleable weight in a reasonable amount of time) involves some amount of grain. Anyone who is in a sheep barn at feeding time would question the person who says they are only grass eaters- the racket is unbelievable while they 'wait' for the grain bucket to rattle down the feed alley. 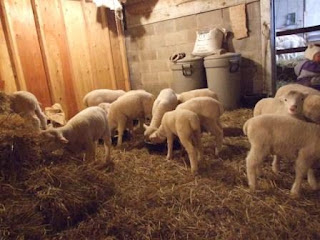 We quickly discovered that given a mix of whole oats and roasted soybean meal (like their mothers are given), the lambs were very adept at picking through the oats to clean up only the sweet soybeans, leaving piles of oats on the floor, in the corners, in the dishes, etc. So I got my personal miller (Mark) to grind up my oats to the same consistency as my soybean meal and I've successfully tricked the lambs into eating it all! As you can see in the picture above with the little guy on the right licking his lips, it's darn good stuff. We've also added some probiotic (a real buzz word for all you yogurt eaters!) to the feed once in a while to promote good 'bacterial flora' in thier systems. 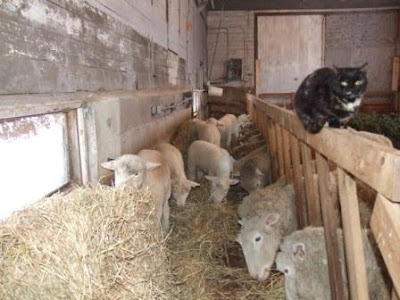 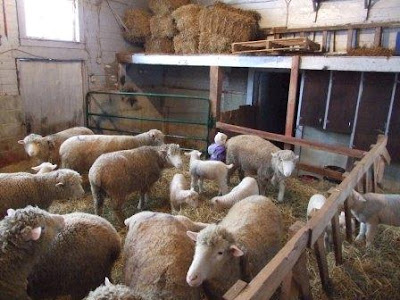 The racket while waiting for their grain. Can you spot the pseudo-sheep?
I'm spending this week at a course to learn how to become an organic inspector (the third party person who goes to farms to verify the certification process), and while it is very long days for this 9 month preggeroo, it's interesting and nice to stretch my brain muscles. I'm due on Saturday, but have this course until Sunday, after which I think I will take some time to unwind and play with Lucy (given the opportunity by Baby Bernard #2). So don't rush to conclusions if I don't write for a while! I will announce any new and exciting additions to the brood as soon as I can.
I've also got some updating about what we're actually doing on the farm (the whole point of this blog!) at some point (grain cleaning, new chicks, etc.), so keep eyes peeled for that as well. Enjoy spring, in whatever form it arrives! 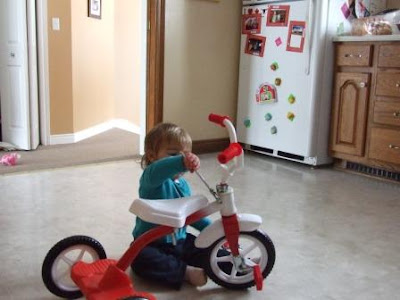 Lucy is hopeful for finer weather, tuning up her new trike.