It all started with the smell.

I'm too tired now to give the gory details, but I'll leave you with this;

At 2:30 on Friday night my nose alerted me, which caused me to alert Mark, which found us shortly thereafter spending a few hours devising and organizing ways to get extra water from our basement shower, from our septic AWAY from our house and AWAY from the basement shower. This involved some ditching with one of our tractors (open cab of course on one of the windiest, wettest and coldest nights yet), running various hoses from two sump pumps and spending some time staring down a dark stinky hole with a flashlight hoping what we were seeing was water receding, not increasing...

Fortunately, the septic situation was short lived and easily taken care of. However, the clear water coming in around the floor in the bathroom (not the shower), soon led to inches of water throughout the subfloor of our entire basement. Thankfully whoever built this place, put all the closets, the bedroom and the bathroom about two inches lower than the main living area downstairs, so as long as we maintained a certain level of vigilance, we were able to keep the wet somewhat contained.

Basically it seems that all the snow that has been hanging around our house all winter suddenly decided that with all the rain and warm temperatures, it was time to come inside. Evidently our foundation is not exactly the seamless, water-tight example we might have hoped and before we knew it, we had water coming in all the closets and rooms at a rate we calculated according to how fast we could suck it out with a shop-vac. At one point, when Mark and I were teaming up with me doing all the vacuum work and him on dump patrol, he was dumping the vacuum buckets every 1.5 minutes. Those are 10 gallon shop-vacs if you care to do the math on how quickly the water was coming in. In one corner of the bathroom, it was rolling in, like a little stream, with rapids and everything. Really encouraging when you're man-handling two industrial vacuums without making a dent. (Not really.)

ANYway, tonite, Sunday, the rate has slowed considerably and Mark and I are feeling revived after a day of help from his great parents in which we both got to have some solid naps and are ready to tackle the challenge again. While we were staring down the septic hole Friday night, dripping and freezing, we were also laughing at the circumstance and I for one, was glad to have married a guy who doesn't mind getting his hands a whole new level of dirty, can find the humour in needing one tractor to pull another tractor out of four feet of slush in our front yard at 4am and keeps his cool under pressure. Last night when I was at my most exhausted, having stupidly worked myself to a state of nausea, I thought of the shiniest silver lining in it all; which is that if this had to happen, at least it happened now and not a week or two from now when I would be a new mom again, with a little baby to try to figure out on top of everything else. So there are blessings to be found in every curse.

I'm secretly blaming this blog, as I recall only a couple entries ago I referenced finally getting some good nights' sleep, with lambing being done. These last two nights have made the lambing sleep look like a coma, so no more pre-mature rejoicing for me on this thing.

The following pictures are from a dam just down the road from us (Scales' Pond) which blew wide open early this morning. The first shot is of a walk way we have used to go see the actual dam (which is just beyond where this picture is taken). It was all grassed and looked like what you can see on the far side. Mark and I have gone geocaching at the dam, and crossed this walkway so it was something else to see it like this. The second picture is just downstream from the first, showing the damage done to the trees that got trampled in the waters wake. When we drove by later today the whole area is just covered in mud and branches. 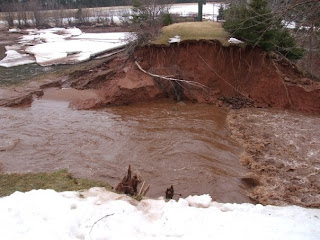 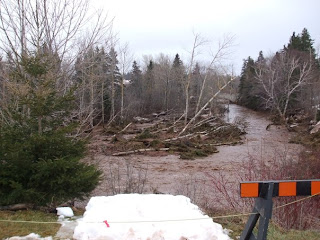 Hope everyone reading this has dry feet and it stays that way!!!
Posted by Sally at 9:14 PM