One Way to Meet The Neighbours...

Since I moved here to Freetown, I've been thinking about ways to meet the neighbours, since I find that compared to West Branch and Rexton, people here are far less nosy and interested in everyone else than I like/am used to. I'm not sure if it's a Bernard family thing, or a general Freetown thing, but overall, I'm really quite dissapointed at how few of my neighbours I know, in the nearly three years I've been here. Since that is primarily my own fault, for the past two years I've done some canvassing for the Cancer Society in April and thus, gotten to know the neighbours on our road, or most of them at least, but that's probably about the extent of my efforts. I mean I want to get to know everyone, not develope a reputation for the village gossip/noser. But, this past Friday night I discovered an entirely new way to meet the neighbours. 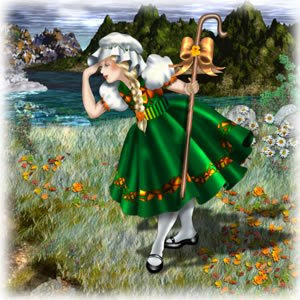 At about 10:30, Mark was visiting with a buddy of his up the road and I was watching TV when the phone rang.
"Hello?"
"Hi, Sally? Have you lost a lamb?"
"Er.....I don't.....think....so....???"
"Well, um, this is Francis Heffel, down here on the Drummond Road, and we were just driving home from Summerside and came upon this little white thing on the road, in the intersection down at the bottom of your road, and figured it must be yours."
The conversation continued with me in a state of shock, asking dumb questions like, "uhh...what's it's number?" and "is it all white?"
Thankfully, Chris, the husband, keeps sheep and threw the lamb in with his while they called me. Apparently it was starving and tried to drink from some other ewe, but she wouldn't have anything to do with it, but at least it was with other sheep.

Finally I sputtered out that I would be down shortly to pick it up and got directions to thier place. Then I called Mark to ask if he could come home while I went to pick up a lamb that the Heffel's had picked up on the road. I was in a rush, so gave few details and he was thoroughly confused, jokingly telling his buddies that 'Sally's is making up stories just so I'll come home.'

Anyway, found their house, found the lamb quiet and contented in the arms of thier teenage daughter and brought it back to the barn where it blatted for its mother until it ate its fill.

The mystery of how the three-week old lamb escaped and ended up a mile from the barn, eluding traffic and coyotes, remains (with no shortage of adamant theories from anyone and everyone who hears the tale). Personally I suspect the dog played some role in teasing and chasing the lamb far enough away from the barn that it became disoriented and lost the scent and sound of the barn, only to end up on the road at 10:30pm. Anyway, the details remain a mystery and a good story, and now after chores are complete we always make sure we count 18 little lambs bouncing around the barn before we shut the doors for the night.
That's one more set of neighbours that I now know however, having been in thier kitchen at 11 pm to pick up one of my 'lost sheep', and discuss the strangeness of life. If only Little Bo Peep had such good neighbours she wouldn't have had to wait for her sheep to come home wagging thier tails behind them, someone would have called her instead.
Posted by Sally at 8:46 AM