Sumptin to think about... 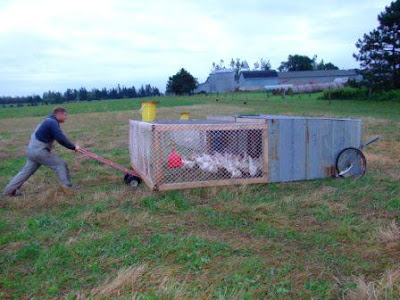 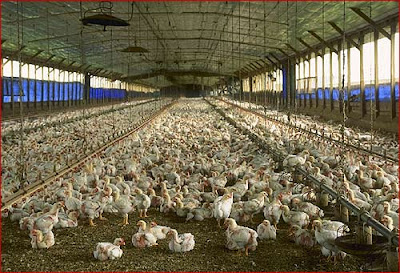 If there is an 'access to outdoors' and sufficient square footage these could be organic chickens from anywhere. Do we care?
At the recent Certified Organic Producers Coop (COPC- of which Mark is president) annual general meeting, one of the members who represents the co-op on the Organic Federation of Canada (OFC) gave a brief overview of some of the work they've been doing. Something he mentioned really caught my attention and I have been considering it ever since.
While the fundamentals of organic production would suggest that we should be producing food for the local market first and foremost, that is certainly not a necessity and in many cases, there is a more lucrative market elsewhere in the world. One farmer here in the Island has been dealing with a distributor in Japan for years now and has a very good relationship there and has actually opened up new markets for many other organic farmers in the region producing fruit and berries specifically for the Japanese market. He claims that he would not take away from potential Canadian markets and always looks there first, but we all know that one must go where the money is, no matter where that might be.
SO, if there are Canadian farms who would like to provide product for a specific, international market, should they be required to meet more than the standards for that country. For example, if I found a great market for organic lamb in...Spain or Afghanistan or wherever, do I need to meet the Canadian organic standards, or the Spanish or Afghani standards? I will have to meet the Spanish or Afghani standards for sure, so do I need to ensure I pass Canadian standards as well.
My initial reaction is yes, I should be required to meet the standards for both the country I'm producing for as well as the country in which I'm producing, but after some thought...why? Without the Canadian certification I wouldn't be able to sell the product here, organically anyway, so I'm taking that risk. And, as long as it meets Spanish standards, no matter how different from here, the customer in Spain will only expect the Spanish standard.
Or is that true? Most of the organic product available in our typical grocery stores is from the US and do we all just assume that they have the same standards as here? Or do we care? If it came from China but still said certified organic would we be any less leary of it?
Is it ridiculous to imagine world-wide standards? With such a difference in climates, livestock, crops, infrastructure it's pretty unreasonable at this point, but how else can we have true food security unless we grow it ourselves? I guess it all comes back to consumer education, but it's an interesting topic. To me, at least.
Posted by Sally at 4:34 PM