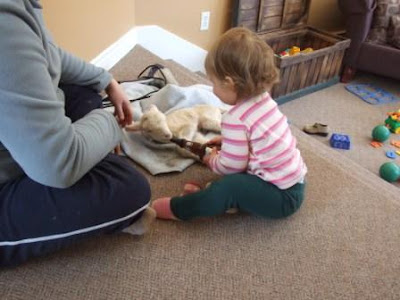 My little shepherdess in training
So I was right, the last lambs arrived on the first day of spring, so life can resume its course here at Barnyard Organics, whatever that may be. The last ewe had a big beautiful ewe lamb (backwards again) mid morning on Friday and went about the usual cleaning, caring, etc. Mark checked her at lunch and she was still doing the mother thing, no sign of another one on the way, so I chalked it up to a big single and was content to be done.
A few hours later I went out to see them and here was a pathetic little wet lamb at her feet, while the first one had escaped the pen and was wandering around the next pen. The mother was so distressed at not having the first one with her that I guess she neglected the second one and hadn't even licked it off. Plus, the long length of time between the first and second indicates maybe some difficulties in the labour? I don't know, either way, here was this sad little thing shivering away in hay.
Long story short, after a couple trips to the house, and a couple ups and downs, Larry the lamb just didn't have the energy to make it. Lucy certainly enjoyed the novelty of having a sheep in the house though and was as 'helpful' as could be, loving showing the 'baby' off to anyone who stopped by to visit.
All in all, this was another really successful lambing season and I have been really blessed in the lack of difficulties and/or challenges I've had to deal with these first two years. 150% lambing rate is down from last year's 200%, but I'm not complaining as I had 6 first time mothers this year who all did very well. From 12 ewes I have 18 big healthy lambs, the older of who are beginning to eat their creep feed pretty consistently and spend just as much time eating out of the feed alley as anywhere else.
So, onto the next season of the farm, which is the preparation for seeding season. Mark and I are both looking at seed catalogues right now, albeit his are a bit more important than my few garden seeds I'll order. Also figuring out our plan for chickens this year. We want to raise 300, which is 100 more than last year and Mark thinks we should do them in three separate batches, but I'm concerned about the early summer weather and late summer/fall weather which could potentially affect the first and last batch. So, we're still under discussion and agree that we have alterations to make to our existing infrastructure, but have to make those decisions soon. For now, I enjoy nights of uninhibited sleep (uninhibited by lambing worries at least)... 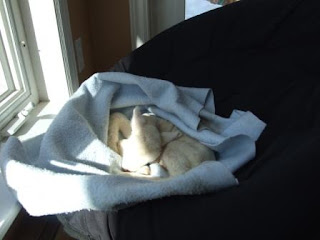 sleeping in the sun
Posted by Sally at 9:37 PM