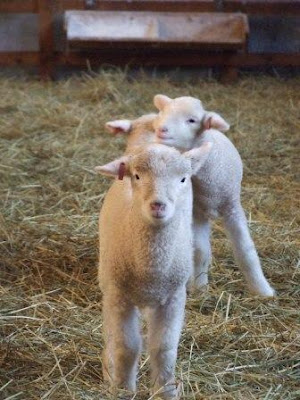 The first day of spring is on Friday and I'm hoping by then I can say that my lambing season is over. After today, there's only one left to go and I think today perhaps put her in the mood. :)

Today was kind of exciting in that it was Barnyard Organics' first ever assisted lambing. When I say exciting I mean a bit stressful, but evidently successful, so...exciting. It has been almost two weeks since our last lambs, so we had gotten a little bored of all the checking and wondering about these last two ewes, but today when Mark got back from a four wheeler drive with Lucy to say there was a sheep in labour we fell back into routine.
I got geared up in my increasingly smelly sheep barn clothes and headed over to find a beautiful big ewe lamb and content mother calmly licking off her new charge. While I prepped her lambing pen another water bag emerged so I decided I might as well wait for the twin to arrive since it's usually pretty soon after the first.
Not so. 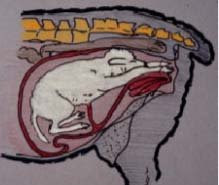 backwards (not that abnormal, but not my usual normal)
For the next hour I kept contemplating heading back home and just letting the ewe have at it, but as time wore on, I started wondering why things weren't progressing. I was looking at two feet, which is usually a good sign, but suddenly realized I was looking at the bottoms of the feet, instead of the tops, and no nose coming along with the feet.

So after a call to Mark to check the good old sheep book on lambing positions he came over to the barn, put on his best veterinarian face and pulled out a little lamb while I held the ewe. Another big lamb, who after a wheeze, a blat and a lick-off was up and having a drink.

I'm sure to old shepherds this sort of thing is not a big deal, but had anyone else been in the barn with us after we stepped back to watch the ewe lick off this little wet creature, they would have seen two of the proudest farmers to ever hit Freetown.

So all is well as I sign off tonight with the hopes of finishing up this season very soon. It was finally warm enough to open the big front doors of the barn today to let in a big pile of sunshine, but of course the ewe decided to labour shortly after and we didn't want the new lambs getting cold, so it's shut back up for now. Looking forward to being able to open the doors full time very soon.

A very happy shepherd,
Sally
Posted by Sally at 8:18 PM