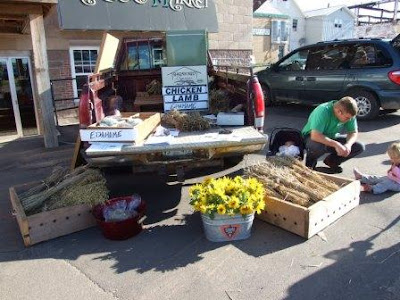 Our display off the back of the truck, beside the entrance, when Mark and Co. showed up for a few minutes. From this picture it looks a bit 'shiftless' to me with the papers and things, but at the time I thought it was fantastic. (See blackboard photo below for full effect)
So the first show at the market for Barnyard Organics was ...bittersweet, I guess. Everyone says, and I got the impression that the first week is not a fair representation of what it gets to be like after some time, but since this isn't something we're interested in doing for the long haul it was only fair in terms of business.

As I mentioned in the last post, I was really hoping to get some names for lamb orders, which I did, and we got some orders for Thanksgiving chickens, but I have to be honest and say that we only sold one chicken yesterday. I'm actually embarrassed to put that on here, but this is supposed to be an honest account of our farm (although if that were true, there'd be a lot more arguing and 'discussion' included! hahaha). A couple of people asked for one, but then said they were too big and left. A couple other people only wanted fresh ones (which sort of annoys me, since most of the time they're probably only going to take them home and put them in thier freezer). And then for lamb, there was lots of interest, but most people only wanted a piece of leg, or a chop, or some ground lamb. I kept telling them that a side is only about 20 lbs of meat, but no one has freezer space anymore. I don't understand it! We've only got a medium sized freezer, but it's got a side of pork, a quarter of beef, a little lamb, and some chickens in there. Then all my frozen peppers, berries, pumpkin, etc. off to the side. What are people putting in thier freezers? Fudgesicles and chicken nuggets?! (Don't let me fool you into thinking I'm too good for fudgesicles and chicken nuggets, I've got those too, but....you know what I mean!) 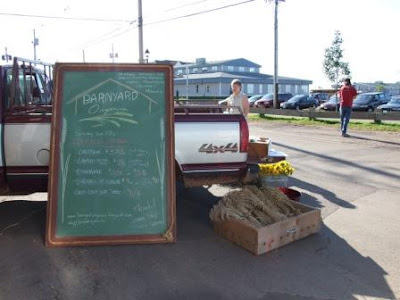 The chalkbaord with our list of goods and logo (I'm so impressed with myself for the replica. haha!)
Anyway, so it was a little frustrating on the meat front, but encouraging on the edamame front. It sold out well. Because Tomoko doesn't have her booth at the market anymore, and she used to serve edamame with her sushi, lots of people knew what it was and wanted a fix. So we were able to fill that void. Then others were just curious and I was glad that I had made up a sheet called "What the heck is edamame and what do I do with it!?" which included cooking instructions, some basic info and nutritional information. We charged $3 for a half pound bag, which is a good sized serving and a few people took it home just to 'try it'. I feel pretty confident that anyone who tries it will want to try it again, so we'll have lots more available if we go again next week and I'll probably try to have samples available next time.

That is currently up for discussion because while we definately we made money, I don't think we made enough to cover my time and/or child care. Mark and his mom kept the kids, but it's a long, busy stretch with two kids from 7:30 to 1:30, so not to be ignored in the calculation of worth-while-ness. 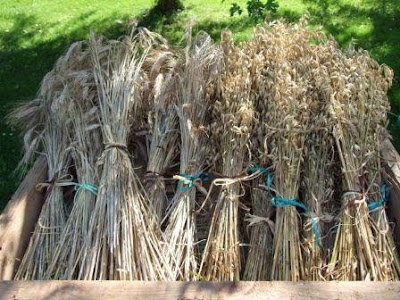 One of the boxes, with oats and triticale. The other box had wheat and spelt. Not that anyone cared.
Maybe I'm just sour because we hardly sold any of my fancy wheat sheaves at all. I chopped the price in half (to $2 each or 3 for $5) about an hour after I got there, and even then only sold a couple. Lots of people walked by and thought they were 'cute', but only a couple people really picked them up or seriously considered them. Ya know how when you go to one of those Christmas craft sales and there's that one decoration that EVERYONE HAS GOT TO HAVE, because the right person is carrying it around? I think that's kind of the way with these things... I wonder if the well established flower-woman at the Charlottetown market had them, if they would sell? Or what they sell for in Halifax? Was everyone who looked at them too much like me and thought, "That's crazy! Those are cute, but I could THAT!" The thing is, we could all do it, but no one DOES! That's why we buy things... Anyway, that was my first lesson in expectations and being shot down. Since they're still perfectly fine, I can always take them back if we go again, and I was thinking that maybe corn stalks would sell too, but do I really want to waste my time if people are just going to smile at them?

It wasn't a completely negative experience however. All the vendors are really great. Gerry, the manager is fantastic! I felt the sense of community that I had hoped for. I met a lot of people who read this blog, which is always amazing to me, since it started out as a little 'newsletter' of sorts for family and friends and now seems to have taken on a bit of a following- if I could only translate that into $$! hahaha.) It was a BEAUTIFUL day and I had an outdoor booth (just plugged the freezer in outside-perfect!). I had a great spot, right by the door, totally unavoidable. I got to chat to people I rarely see. It was a morning without the kids! hahaha! I was also next to the market 'buskers'. There was the usual fiddler, then a piper came along who played the bodhran for a while and then a sweet little girl who did some tap/highland? dancing who were right beside me, and with the sun and breeze it couldn't have been a nicer day. 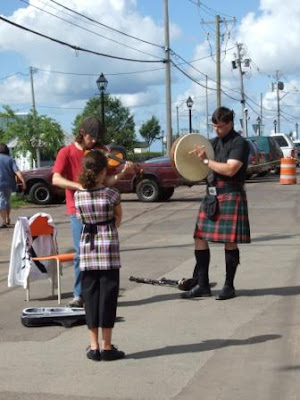 SO, we've got fresh chickens come Friday afternoon, and I'm shipping two lambs this week, which might be ready for Friday as well, so we could potentially hit up the market again next Saturday with lots of 'FRESH' meat. This a busy week though; with Mark likely combining everyday, our anniversary on Wednesday(which will amount to very little I'm sure with it being such good harvesting weather), I'm getting two wisdom teeth pulled on Thursday and friends coming to visit on Friday night, and chickens and lambs off to thier respective abbatoirs, so we'll have to see how things go.

I think I may have made this out to sound like a pretty bad experience overall, which it really wasn't. We sold all the edamame, some of the oat cover crop seed (which was kind of a last minute, thrown together, zero effort idea), all the sunflowers (which I actually took just as display, but that's all anyone wanted so I sold them for a $1/handfull) and made some good contacts for lamb. Probably for a first showing, that's pretty decent. If we were planning on being there long-term I might be more heartened, but when it's something we were hoping to only have to do when we need to sell chickens, it wasn't an overwhelming success by any means. Yet, I have a feeling I'll be back in just 6 days from now, trying it again. That will truly tell the tale of the future for Barnyard Organics at the Market.

Hope all is well on this chilly September night in your corner of the world. This weather lately has been heavenly. Warm days and cold nights are my dreams come true.

ps. It was really nice to meet some of you readers! Thanks for the support!
Posted by Sally at 9:12 PM