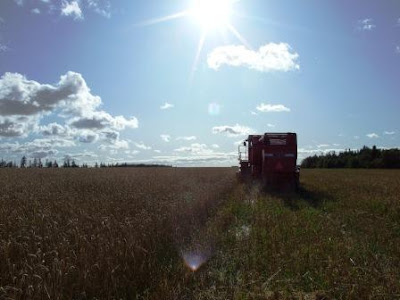 Well, the market goers didn't lie; they really did want fresh chickens over frozen. I'm still convinced that many of them took the birds home and promptly plunked them in the freezer, but that's just me being cynical (and probably shooting myself in the foot as well since many of them probably read this!) Anyway, our sales were up about 500% from the week before which is pretty fantastic. I also did what I swore I'd never do and took some fresh lamb cuts to see how they would sell. For the first time and for not really knowing how people would want the cuts I'd say it went pretty well. I should have gotten the racks cut up into chops instead of leaving them whole because they're nearly a four pound product left whole and that's generally far too much for most people especially when the comment I heard the most was, "Oh, that's way too big, since I'm the only one who eats at our house." Seems like there's a lot of homes with a single lamb-eater. Too bad. Although I can't say it's any different at this house. hahaha.

Anyway, overall, a much bigger success. I really enjoyed my market experience. It was nice to be busy, be outside in the sun, talking with people, meeting customers, selling things I believed in. I always say there are other things I'd rather do with my Saturday mornings, but in retrospect after having done it for a couple weeks, if it wasn't such a hassle for Mark to keep the kids I'd seriously consider doing it more often, on a more regular basis. That would mean we'd have to have fresh chicken and lamb on a more regular basis as well however, which isn't as easy as it sounds. Oh well. We've got to figure something out for Thanksgiving weekend however, since we've taken orders for fresh chickens that weekend and also have a wedding in somewhereville NS (Sherbrooke) which we need to get to that Saturday afternoon. (Just looked it up on MapQuest and it tells me that we're a 4 hour and 3 minute drive- not including the kid-drop off at my parent's place... oh my....). Perhaps we'll do a chicken drop-off that Friday evening. It's unfortunate to have to miss out on all those Thanksgiving customers that Saturday though! We'll have a freezer full of PERFECT, fresh chickens ready for the oven and no one to sell them. Hmmm..any suggestions out there? Anyone want to sell birds for us? We'll give you one in return!? Bahahaha! 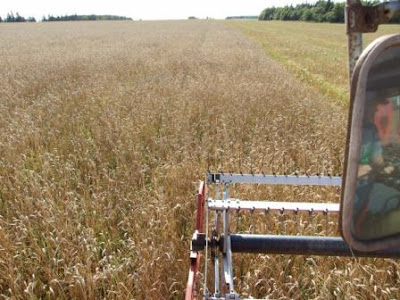 Moving on! We had a lovely anniversary. The pictures for this post were taken on the day, Sept. 9th and what a day it was (I highly recommend September weddings- the weather is heavenly). You can see the reflection of the mirror in the combine shot that Mark has a beer in hand. This is not a frequent occurance, just a brief celebration with me in the midst of harvesting wheat. He's finished the grains now and is just waiting for the soybeans to be ready (likely late October at this point). That is not to say that 'just waiting' means I see him any more than when he was combining. (Ahem.) He's been seeding out oats as a winter cover crop and moving the grains among the bins that we've got available, dealing with some roasting orders and working out contracts. Bizzy bizzy bizzy.

My double tooth extraction went swimmingly despite the fact that when I sat down, the dentist mumbles to me in a thick french accent that he's only 68, too young to have 'da cataract'. Um? Sorry? Oh, no big deal, he had one operated on last year and is going for 'de udder one dis fall'. Oh, well then, what a relief!? He grabbed the right teeth, so that's all that matters I guess... 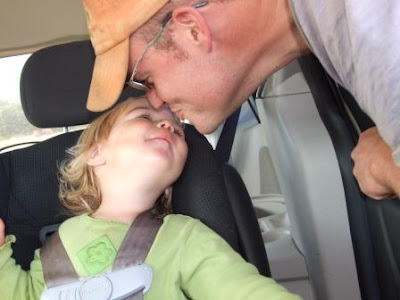 Mark and Lucy stretching for a quick kiss during a visit to the field in the middle of harvest.
The kids are well and although the weather has cooled down considerably, life is still running pretty smoothly here. My peppers and tomatoes are having a hard time ripening, but I managed to make one batch of salsa yesterday. We're yet to try it, but it looks good in the bottles so fingers crossed. Am about to tackle pickling hot peppers for the first time as soon as I finish this post.
As a side project this year, I've taken on the role of music director for the Sunday School at our church (Summerside Presbyterian) which begins this Sunday. I'm really looking forward to it as the Sunday School hasn't really had a music component before and I still remember really loving that part of Sunday School when I went as a little kid. So I've been practising and remembering all the old favorites this week, along with Lucy's help. There's one that goes, "Hallelu-hallelu-hallelu-hallelujah! Praise ye the Lord!" and I usually do the 'Hallelu' parts and Lucy does the 'Praise Ye the Lord' part except she says, "CRAZY Lord!" instead. Pretty cute stuff if I do say so myself.