...and a mint for your pillow madam.

It's December 21 and the Barnyard Organics sheep are in their new palace. And what a palace it is!!!
Here's what it looked like, first thing this morning; 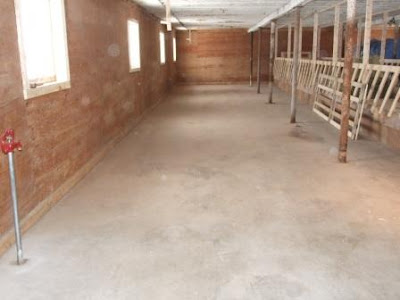 Then, with a layer of sawdust from Mark's friend, Jason Gaudet, who runs a business, cutting firewood just down the road. 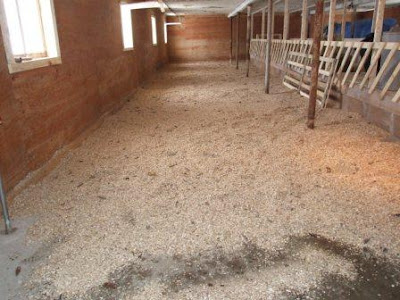 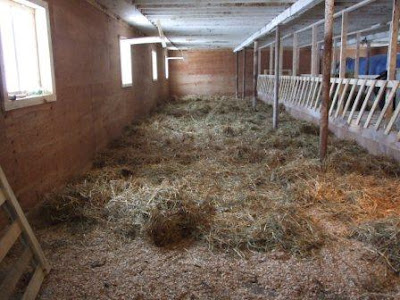 And TA DA! Tonite, as the sheep ate their supper! 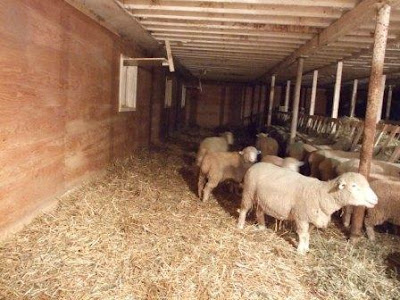 I wish I could say that moving them from one barn to the next was as easy as posting these pictures, but, not surprisingly, that is not the case. They just didn't like the door we wanted them to use, but after much chasing, tussling, fighting, coaxing and cursing, we managed to drag them all where they needed to go.
Check out my proud carpenters/farmers. Even Wilson, who normally hates the sheep, sheep barn and all things sheep related, didn't scream his face off while we fed them tonight. That has got to be a sign! 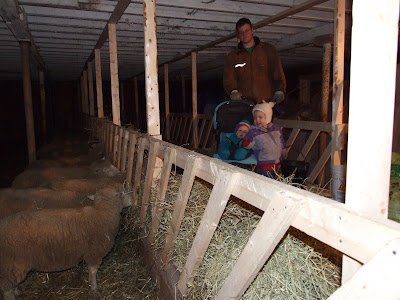 *My favorite part of the day (and 'real farmers' will roll their eyes at me here) was when we were bedding out the straw. We had a bad infestation of field mint in our oat crop last year and thus, the straw made from the oats was FULL of mint. As we were fluffing it around, the barn filled up with the scent of mint and I felt for a minute like I worked on housekeeping for the Waldorf, or the Royal York or somewhere that actually still leaves fancy mints on fancy pillows. Only organic sheep get THAT kind of treatment!

Anyway, so that is the big excitement around here lately. The barn is pretty much complete. Just a few little extras to tidy up sometime in the future, but for now, it is so much more than I expected and exactly what I wanted! I can house like 80 ewes in there if I want!!! Time to get on the lamb marketing train! Wooot woot! 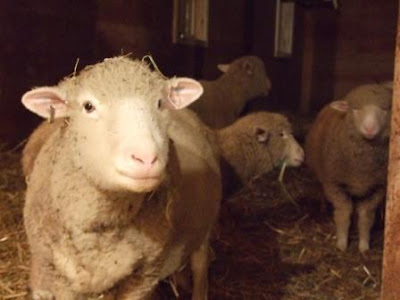 I took this last shot as I was leaving the barn tonight and I'm pretty sure that ewe is smiling at me. Like a little, subtle sheep thanks. hahaha!
On a side note, we finally cut our Christmas tree today (the top 8 feet of a 50 foot wonder, and it's PERFECT!), which would have been fine had Mark not decided that the best method to get it home was to tow it behind the four wheeler. If it was 50lbs when we cut it, then it was 300 by the time we got it home. It was completely coated in slush and wet when we landed back in the yard. So it spent most of the day outside, standing up against the house, dripping off, but I'd like to get it up before New Years, so it's laying out in the basement by the cast iron rad doing it's best impression of a tree that might possibly dry off within the next 48 hours. I've got a spot cleared in the living room and a little girl who has been promised a "Chreesmeees tree", so even if I have to use towels as a tree skirt, it's going up!!! (I should mention here, that no matter how wet this tree is, it is a step up from the one last year that we had to pressure wash after it got wrapped up in the tire of the four wheeler when we got stuck in the mud...)

If I don't write again before Christmas, have a good one, enjoy the spirit of the season and take some time to relax and take it all in.
Hope things in your corner of the world are merry and bright!