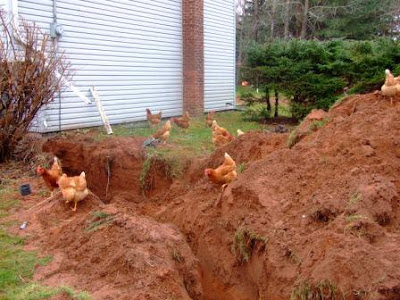 Since this is technically a 'farm blog', I'll start by posting a picture of some chickens, but for the most part, the first half of this entry is once again mostly for the benefit of my family in WB, NB, who are keeping up with our water trials in the basement each spring and our ensuing attempts to fix the problem. This week we tackled it once and for all and dug a few holes. 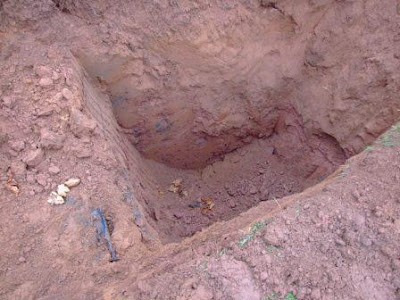 This is the first one, about 15-20 ft deep. It started out as a trial hole to find the old dry well, and Mark and the backhoe driver thought they were lucky enough to have hit it first try. We sent the backhoe guy away while we had the plan to simply re-fill the hole with new rock and be done with it. After chatting with Wendell that day, he told us that actually what we had found was the pipe that used to be his old septic tile field, from way back when he and Carol had their trailer down on this lot.
Hmph.
So, back comes the backhoe. 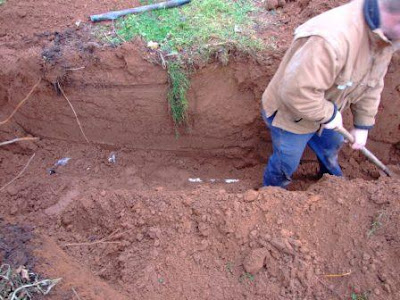 This time, we started at the corner the house and traced the pipe out to the actual dry well. It was about the same distance as the original guess, just a slightly different angle (towards my garden..which was once again decimated in the process). The picture above shows Mark tracking the pipe as the backhoe did the heavy digging. Once we finally reached the end, there was much more evidence of what we expected an old dry well to look like. The pipe job was pretty shabby and for a while I was sure that I was on an unsexy episode of Holmes on Homes. Mark sounded just like him, ripping apart the previous job, proving all the ways he was going to do a much better job, etc. I thoroughly enjoyed every minute.
Anyway, the final decision was to fill that trench back in and dig a new one, out to the first hole we had dug. So that's what we did.
When we had first dug at the corner of the house we also found an extra pipe. A narrower, simple, black pipe that had been connected to the weeping tile at the corner. While the general consensus from the peanut gallery was just to reconnect it and not worry about where it was coming from, Mark wasn't going to let it go. So he dug it up and traced it back to our washing machine. Apparently, it was common to pipe the water from the washing machine to somewhere other than the septic because it was believed that the soap from the machine could kill the bacteria in the septic that is needed to break down...things. SO, this time, there are two pipes running to the dry well. One for the weeping tile and one for the washer. 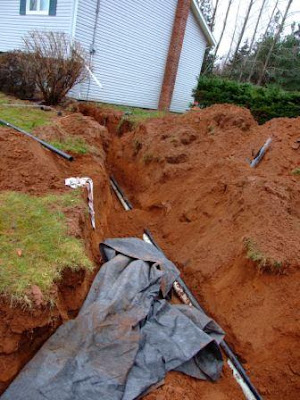 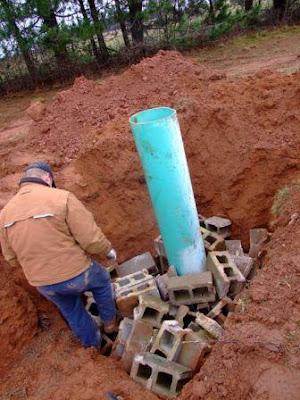 Thankfully we live on a farm and tend to have lots of...excess...stuff/garbage around that urban dwellers don't have the luxury of keeping around, so we were able to fill that first giant hole with old cinder blocks. (If you are from the Dept. of Environment, and this in some way violates some kind of PEI law, disregard that photo and commentary please. Thank you.) We also put that big green pipe down into the well too, so that if need be, we can at least look in and see how much water is in there, or pump it out...or something. It might prove to be completely useless, but it feels better to be able to access the dry well, for some reason. 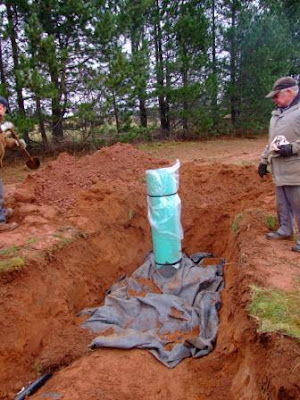 So here's the final product before it was filled in. Take that snow and rain! Not only do I have a big muddy ditch that runs around half the house, and a big muddy lawn, I now have a big green pipe sticking three feet above the ground in the front yard which Lucy keeps affectionately insisting is a "gaubige can!!!" Don't misunderstand however, I am in no way complaining! If I have dry feet come April, I don't care if I never have grass again. So here's hoping!

In other news, and believe it or not, there is other news, the sheep barn is coming along! As you can see, the woman door got put in this week and as you may also be able to see, has a very complicated security system in place. Baler twine! (I am slowly bringing my Wilson/West Branch/Hillbilly ways into the Bernard mentality!!!!!) 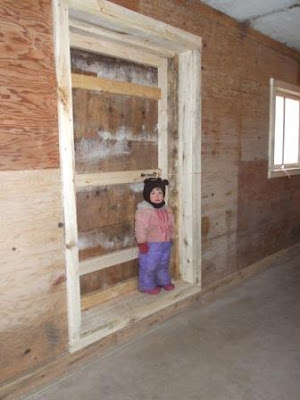 As Mark was cutting out the door (with a chainsaw..haha) he found a board that had been signed by Doug Profitt, Wendell's business partner quite a few years ago. The date is July 12, 1987, which would have been when they remodeled this barn the first time, to switch it from dairy to potatoes. 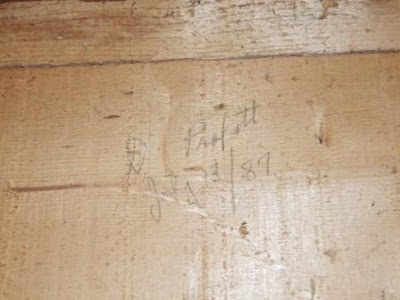 The next two shots show the progress from the outside, and Mark's meticulous insistence that it look good, not just do the job. I think he succeeded. 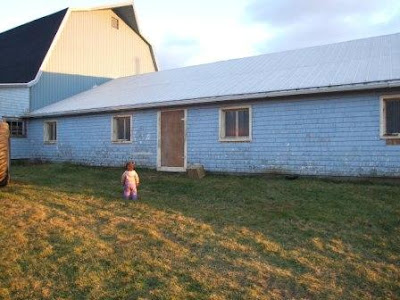 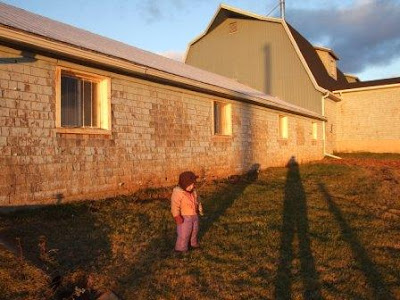 The hay in the back sheep barn is starting to get low, so hopefully we'll be able to move soon! (I'll let you know what kind of comment that generates once Mark reads this.)

Hope this finds you well!