Life has been interesting around the farm lately.  Nothing too spectacular, but the weather this time of year tends to lend itself to general busyness and a feeling of anticipation.  Mark and Wendell have been busy hauling, spreading and disc-ing in the manure/mussel shell mix.  Apparently it's going on pretty nicely and they've got quite a bit of ground covered so far.  Mark is hauling more from the plant every week, but they have caught up with the pile, so the smell factor is pretty much down to nothing.  (For us anyway. Apparently a few neighbors are on the wrong side of the wind....errrr...sorry?)

I've been busy too, with spring fever setting in.  It all started when we moved into this house 3 years ago now.  Someone in the community saw Mark in town and was telling him how nice the landscaping is (and it WAS when we bought it!) and how he always admired the 'nicest lawn in Freetown'.  Talk about pressure.  Anyway, with little kids, little extra money and a farm to get up and running, the landscaping pretty quickly fell to the bottom of list of priorities.  And the following two pictures show what happens when you leave previously intensely managed beds to themselves. 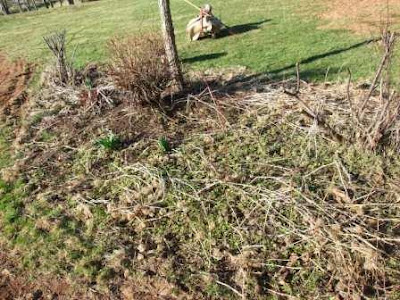 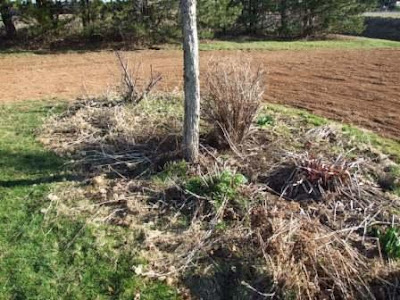 This bed is in the front lawn, near the road and is exceptionally easy to ignore, except that it looks like no one even lives here (let alone two people with diplomas in agriculture and plants!) So I decided that this was the year.  I was going to fix this thing.  It's been taken over by something Mark's mom calls "devil weed", which spreads by rhizomes and is virtually impossible to get rid of.  I used a pile of old burlap potato bags that are here from the previous years of potato growing and covered every square inch of ground except where perennials exist.  Then I spent some hard-earned cash on some heavy mulch and covered all the burlap.  Below is the result, of which I am very proud!  I'll show you how it looks in September and we'll see how my genius my ingenious really is. 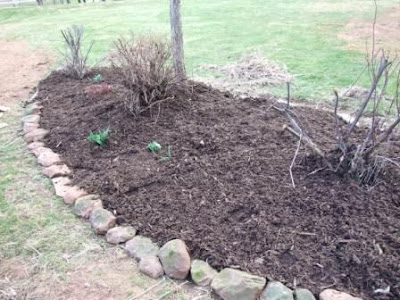 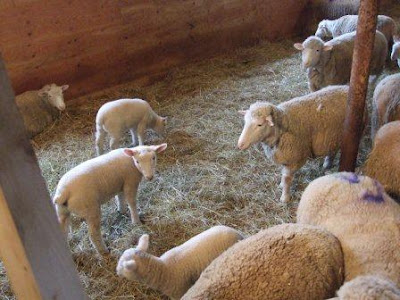 Life in the sheep barn is interesting as well.  My first lambs are doing extremely well and are weighing in at around 55 lbs. so I couldn't be happier with their progress.  I specified 'first' in that sentence because there have been some wee miracles appearing lately.  There was a ram lamb last fall who kept escaping his fence and finding his way into the ewes' pen.  Apparently he was a virile little creature and managed to breed at least three sheep.  I say 'at least' because they have been showing up every few days and with each one I insist that that MUST be all, but have been fooled every time, so won't be caught again.  Anyway, they are tiny, but all doing well.  I feel badly because I have been keeping everyone off grain who didn't lamb with the first batch, but they seem to be catching up nicely and not inhibited. One of the ewes he bred was a yearling, who I never breed, but even she is doing fine.  When I went in and saw her lamb there was a big ewe claiming it and not letting anyone near, but when I felt that she had NO udder at all, I looked for the real mother and finally decided that this little yearling must be it.  It took her a while to get onto it, but she's taken to motherhood just fine.  But it was a good reminder as to why I don't breed the young ones, as many conventional farmers do. 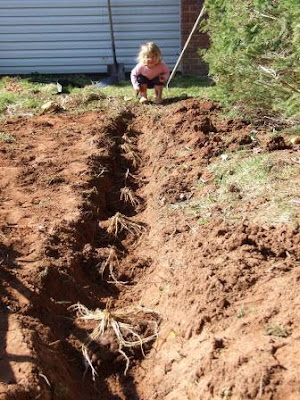 I have been itching to get into my garden, but common sense has held me back. Until this morning.  I went to Vesey's on Saturday and picked up a dozen asparagus roots.  Asparagus is up there in my top 3 favorite vegetables and I wrote about losing my patch in the lawn excavation that went on here last fall, so I've been eager to get some new ones established.   Thankfully this morning was the kind of day where kids don't mind spending the day in the dirt and I managed to get them all in the ground.  You can see the little white octopus roots sitting on their mounds of dirt and manure, ready for covering, assistant looking on with pride, spade/weapon in hand. 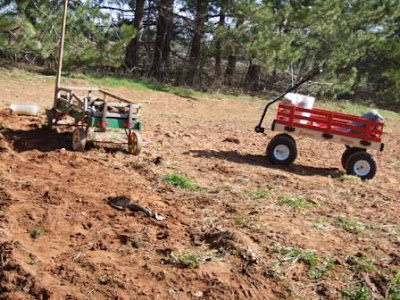 Wilson got a fancy new wagon for his birthday (yes, ONE already tomorrow!) so the old one has become my new wheelbarrow (I didn't have an old one).  It's actually better than a wheelbarrow since it's the right height for my main assistant to reach in and help.  Surprisingly, it's a great size to mix topsoil and manure together and it's easy to truck around, so there are some perks to having these kids! hahaha.
I think my mom and sister have been waiting for some not-so-agriculturally related posts, so I've included some shots of the fam and kids for their benefit. 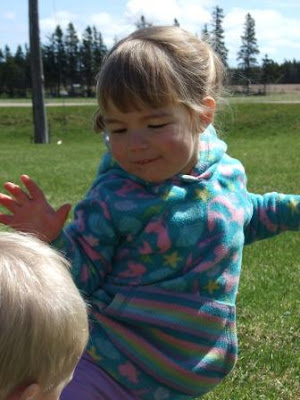 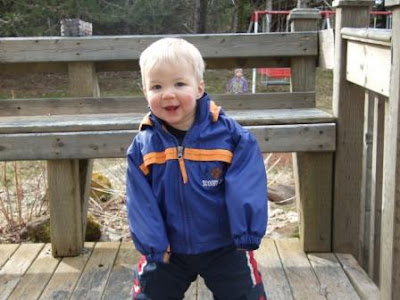 Wilson is walking most of the time now. 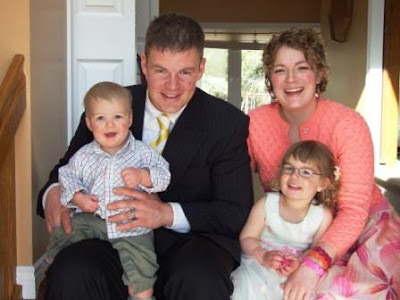 The Barnyards in their Easter best.
Hope this finds you basking in the sun, wherever you are!