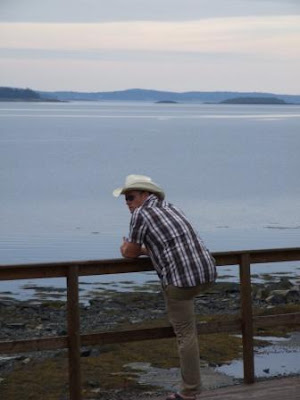 It always surprises me when customers and city dwelling friends show such concern over whether we 'get away' from the farm enough, whether we 'take time for ourselves'.  Maybe it's an inherent part of doing something you love, but most of the time, until they ask, we don't realize that we haven't 'gotten away' for a while.  In any case, like everyone else, summer usually adds up to a pretty crazy schedule of traveling, entertaining and being entertained. You can see my one-legged cowboy taking in the sights of St. Andrews a few weeks ago now, where we went for the wedding of some good friends from Agricultural College. 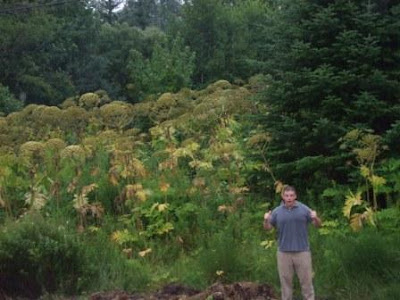 One of the highlights of that trip was seeing what we're sure was giant hogweed.  Neither one of us can understand how it can be considered such a threat, but is not being dealt with.  Apparently there was some recently found on the Island and evidently they are waiting until the spring to do something with it.  Now, neither Mark nor I are plant physiology experts, but with some experience with problem weeds, we are convinced there must be something that can be done this time of year to at least prevent the spread?  Anyway, we were excited to see some in person (as you can see by Mark's face.) 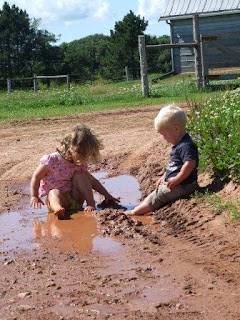 The kids know how to make their own recreation on the farm in the summer as well.  Why go to the beach or the pool when you have a perfectly great pool right in the driveway!?  One with mushy squishy mud and rocks and all sorts of extra fun accessories!?  They had a great time for a while.  Then Lucy took the hillbilly pool to the next level. 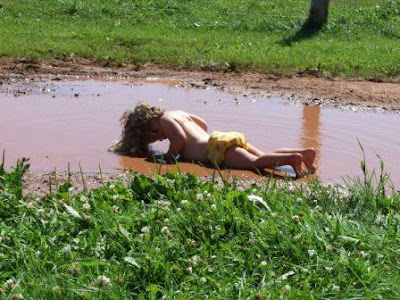 Then once a year, we get to host my immediate family for what has come to be known as "Wilson Weekend" or "Wilson Days", and I look forward to it every year. 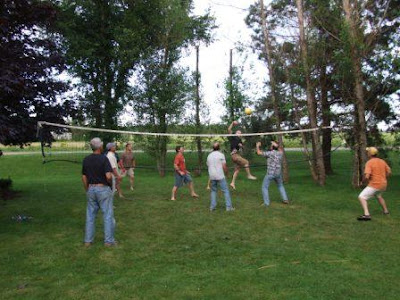 The volleyball games are always exciting (and contentious) but I think that the younger generation may be starting to pose a real challenge for the ....er...veterans... 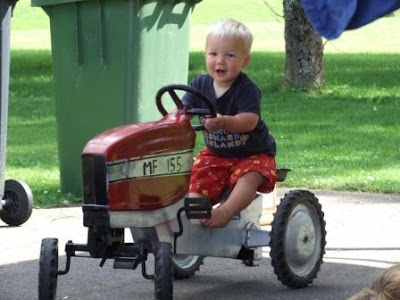 Wilson is lucky enough to have a very industrious and clever cousin Isaac who re-built and custom painted this tractor for him.  It might be another year before he can reach the pedals, but if you try to get on it, Wilson is not long letting you know just who's it is. 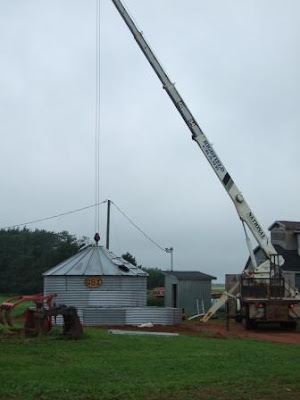 But between all the summertime fun and parties, we have been hard at work.  One of the major projects that has gotten well underway here is the construction of our newest grain tank.  It's a 40 foot wonder that took about five hours of crane time, 6 people and LOTS of nuts and bolts.  It's second hand, and we're missing a few legs, but other than that, it's up and looking good. 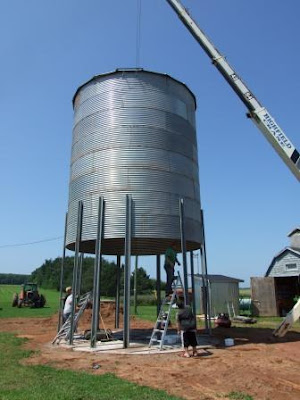 The wind posed some interesting challenges, but kept our mosquitoes away, so there were no complaints from me. 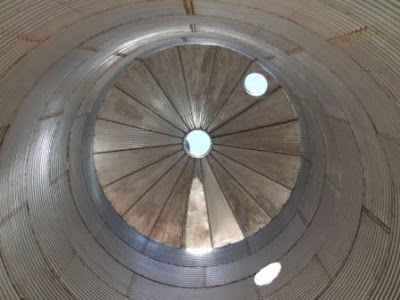 I love this shot from the inside.  A rare look and an interesting perspective.
Hope this finds you reveling in these last days of true summer!
-Sally
ps. If anyone sees a fish in the Northumberland Strait wearing a pair of small purple kids eyeglasses, tell him to swim back to PEI and throw them up on shore.  We're off to use our second pair free for the year.  Beaches and glasses don't mix.
Posted by Sally at 10:08 AM