Getting the Neighbours Talking

There have been moments since we started farming organically that the neighbours have scratched their heads, rolled their eyes and wondered aloud, "Just what the hell are they doing now?"  Living in an area of strong agricultural history, things have been figured out to a science and everyone does things just so.  So when what used to be a perfectly 'normal' potato farm goes organic, who knows what's going to happen.

Like the time we planted fall rye in the spring, using it as a green manure on transitional land, never wanting it to come to head and a neighbouring farmer suggested that, "That grain field needs a good dose of nitrogen I'd say."
Or why we leave such a heavy crop of valuable legumes every year, only to plow down, when it could be going to feed.

This week though, I think if anyone saw Mark out in the field in a combine running through an immature barley field with the header held high, it might have taken the award for 'strangest thing yet on that hippie farm in Freetown, according to the neighbours'. 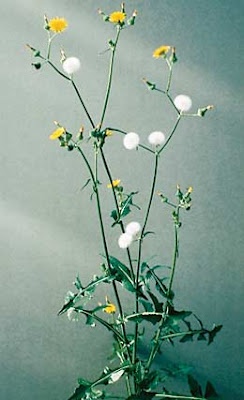 Somewhere along the way, this little pest, the sowthistle, made its way onto our land and my family back in NB can attest to its reluctance to never ever leave.  Being a thistle, the millions of seeds per plant love to flutter away in the breezes and plant themselves even further afield.  About one third of our lovely barley field was completely taken over by this weed and was turning a pretty shade of yellow as more and more flower matured.
We considered mowing that third of the field, sacrificing the barley in favour of getting rid of the flowers/seeds, but thought that first we might try a different method.
It may not have happened if my brother had not been over and bought a big fancy combine that he left sitting so temptingly in our farmyard a few days before.  Ours hasn't been brought out yet and I doubt that it would have made the trip for this little experiment, so I guess we can thank my economic-stimulus brother, Mark W.
Anyway,  Mark B. decided (without much convincing) to run through the crop, sacrificing the tire tracks of barley to run through with the header held high enough to cut the sow thistle but not the barley.  When I look at the piles of sowthistle heads that came out after a thorough cleaning, it HAD to have made a difference.  I guess we'll see next year and the following year, if the sowthistle continues to spread.

So, if you happen to drive by and see the snowblower out in July or the fingerweeder in the field in the snow, don't assume we're crazy, although that may very well be.  We just might onto the next big thing.

Or we might be just trying out a new combine with a good excuse. :)