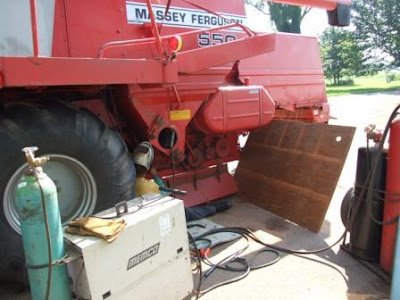 It doesn't really matter how much you tell yourself that repairs are a natural part of the beginning of harvest season, they each seem like an entirely unexpected and extremely inconvenient disaster every time.  We started off with two medium breakdowns, each resulting in two days of beautiful sunshiny missed days of harvest.  Then of course, this week, once all is in perfect working condition, it's calling for overcast, potentially showery days everyday.  Ah, such is life.  I can almost promise however, that Thursday, the ninth of September will be a perfect harvest day, because every year on our anniversary, Mark spends the day in the combine and although he always takes the evening off, we both feel the pull of a nice evening for harvesting. 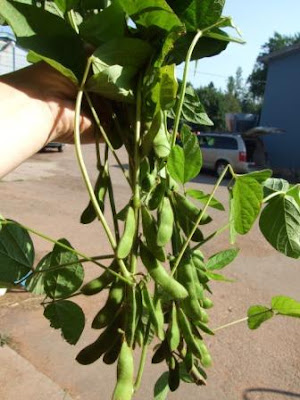 This past Sunday we spent the afternoon down on Victoria Row in Charlottetown for the Nigwek festival: A Celebration for an Organic PEI (or something to that effect).  We had hoped to be able to sell chicken and lamb, but in the end, due to not having access to power or room for the freezer/truck on the street, we went with a sign up list and LOTS of edamame.  Despite an incredibly rough start (we had planned to use our Coleman stove, but high winds and some small mishaps made for a giant bonfire instead, wind took all our papers for a ride, etc.) with some help we got ourselves set up quite nicely and managed to sell out by 4:30.  A lot of people tried it for the first time and were all impressed and surprised by the flavour.  We sold as much raw, for take home as we did cooked for immediate consumption, so that was good too.  In any case, it was a nice way to meet some new customers and make some contacts. 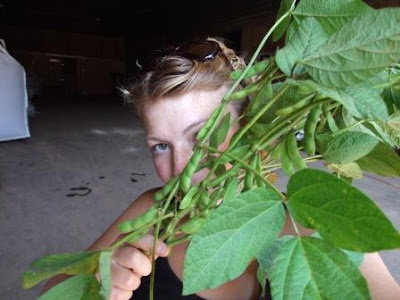 Picking the beans is a little labour intensive, and now with the kids gone back to school, will be up to me, so we'll see how much more gets done.  We had hoped to pick a lot more and freeze it, but between everything else going on, time will tell how much of that gets done.   We're considering staggering some of the plantings next year to drag the short season out just a little longer. 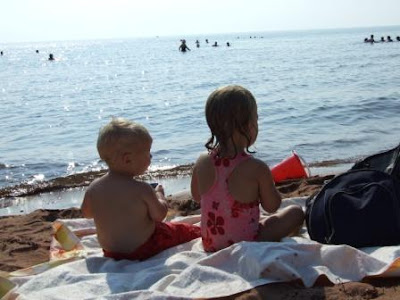 Here's a shot of my lil beach bums enjoying the last days of heat at Chelton beach here on PEI.  Actually I think they're enjoying a juice box and cheezies here, but also taking in the sights.  They have their mother's addiction to people watching down to a science.  Plus, they get away with staring much easier than I do.
So although Earl was a bit of a bust, the air has managed to change and sleep is not a sweaty struggle anymore.  There is something about this time of year that I love so much, or maybe it's just the changing of a season.  Either way, I welcome this autumn with open arms.
Hope this finds you finding a peace within yourself, whatever that may be.
-Sally
Posted by Sally at 2:03 PM