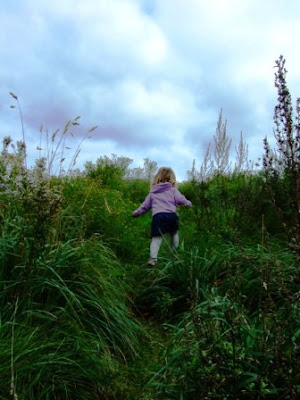 There is something in the air of early autumn that gives it a sense of freedom, adventure and careless abandon.  I love this picture of Lucy making a trail through some wild, tall grass, without a worry in the world. 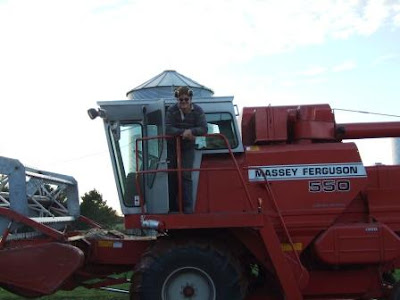 John Denver would say, "Life on the farm is kinda laid back" and in our case at this moment, he would be wrong.  With a few consecutive days of sun, the combine is earning its keep and Mark is a much happier man.  All we have left is one big field of barley and all fingers have been crossed and wood has been knocked that the breakdowns for this year are behind us and between today and tomorrow that should tie up the grain havest.  Until soybeans are ready that is. 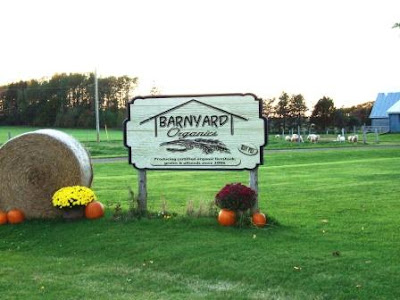 You might notice my ewes in the background of this photo, looking anxious for a ram.  Mark left early this morning to go pick him up in NB so that we can get the breeding on the go.  It will be later than last year at this point, which is a little disappointing, since my lambs were ready earlier, but I am assuming that by the time lambs start arriving in the spring, and I've got a two month old, a one year old and a three year old, life will look plenty busy. 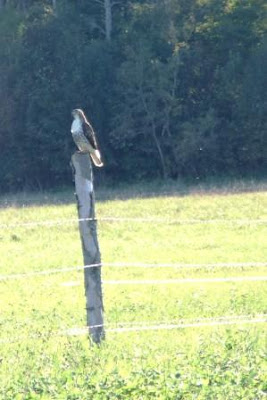 I took this photo of our resident hawk a couple months ago, and unfortunately sort of missed the point of the picture.  Just outside the border of this shot are two of our chicken tractors, full of tender little morsels of dinner for this guy, who was keeping a vigilant eye.  We often see him hunting for mice and other critters around the fields, but the slow, fat meat kings would make a much easier lunch.  Unfortunately for him, he never got one. 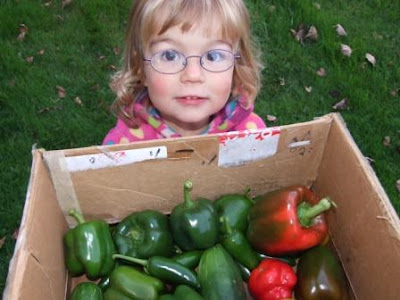 For some reason a good chunk of my usually successful peppers decided to soft rot on me, so Lucy and I cleaned up the pepper bed the other day.  It was a rather dismal harvest relative to other years, but we left the strongest and most rot-resistant looking ones for a bit longer.  Her face is looking a bit strained here as apparently, "These peppers are HEAVY!". And of course, we took in Open Farm Day again this year, as I hope you all did as well.  Being PEI, we managed to explore three farms that day and had a great time at each one.  You can see that Wilson's favorite stop was probably the certified organic apple orchard where instead of picking, he hunkered down on the wagon and munched his way through a couple of the tastiest, crunchiest and healthiest apples in the province!  Beamish's, you make GOOD apples!

For those who are interested, I will make sure I get a more concrete harvest update posted here sometime.  We've had some requests for more info about the Acadia wheat, and once we get a chance to catch our breath and weigh some things, I will pass it along.  Stay posted!

Also, for anyone in the Summerside area, we will be doing our last chicken/lamb drop-off, JUST IN TIME FOR THANKSGIVING, this Thursday from 4:00-5:30 in the area of the Harbour Quay building.  Look for the half ton with the big white freezer on the back.  This gives you just enough time to get your chicken home, thawed out and golden brown for Sunday dinner.  Make this your most sustainable Thanksgiving yet!

Hope this finds you taking deep breaths of the crisp fall air (especially after those yucky days of humidity last week!).