A Review of the Roving Feast

I've decided to expand the mandate of this blog to include my personal opinions on food events that I go to.  This is probably a poor time of year to decide to this, since I've already missed a number of events this summer, but it might be a valuable resource for someone trying to decide whether to spring for a ticket to the latest and greatest foodie event on PEI at least.

Let me just start by calling out whoever decided that 'service fees' on an $80 ticket that is bought at the DOOR, is a completely made up, ridiculous thing.  I am the one doing the service, of buying the damn thing at the door, pay ME $5.  So that's that.

Also, let me clear up that I didn't end up having to buy a ticket.  Well, I did, but the minute I had it in my hand, I was scheming on how to sell it and sneak back in.  Which, in a roundabout way, I managed to do.  Let's leave it at that. 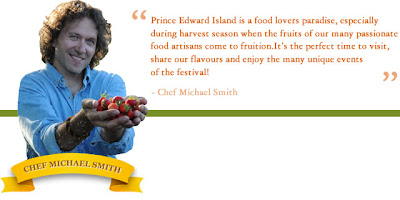 There has been a movement afoot in the media on the island to find out just how much we pay, as a province, to Michael Smith, PEI's "Food Ambassador" to show up at various events and look excited to be there.  I, for one am very curious.  I suspect it is an annual payment beyond my wildest imagination, but I hope I'm wrong.  In any case, he did his duty and was present at the Roving Feast last night, mainly to present the prestigious Taste Our Island Award, which goes to a deserving chef/restaurant who make an effort to serve local products.  It was the fourth year for the award and admittedly, it was fun to be there for the presentation.

The collection of chefs/restaurants that were at the event were the finalists for the award, so each was showcasing a specific local product that they use in their everyday menus.  There was, fish,  pork, potatoes, greens, pumpkins, chicken (GUESS WHO!?), black currents, tomatoes, more fish, bread, lobster, and more food, all produced here on PEI.  That part was really nice.  Actually, the whole event was really nice. But I was only able to enjoy it because we were there for free, as producers.  Had we paid for the event, I suspect my review would be much harsher.  Come to think of it, besides a lack of reasonably priced beverages (alcohol or not), I have no complaints other than the price of the event.  So, finally, here's my more properly worded review of the Roving Feast.

"A balmy night, for the end of the September, saw a group of the most talented and recognized chefs from across Prince Edward Island, come together in the ballroom of the Confederation Center of the Arts in Charlottetown for what is one of the shining jewels in the Fall Flavours Festival crown, The Roving Feast.  Featuring 9 different chefs from restaurants showcasing Island-produced products, each table was a delight to the eyes first, and then a joy to the palate.  Varying from braised, molasses Berkshire pork on a johnny cake biscuit, to lobster salad, to tomato and zucchini soup in a gluten free bread bowl and all things between, there were no empty bellies, although perhaps a few empty pockets.  There was a unanimous sense of jovial contentment with the quality of the food as everyone meandered from table to table, balancing drink and plate and information booklet, containing profiles of both the chefs and their respective producers/suppliers.  Chef Chris Buccheri, brought in from Chicago, IL to showcase a new take on an island product made an interesting, if not totally unique to the majority of the attendees, chicken dish featuring a pate of chicken, giblets, pistachios and various seasonings, poached in the skin of the chicken.  Although very tasty, one attendee was heard, between bites, comparing the dish to 'what very expensive cat food' might taste like.  Somehow it didn't sound like an insult necessarily.
A few of the most popular dishes included some classic crab cakes made with Island potatoes, on a bed of organic greens with caper creme fraiche.  The aforementioned pork, as well as the lobster salad also took home top honours amongst the small, but sincere crowd.  The desert favorite belonged to an amazing pumpkin cream cheese brownie with homemade ice cream and a pumpkin spice sauce.  That is not to say that there were no curious glances as people poked at their poached mackerel paired with tempura battered 'pulled pork', or downed their tomato and basil shooter, or tried to keep a straight, important-looking face over the beautiful but strikingly tart black currents.
At the price of admission The Roving Feast is not an event 'for the masses' and some of the dishes require a palate (and perhaps imagination) beyond that of your humble writer, but is instead an intimate evening of wandering, chatting, eating and drinking, complimenting and criticizing and going home to lie down from having eaten too many small plates of a wide variety of foods.   At least the price of the ticket gives way to a sense of obligation to be very honest about the quality of the dishes and personal opinions on taste.  And being at a small event where a 7 foot tall celebrity chef takes his time getting around the room, speaking seemingly sincerely to all, makes everyone feel just a little bit more important for having been there."

See you all on Sunday at the Organic Harvest Festival!