I cleaned out my 'other' camera tonight and found a few treasures from the summer, and from recently, so here they are!
Firstly, a picture of our latest addition.  Well, actually we've had him for a few months.  Mark's sister kept a few chickens at her house up the road, in the woods and they promptly became a fox lunch, except for one hanger on, a young chick who came to Barnyard Organics as a safe haven.  The poor thing wasn't here a week until it somehow managed to survive yet another fox episode at our place that fateful night.  Anyway, it stuck around and was always too 'boney' to bother sending with the meat kings to the abbattoir, so we kept it in with layers.  It became evident throughout the summer that this wasn't just any regular old chicken.  We had ourselves a Delaware rooster. 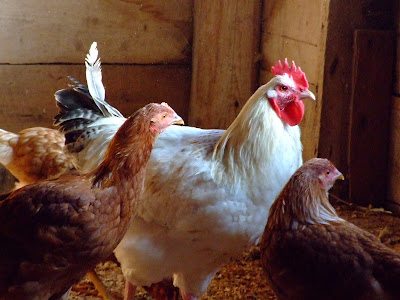 I'm not overly excited about having a rooster around, but Mark is keen on it, with varying reasons, but mostly I think he just feels outnumbered on the farm with all my 'ladies' in the pasture and in the coop, and Rosie.  So for now, the rooster stays.  He is consistent with his crowing if nothing else.  6 am every morning whether you like it or not, he wakes up the farmyard.  So far he's only living with the young hens (who have finally started to lay! yay!), but one of these days we'll let him out with the old girls and see what happens.  Probably just a lot of strutting around, if I know men. 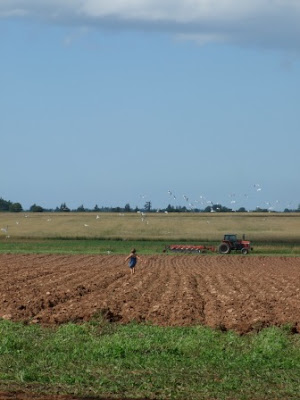 This is one of those pictures you forgot you took, but find on your camera as a special surprise.  All summer, as the field beside the house went through clover, cutting, baling, plowing, harrowing, a ditching project, planting, harrowing again, the kids revelled in every stage, but especially the one that involved scaring the seagulls only to watch them land and scare them again.  I love this picture of Lucy so carefree, stirring up seagulls as she balances on a furrow.
Something that was a topic of conversation in the farmyard this summer was the pending doom of a HUGE elm tree next to the farmhouse that had contracted dutch elm disease and was showing evident signs of imminent death.  Many of the larger branches were already dead and the discussions of which way it would eventually fall were not optimistic, so it was decided to bring it down before it fell down. 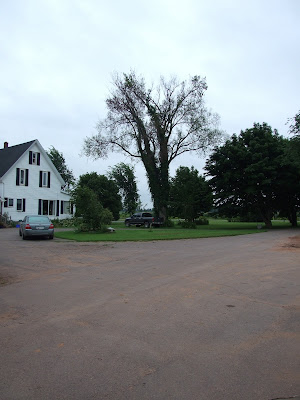 Apparently Mark fancied himself an arbourist one weekend while I was gone and decided to borrow a boom truck to take down the monster.  Wendell maintains enough caution for everyone, so I should have know it would go fine, but coming home to find a camera full of pictures of a novice woodsman, chain saw running over his head, 50 ft in the air, was somewhat unnerving. Anyway, the thing came down without a hitch and the giant stump that's left tells a tale of a tree at least 150 years old.
﻿ 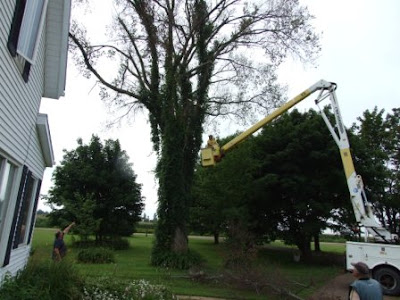 And apparently during lunch that day, when Mark looked out, there was a woodpecker working away on what remained of the tree (at that point, the main trunk was still there).  I am convinced he was cleaning up the beetle that carries dutch elm, and lets hope so for the sake of the even bigger, beautiful tree in the backyard.  ﻿ 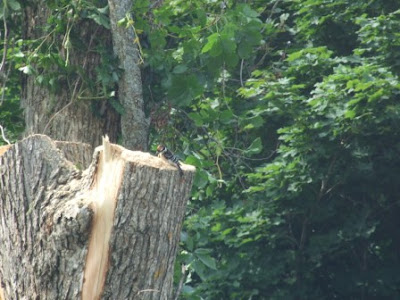 The kids and I cleaned up the garden today and I finally gave in and admitted that my huge, unintentional squash yield had ripened all it could ripen. Here's the kids picking out their favorites.  Taking all squash recipes/suggestions.
﻿
﻿
﻿ 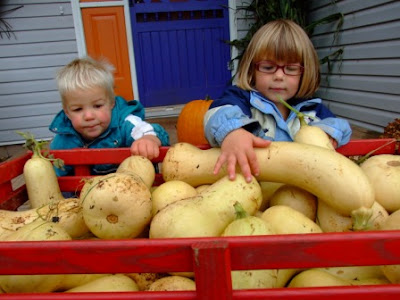 ﻿
Well, I have been completely exhausted for the past couple weeks and when I mentioned to Mark tonight the possibility that I might need my thyroid tested again he replied, "Yeah, can you get a transplant?" so I think I need some sleep, as it doesn't take a rocket scientist to read into that response.
﻿ 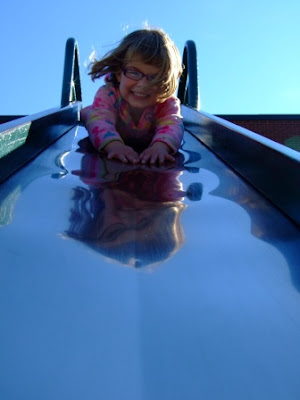 This last picture is from today on a slide at the local elementary school playground.  What a glorious day it was!  I LOVE this time of year and the surprise warm, sunshiny days that always feel like 'the last one' before winter hits.  Like a present you would be foolish to waste.
Hope this finds you enjoying the leaves and breeze and taking time to have some slide and swing time while you still can.  ﻿
-Sally