I just cannot believe that we are already at the end of October.  I feel like this year has gone by faster than any other.  I keep forgetting what season we're in and sometimes feel like maybe it's spring and we're headed for summer, rather than the snowy clime of winter.  Had a stark reminder last night though as strong winds blew in some rain mixed with snow, and lots of cold temperatures.  We didn't get any accumulation like New Brunswick, but I think our winds are always stronger, so we made up for it in naked trees and Halloween decorations in the ditches.

My evenings have been eaten up by my trying to organize a presentation that I'm making at the ACORN conference as part of the opening keynote and I've really been struggling.  I enjoy public speaking, and I know once I get going, it'll be fine, but I've had a hard time articulating what it is exactly that I want to say.  Due in part, I think, to the varied audience.  I've speculated that because it's in Halifax and has been well advertised in the young-concerned-eaters circles, there will be a number of new-to-farming or even just thinking-about-one-day-having-a-nice-garden-farmers who may or may not know the ins and outs of organics, but also some of the pioneers of organics in the region.  So it's a mixed bag, and I don't really feel like I have a lot of offer either of those demographics.   Anyway, I'm plugging away and Mark assures me that so far, so good.  Any advice is welcome.

Mark spent a couple days in the combine, working away at the beans, and thankfully was able to make a joke or two about the sad state of the yields this year.  The weeds really won the battle this year and at this point, I think we just want to be done harvesting and start thinking about next year, and how we're going to source enough beans to fill the market we have.  (If you have organic soy beans, we want them!)
I haven't had a chance to post anything about the new dryer than we purchased, for the big tank.  It's pretty cool and despite my initial concerns, seems to do what it claims it would.  I'll get some pictures up soon.  I wish I had taken pictures of it being installed since, although not quite as smooth as shown on the manufacturer's website, was still pretty slick; especially since it was put in after the tank was built.

Ran my second 5k race on Saturday morning. I wasn't totally prepared in regards to training, but I thought it would be good practice and it was fun.  Everyone was dressed up in costumes and it was a real laid back affair.  I've been training with Thayne in the stroller this time and it's an added challenge for sure, so I wasn't too surprised that my time was down from the last race, but a little disappointed.  Also disappointed that I didn't win the costume prize, what with these..err...voluptuous legs decked out in flames! 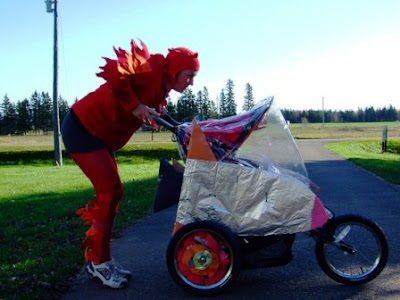 Well, the kids have had enough of me being on the computer and we have a costume party to get to if we can get ourselves pulled together this morning.

Looking forward to the slower days of winter.  Those are coming right?  How long do I have to talk about them for them to actually arrive?