It was over Thanksgiving when I was telling Mark's aunt about our calf Poppy and how everytime we have meat for supper we have to discuss whether it's Poppy or someone else.  Lucy has figured out the difference between chicken and beef, but Wilson likes to call everything chicken, or bacon (and mostly those two sound pretty similar, so who knows). Once we determine the species, the forks still just sticks up in the air until Wilson is satisfied as to the source of whatever is on it.
I wasn't really thinking much about it as I was sharing this with Mark's shocked (and I think disgusted) aunt, but later it occured to me just how fortunate we are to be able to have that connection with our food.  Lucy met the farmer from whose farm gate stand we buy most of our veggies, so we often have 'Raymond' for supper, with our broccolli or cucumbers or potatoes.  The chickens don't have names, but they always have to mention how they 'used to be in the pasture with Rosie'.  Our pork comes from "Ranald with the stamp at the market" because he always makes a point of stamping the kids' hands with a pig stamp, and he's got a fun little video of his pigs rolling around in the mud and tromping through the apple orchard.
Anyway, I just felt so lucky to have such a direct knowledge of our main raw food products and was really excited that the kids are so sticky about giving everything a name before eating.  If that doesn't make you appreciate the food and what goes into eating, I don't know what does.
So, it was a bit contradictory that I found myself at our newly renovated Superstore, excited to be going through the self serve check out.  I've been through them before, at other big box stores, but it was while I was joyously tossing my items into the bags without having to talk to ANYbody that it occured to me that this sort of technology that pushes us just that much further from making any connection with our food.  It's like a system of robots, who mix up a concoction of fake ingredients, package em up, send it off to a distributor who sends it off to a store where it's picked up, beeped through, taken home, heated and eaten.  I know this sounds a bit reaching to some of you, but the thing is, I recognize that these self serve check outs eventually take somebody's job and that interaction with other humans is what keeps us sane, even if it's only as small as chit chat at the cash, and more importantly takes that last, tangible human part of food away. Now you can buy a jug of milk or an onion or a chicken without ever ONCE having to talk to a person.  I know, I know, that cashier has nothing to do with that onion or milk, but there is just something there, or rather, something missing when buying food becomes an automated chore between you and a machine.

That said,I couldn't help but enjoying myself, zipping my items through at a good clip, packaging them how I like and getting out of there as soon as possible, so what does that say about me?

I am currently having a little internal crisis over the ACORN conference since I am supposed to 'do my talk' tomorrow morning and the weather is sounding less than cooperative for getting over the bridge and sometimes more dangerous, through the Cobequid Pass.  Mark has suggested I go over tonight, which is probably wise, but I'll be away for two night as it is, one more will only make it that much harder to stay at my sheep course in Truro on Sunday, instead of zipping home at noon, like the bad student I can be when it comes to my babies.

My sister, April has been on my case about Halloween pics of the kids and I'm finally going to get them up. 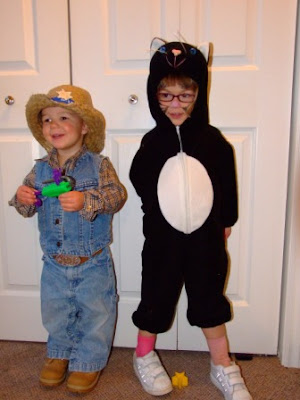 This was at 5:50 as we were gearing up to go out the door.  For two weeks previous to this, the kids have been going through the trunk of costumes and each time Lucy would come back to the 'kitty' costume which was too big last year and say that THIS year she would get to go as the kitty.  Despite having worn it around the house for two weeks, it was only at 5:50 on Halloween night, with face painted that she decided it wouldn't "stay out of my bum", and was a little on the short side (gee, wish I had've suggested that throughout the two weeks of dress rehearsal...ahem) so in a frantic search, we managed to pick out another, if not exactly ideal, more comfortable option. 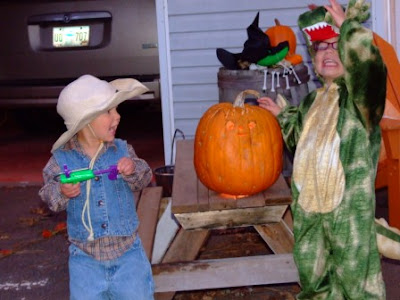 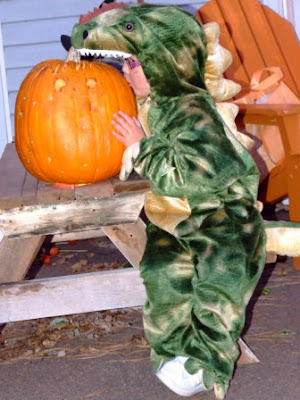 Even Lucy wasn't sure what to say when people asked what she was, but she was comfortable and got just as many treats as before so it didn't really matter.  Something between a crocodile and a lizard perhaps?
And as you can see, the cowboy was quite satisfied with his choice.  The gun soon lost it's shine in favour of a treat bag, but he was pretty good at his 'ye haw' before the night was over.
This year we carved pumpkins togther for the first time (usually it's just Mark and I) and the kids had a great time. 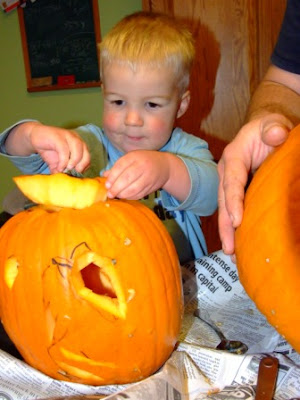 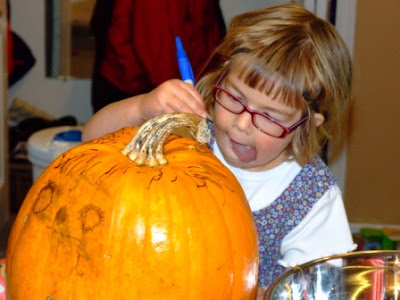 I had to post this picture of Lucy drawing her jack o lantern face, because although I've noticed it before, this was the first time I caught a picture of her working with her tongue out.  Anytime she concentrates hard on a task, out it comes and I can't help but think of her Uncle Doug and how maybe that is somehow connected to a short temper as well?  ;)
﻿ 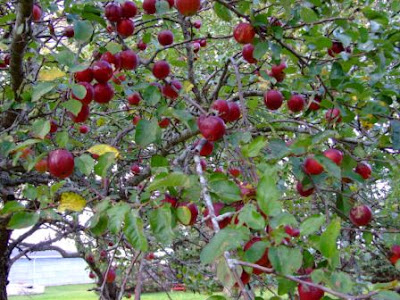 Last picture is of our late apple tree.  I don't know the variety but they are hard, crispy and so sweet.  After a few couple frosts they're even sweeter and I've been trying to get some apple-related treats made for the freezer, but they're delicious just as 'eaters'.  Anyway, I took the picture because the yield this year is amazing.  I've never seen it so full since I moved here.  Every year Mark and I say we need to get out and prune the orchard (which consists of 5 trees), but it never gets done and every year I think the yield is going to drop off as the trees get more and more out of control.  Mother Nature proved me wrong this year though and we're enjoying it.

We had a small hiccup with the combine last week, with just a few wet acres of beans left, but they're all but finished now and Mark has high hopes to get it all finished today, which is always cause for celebration.  Putting that combine away is a truly satisfying mark that winter is for certain on its way.

Well, I hope this finds you eating well, naming your food and cozy on the cool nights.  Batten down the hatches for the storm(s) tonight! And if you're in Halifax, be sure to check out some of the ACORN conference!