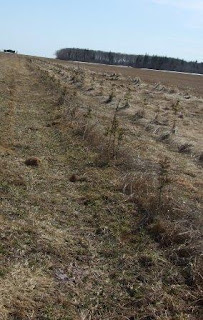 Young trees for a new hedgerow - a rare sight in potato country these days.

I won't assume to know what the snow situation is wherever you might be, but here on PEI, the first snow is melting and is for the most part, gone.  As we went for a short Sunday drive today, I noticed the mostly bare fields with a swath of snow sticking around the edges where the hedgerows are.  Like spring, when the long anticipated exposure of the soil peeks up through the snow and farmers get the itch to 'get on the land', there is something about the snow that won't leave around the edges that reminds us that we're not really the ones in charge, no matter how ready WE are.
Also, on today's Sunday drive, Mark pointed out, over and over, how many hedgerows have been taken out lately.  There is one neighbouring farmer of ours in particular has taken an especially strong aversion to those pesky trees and 'opened up' field after field after field, creating huge prairies of landscape, all bleeding one into the other.
As we drove we critically discussed the reasoning for so much hedgerow removal with cycism and disgust, but I really wanted to know why.  We know the farmers and know that they are not unreasonable people so I was convinced that there had to be a really good reason to invest the time and money into removing well established hedgerows.  Some of my best speculations added up to:

-bigger fields=efficiency?
I realize I'm looking at this through my stubborn, self-righteous lens, but I'm shocked that modern, educated farmers would seriously be able to weigh those reasons against the benefits of hedgerows and have the removal of trees come out on top.
So once again, I'm faced with questioning this whole dichotomy of agriCULTURE versus agriBUSINESS and the fact that they are getting farther and farther apart.  For the past three years I thought we were so lucky to be able to get trees from the Dept. of Forestry here for new hedgerows and to maintain existing ones, since I assumed that they would be a hot commodity but then I'm faced with the reality that big corporations (in this case processors like Cavendish) are demanding their farmers to get bigger and more 'efficient' (ie. build big warehouses and/or take out trees) or lose their contract.  I'm not a potato farmer so I can only assume that last statement, but I can't come up with another reasonable explanation that makes enough sense to me.
SURELY THE VALUE OF THE SNOW IN THE SPRING MAKES IT WORTHWHILE KEEPING THE HEDGEROW!?!?!?!

A few summers ago I worked on a pilot project called the Ecological Goods and Services (EG&S)Program, designed to pay farmers to go above and beyond environmental regulations.  It became the basis for PEI's Alternative Land Use Services (ALUS) which is a really pared down version of the program, but has some of the same bones of the EG&S.  Anyway, under the EG&S there was a nice payment for hedgerows which met certain criteria (certain width, height and mixture of species, etc.) and now I can really appreciate the value of that program.  I hated the program when I started working with it because I didn't understand why the public should be expected to pay the farmer to do things that ultimately benefit themselves in the end, but are considered 'inconveniences' in the scheme of production.  If Cavendish truly is the driving force behind the removal of those trees this may be the perfect illustration of why a program like EG&S is so important.  It gives the farmer the opportunity to weigh the options and consider the real benefits against the pressures and 'suggestions' of their 'customer'.

Yes, it's a Sunday in winter and I'm making up for lost blog/rant time. Enjoy!