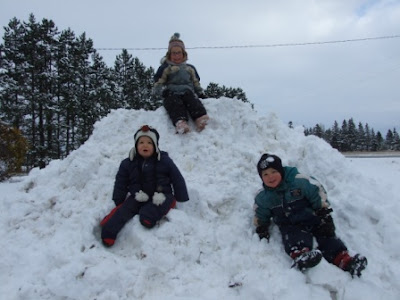 Yep, first snowfall and it`s a dandy!  Well, I guess we  had a little skiff of snow a week or so ago, but this one is `fo real`!  Mark is trying to prove me to how useful plowing can be versus blowing (since he wants to buy a plow for the truck) so he made this `snow mountain` for the kids to play on this morning with the little tractor.  It WAS a good time until all the fingers got too cold.  Well, I`ll speak for me, since I know that Thayne probably wouldn`t say it was a `good time`.  What a terrible age he is for snow.  Can`t get around in it, it`s just a cold, wet hinderance.  For a boy who seems to always have a smile, this is as happy as I could get him today. 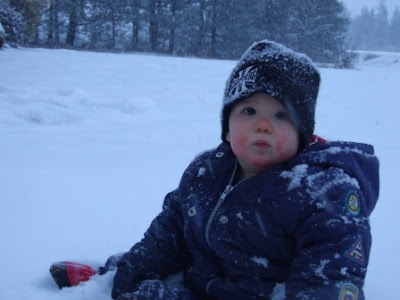 When he and I did chores last night in the thick of the snowfall, he seemed really fascinated with it and gave me extra time to feed the sheep and even give Rosie a little brushing, but it was clear today that fascination has turned to frustration and disgust.  Even the sled was NOT fun.
I however, was really enjoying the snow in my old `maternity` snowsuit, sans belly.  I could really play and climb and slide this time, which is a nice change for me!  And of course, I know it`s really flattering, so that helps. (note: the sarcasm-this IS the snowsuit that Mark lovingly calls the ``Pea Green Boat``.)
Here`s Thayne finally having found a vantage point from which he CAN enjoy the white stuff.
﻿ 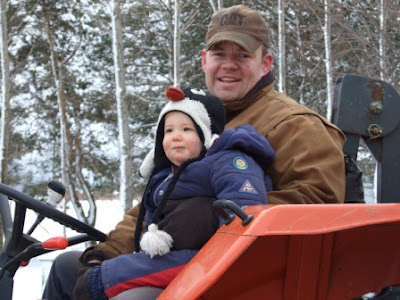 Since I last posted we celebrated a birthday here, with a request for a Rainbow cake from the birthday girl.  You have to use your imagination a little bit, since I was short on time and long on cheap candy, but here`s the rainbow with some gold on either end.  ﻿ 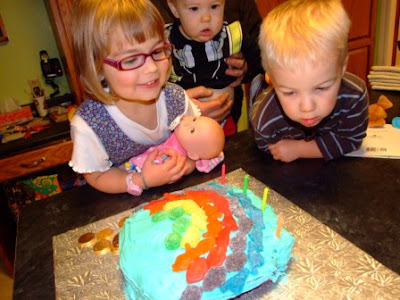 Lucy got 12 little buckets of brightly coloured playdough for her birthday, which I was skeptical about since we already have lots of the homemade salt stuff around, but there is something to be said for not having to wash your hands every 3 minutes due to the dehydration factor that comes with playing with salt.  And it shows in how much play that dough gets from these two kids. Lucy insisted I take this picture of her drawing and then a sculpture of her drawing of me. So for those of you who claim I don`t post enough pictures of myself, here ya go!  :)  Also, note the colour of the sculpture, 24 hours after having opened 12 different colours. haha. 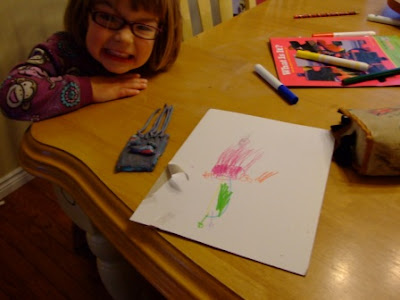 In farm news, there`s not much.  Mark is done field work.  Well, actually he expects to get back out when the snow goes (which it inevitably will with some mild temps on their way this weekend) and `get across some land` with the discs.  He`s on a couchgrass killing mission these days, convinced that the frost will kill it if it`s exposed.  Here`s hoping! But really, if winter settled in tomorrow, I think Mark would be satisfied with how much he`s gotten done for this year, so that`s always nice.
The animals have been scrounging the pastures until today when they gave up and laid around the barn, blatting whenever they heard or saw someone nearby, waiting for feed.  The grass outside probably hasn`t had much nutritional value since some of the harder frosts, but they were getting enough to not have to cut into the hay inventory.  I`ve got lambs coming at Christmas (yeah, my great timing at work again) so I`ve started to introduce a touch of grain and probiotic to my `girls`.  We also threw Duncan (the ram) back in to breed any girls that hadn`t caught the first time around.  I wasn`t going to, but the last module of a sheep course I`m taking was very production oriented and I started to question my shepherding management.  I was hoping to get the whole flock onto a once a year, late Nov-early Dec. lambing, but since no sheep naturally breeds at their best at that time of year, I`m always worried that some of them haven`t `caught` and I`m feeding a `freeloader`.  Then I remember that I have an old girl whose had mastitis, who I purposely try to prevent getting pregnant just because I like her; she is one the first ones Mom gave me and she`s the leader of the pack, and all logic goes out the window.  So take that, optimum production percentages.  bah.
Well, it`s been a long day of snow-wrangling, snot-wiping and sock-changing, so I`m off to get some sleep.  Maybe one more bowl of snow before I do though.  Mmmm.  The one food that you can still only get at a certain time of year! 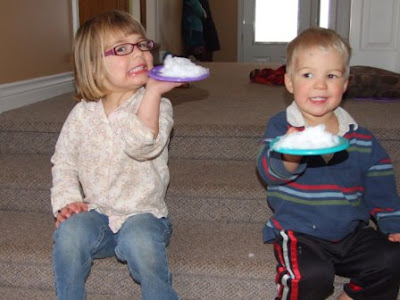