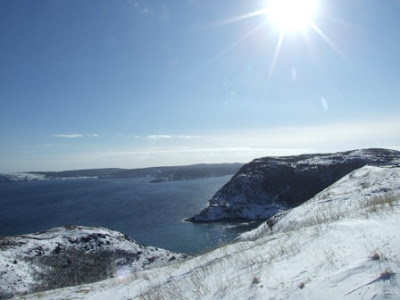 I didn't realize how few pictures I took of our trip to Nfld. until tonight when I uploaded them.  Then I remembered that since Mark had his phone, we relied on it a lot, which is pretty useless as a camera really.  Lesson learned that convenience rarely equals quality.  Anyway, here's just a couple with some narration. 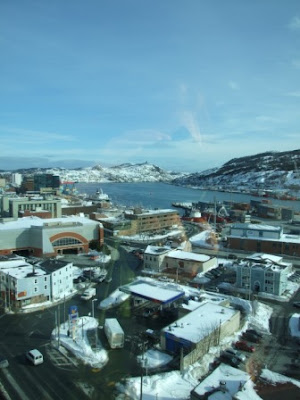 This was the view from our second hotel where we stayed for two nights (good friend Lanna scored us a free one so we treated ourselves to the second one).  The 11th floor of the Delta, downtown St. John's.  You can see Cabot Tower at the top of Signal Hill waaayyyyy in the distance, in the middle of the shot.  Well, shortly after checking in and taking this picture we decided to start walking that way and ended up hiking all the way up the damn hill and back down the side, making our own trail in the snow as we returned.  It was a beautiful day and in the end I was glad we walked it, but I definitely did my share of complaining on the way up (and Mark's share too). 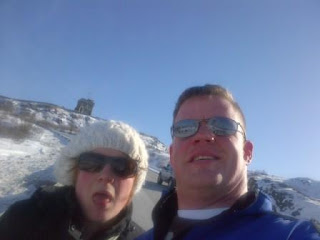 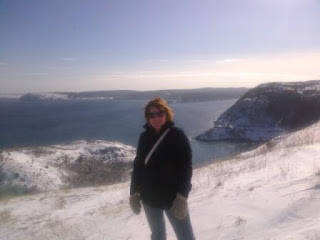 above two pictures from said "useless phone"
My brother had fandangled us a super great deal on a jacuzzi suite at the Super8 too (via the wonderful world of Kijiji) so we had pretty amazing accomodations while we there. (Not to leave out the futon we stayed on the last night, which was cozy and free and came with good food and lots of laughs with friends. :)  ) 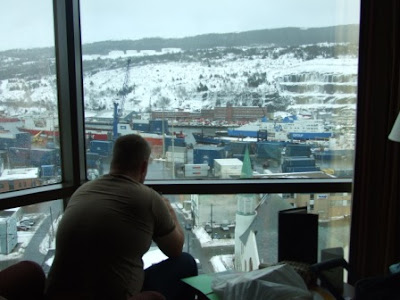 While I enjoyed the view of the city and Signal Hill, Mark was far more appreciative of the action going on at the harbour and one day while I enjoyed a nap on crisp, white sheets, he spent a couple of hours watching a container ship being loaded by various forklifts, cranes and trucks.  I said that he would make a good terrorist or drug lord, keeping such a close eye on the shipping traffic.  He took some videos to watch with Wilson and marvelled at how union workers don't miss a single second of break time.  They leave a container hanging in mid-air the minute it strikes 3 o'clock. For that afternoon it was sort of like being on vacation with a really well-behaved version of Wilson, content to watch 'Mighty Machines'. 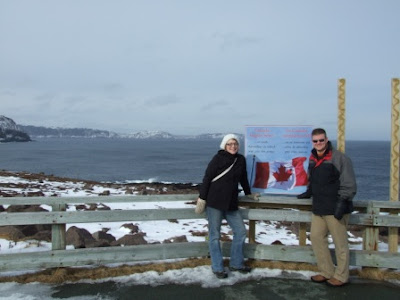 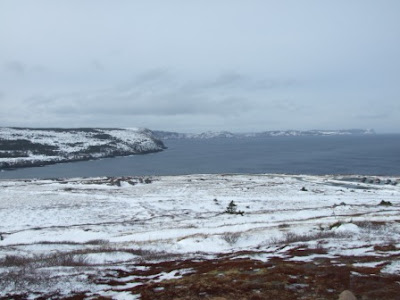 This is us at Cape Spear and the whole time I was there I couldn't help but wonder at what the early explorers thought when they landed at such a desolate landscape.  I would have sat down, had a good bawl, got back on my boat and went home, warning anyone else thinking of doing the same that THERE IS NOTHING THERE!  Just a big, cold, naked rock. Brrrr.

It was an amazing trip though.  St. John's is a great city and as promised, we met some great characters and everyone was really nice.  The first night we arrived, we were taken to the pub where The Republic of Doyle is based, watched it with the local crowd (hushed during the show, rowdy in the commercial breaks) and had some of the best fish and chips we've ever eaten.  Our gracious hosts (Bryan and Lanna) continued that hospitality all the way through and we look forward to getting back someday (and this time Mark won't miss that container ship leaving the harbour!).

Now that we're back, life took no time settling itself back into 'normality'.  Today, I was researching some strange mouth disease I discovered in one of the lambs, cutting tofu, writing an email to an ACORN board member, wiping a nose, tickling a kid with my toes and talking to the eye doc's secretary, all at the same time.  It occured to me at one point that Mark's idea of multi-tasking is checking Facebook while sitting on the toilet.  But then, he is the one who held onto the smelly, struggling, 55lb. lamb while I drove us to the vet clinic today, so I will be kind.  The vet thinks it's some kind of bacterial infection and not contagious, but it sure is gross.  I won't go into the details, but the smell is gag-a-riffic.  Anyway, of course he is my biggest, nicest lamb and now he's no longer organic, but here's hoping that whatever it is clears itself up.

Something in the air last night prevented most of us in this house from getting a good sleep, so I'm off to try to catch up early tonight.
I will try to get a roller derby shot soon for all you who so desire, although I've chosen a name so that contest is over.
"Please welcome to the track, at 5'7", 175 lbs, an organic farmer, lover of seeds and soil, Vandana Shove'her."
It's a reference to Dr. Vandana Shiva, who, concidentally enough is coming to NS and NB this week.  She is an 'eco activist' who believes in and promotes seed security, women's rights, organic farming methods, and other important things, all with a little sparkle in her eye and a very deliberate, peaceful beauty to it all. She's a little Indian woman who moves like fluid in draping sari's.  Who else to better exemplify an agricultural-minded roller girl's alter ego?!

Anyway, I hope this finds you well rested.