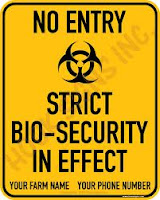 I think I've referenced the sheep course I've been taking at the NSAC for the past few months.  It's a four module course, taking place over four weekends this winter and the last one is coming up in April.  Overall, I'd say that maybe I learned a few things, but it has been fairly unhelpful in terms of organic production.  There has been virtually nothing regarding organic in the curriculum and nearly everytime I ask something about organic options, there is a)a dismissal of options or b)an ignorance of options.  But, that's ok. I know that the mind-set takes a while to adopt and the research is either new or non-existant, so I can appreciate that the veteran (as in experience not age) shepherds leading the course teach what they know.  Unfortunately, there are a lot of very small scale, 'naturally-minded' individuals taking the course and are only getting one side of the story.
Anyway, this isn't about the inadequacies of the course.  It's in reference to a comment made on the first day and something that has been alluded to since.  The main teacher was talking about biosecurity and his experience working with government at the national level.  He said that in one meeting he sat in on with some very senior officials, they said that it will soon come to the point that no one will eligible for gov't funding unless they have a biosecurity plan in place.
So here's the thing, before I go any further.  If you operate a 'farm' that 'requires' biosecurity at this point, and you are comfortable with all the rules that go with that, that is fine.  Our messed up food system requires farmers like you and although I fundamentally disagree with keeping animals separate from the outside world, I understand why it happens and that biosecurity is important to that method of production.
But there's no reason that I should ever have to implement it.
In some ways, I suppose I already am. I put in eartags because I can't sell an animal unless I do.  I have had a farm tour dip their footwear when I thought there was a remote possibility of a fellow shepherd bringing in something.  I only buy livestock from farms and people I trust and I try to maintain a relatively closed flock when it's reasonable. So in some ways, I suppose I'm already a cog in the wheel.
That said, here's two reasons I hate the idea of biosecurity.
1)we already have mothers and their kids who are terrified of dirt and germs.  Our own, human immune systems are so full of antibacterial soaps, cleaners, wipes and sprays that we are sick at the first sign of a sneeze.  If we shut animals away from any opportunity to be exposed to germs, what do we expect?  The theory is that if they are never exposed to disease, they will never get sick and never need meds.  But we all know that there is no such thing as a sterile environment with a living being in it and bacteria are inevitable.  If we are exposed to something, our immunity is increased and we are healthier for it the next time.  So, if that exposure never happens and disease hits,there is zero immunity and suddenly the reliance on antibiotics is infinite.  There is no such thing as 100% confinement agriculture under organic standards because a)it's inhumane and b)it makes sense that to be healthy, animals need exposure to the elements.  How is it that our hens who scratch out a living (haahh! awesome pun!) on the lawn are able to survive when according the CFIA they should be dead from bird flu by now.  After all, we aren't preventing contact with wild birds and we don't limit exposure to visitors who often (gasp!) handle them (and then don't wash their hands! double Gasp!)
Pigs like to roll in mud, chickens like to scratch in dirt, sheep like to graze on lush pastures.  They are physiologically designed to do those things.  Removing that and replacing it with clean, washable plastic pens seems like a recipe for a world of antibiotic reliant critters, human and not so human.
The second and perhaps more important reason that I hate biosecurity is
b)we are already far enough removed from our farms that we hardly need another reason to feel disconnected.  If there is ever a hope in hell of fixing our broken food system, it has to start with eaters.  And there is nothing quite as mysterious and ominous as a huge red stop sign at a giant, non-descript building we are prohibited to enter which apparently contains our next meal?!  Plastic suits, food dips, sign in sheets, etc. are not exactly the kind of welcome mat we should be tossing out to consumers.  The further people get from the real source of their food, the further we get from being a healthy, fair and environmentally sustainable society.


On an unrelated note of frustration, I think I've failed to share this video regarding GMO alfalfa.  It is a cutsey cartoon about a seriously awful idea.  This changes things a lot more than the corn, cotton and soybean that came before it.  It's only 3:00 mins.

In the political circles, I am curious to see what happens with Mulcair vs. Harper.  He is perhaps what the NDP need to face the blue machine, but he is certainly no Jack.  Wishing him the best of luck. I was thinking the other day about when I was little and my parents would be watching political debates and I would listen to the NDP or Greens and I would comment that they sounded really good and the response would be "They can say whatever they want, because they know they'll never get elected".  And that used to be true.  I'm thankful it's not anymore.  :)

Hope this finds you pouring over your new garden seeds for the spring, fidgiting in anticipation.  :)