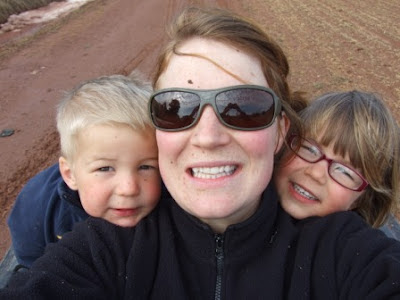 On Facebook the other day I watched a trailer for a documentary called "Play Again" about how kids are losing/have lost touch with nature and the consequences of that.  It sure made me want to see the documentary.  Anyway, there is a quotation at the end of the trailer that goes along the lines of "If they do not know it, they will not value it. And if they do not value it, they will lose it."  It seems really obvious, but that could apply to anything of importance.  It also makes me wonder if the federal Conservatives perhaps spent too much time inside and never went fishing, given the latest move to remove fish habitat protection from the Fisheries Act (to make pipelines easier).
Anyway, partly with that on my mind, but also party due to the tropical temps (ok, not tropical but definitely unseasonably warm), I took Wilson and Lucy on a 'big adventure' today in 'the woods'.  "The woods" is in quotation marks because there's really no such thing as forest in Freetown, but there's a brook runs through our property where a beaver has set up camp and so the dampish areas around feel a bit like what woods might ressemble. I'll rely on the NB side of their heritage to show them a real 'woods'.    :) 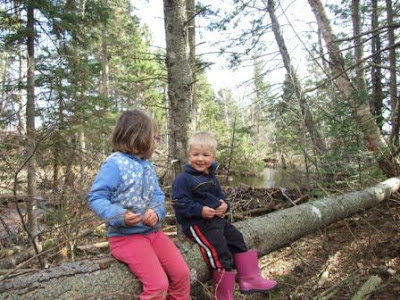 Wilson of course chose the most practical, three-sizes-too-big, fushia rubber boots for tramping through brush. 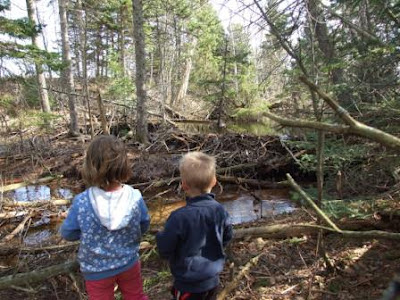 Checkin out the 'GIANT DAM'! 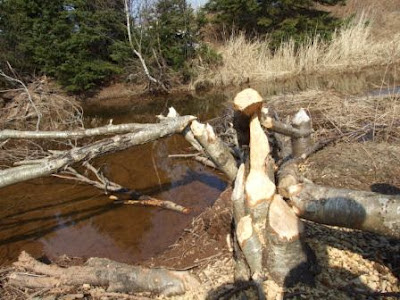 The beavers had set up camp last summer/fall and then in the winter, a neighbour had found a beaver carcass in the middle of the field, half eaten (coyotes I assume?) so I wasn't sure if maybe there was only one and now it would all fall to neglect, but nope, right away we saw lots of signs of fresh beaver business (and thus, LOTS of tiny stumps for short legs to trip over everywhere).  Lucy was a real trooper and was super interested in everything and would have spent all day treking around.  Wilson, on the other hand will make a great librarian/accountant/model/skeevy car salesman/Cdn. senator.  He likes having clean, soft hands, staying away from jabby things, yelling at everyone when they get ahead and whining when things get a little wet.  I know, it's just the age, but it sure was annoying after a while.
Anyway, overall, a super great adventure and I'm looking forward to more! And since I'm the one who milks the cow this time around, I'm suddenly much less willing to dump the extra milk we get than I was when Mark was the milker.  Strange eh? haha.  Anyway, I've been trying to get creative with it all and had some successes and failures.
The first butter I made was a failure for two reasons: a)the cream had gone a bit sour and the smell threw me off, so I wasn't paying close enough attention when beating it (because I didn't really care if it turned out with that smell) and b) my powerful new food processor turned it into some sour strange consistency of boiled icing.  It literally only takes about 20 seconds in this processor to make butter. It's crazy.  The downfall of using a processor is that it can only take a bit at a time, but at that pace, I don't mind. My other projects include yogurt (which turns out, but is not as silky and smooth as I remember having made before.  suggestions?) and ricotta cheese.  I'd only ever used ricotta cheese once before, but after Mark's aunt and cousin recommended it, I thought I'd give it a whirl and holy smokes- it's so good!  I use it a lot now and find excuses to make lasagna and other pasta-y dishes. It melts really nice, but is also good as a super mild feta replacement.  Crumbly, but creamy and pure tasting.   And EASY (although, not overly fast). 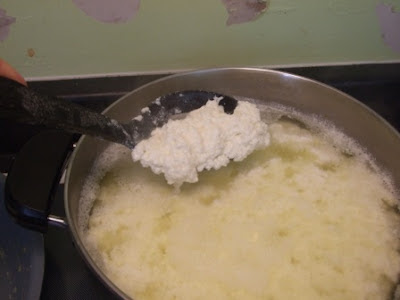 Doesn't look like much here, but after refridgeration-mmmmmm.  The recipe suggests eating it warm with fruit, but I haven't gone there yet. 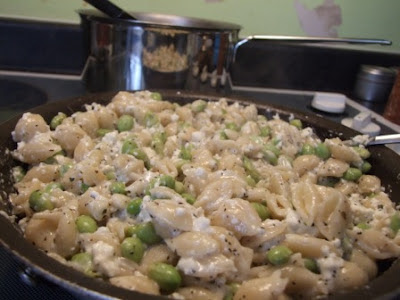 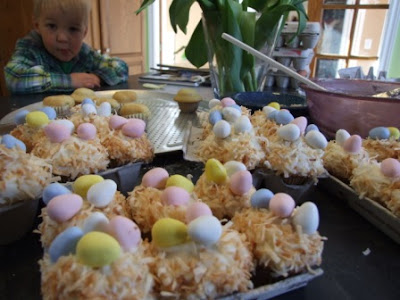 Then, I had to post a pic of these CUTE cupcakes I made for a roller derby fundraiser bake sale.  Original creation and pretty tasty if I could say so myself.  And a great project for helpers too.  The 'nest' is just toasted coconut.  Throw some icing on the cupcake, roll it in the coconut, toss on some eggs and ta da!  Take THAT Pinterest!  :)

I've got some draft blog entries saved up regarding some more serious ag-related issues, but they're not quite ready for the presses, so hopefully one of these days I'll get them posted.  I'm particularly annoyed over this whole 'Bio-security' push that's on in agri-food these days.  More to come on that one.

Well, off to bed.  A 'real' adventure planned for tomorrow- a trip to NB! YaY!  We didn't tell the kids so that they would sleep tonight, tomorrow morning will be chaos as it is.  :)

Hope this finds you dirty, tired and happy.