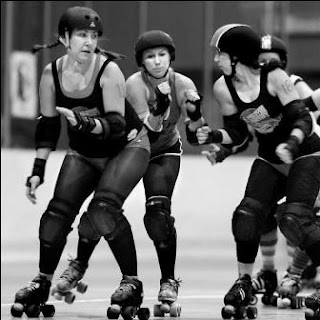 Sometimes I say that this entry has little to do with farming and then it ends up coming back to the farm in the end, but this time, I really mean it.  This entry has NOTHING to do with farming, family or even politics.  This is still a farm blog and I promise not to veer often, but I feel so strongly about this that I can't just leave it all in my head. That said, much of it will likely not make sense to many outside of the league.

I have never been a team player.  I always hated 'group projects' and I don't share well.  I like being in control of things and I fancy myself more of a leader than a follower.  The only team sport I ever played was rugby, and my teammates could attest that I was really in it for the social aspect, rather than the teamwork and sport of it.
I am a changed woman.

This past weekend I left Freetown with a van load of ladies headed to Moncton for a two day roller derby training camp and tournament called the Muddy River Jamboree, organized by Moncton's league, the Muddy River Rollers.  Admittedly I was pretty anxious going in.  I was firstly feeling a lot of self-induced guilt about being away for two nights, from the farm and from the fam. and I was worried that I would be derbied-out before it was over.
While I WAS glad to see that big bridge on Sunday night, I had such an amazing experience that I am still overwhelmed with how much more I love this sport.

One of my favorite moments of the whole weekend was actually completely unexpected, when I was putting in my time as an NSO (non-skating official) (players were required to be NSO's for other teams' games, since many are needed to run a bout).  I was standing there, clipboard in hand in the centre of the track, keeping a record of penalties (who got 'em, minor/major, what for, which jam, etc.) and it was the first time that I got to appreciate the game from an 'observer-only' perspective. I didn't have time to watch the game and evaluate the play/players and consider strategy, etc. and my focus was on the referees and other NSO's.  It occured to me just how collaborative a sport this truly is.  The refs were skating around, doing their absolute best to keep the game fair and safe and communicated so effectively and respectively to everyone involved.  The NSO's were focused and serious, doing their very best to do their task as well as they possibly could.  There were moments of confusion and questions, but in the end, everyone worked it out together and a resolution was reached through communication and thoughtful sharing of information.

I am not a touchy feel person and I often get frustrated when time is eaten up discussing HOW we're going to discuss something.  I often roll my eyes at how serious a group of adults can get when it comes down to the details of something.  But it seems the word 'collaborative' is often applied to roller derby and I have to say that this weekend, that word really rang true for me.
It is a group of women who put aside all of their alpha-tendancies and embrace their own abilities to be a rough and tumble female as part of a larger group of the same.  Whether it is within sight of your everyday self, or whether your alter ego is truly very alter to who you usually are, roller derby is a venue of creative, active collaboration and positive-energy-for-a-single-purpose personified.  It is a labour of love for everyone involved.  Truly.  I am so influenced by things that were said and done this weekend that there is a chunk of my heart, wrapped up in sparkly tights, smelling to high heaven, sitting in my derby bag, revelling in the high of being a part of it all and it will be there LONG after the helmet stickers wear off and the skates are hung up.

On a more personal note, I re-injured my shoulder in our first game, but our team won the other three games and I have some serious notes of admiration for my teammates.  I honestly feel strongly that every single one of them brought their VERY top game to the track and played their absolute best. I feel especially strongly about Annie Biotix, who I think finally has the confidence that she deserved to have all along.  It was as if she burst out of a firework and saw herself for just how awesome she truly is and met that potential head-on.  DiSciple always brings her A-game and is one of the strongest (yes, I'm using that language) players we have, but needs to start feeding her puppy better so that she can see herself as amazing as the rest of us see her.  It was especially pleasing to me to have Elle Liberator running lines on the bench, being that calming, levelled energy in the frenzied moments of a game.  An eye for keeping it fair and balanced, but also effective is a talent not many are blessed with. Viv the Shiv knows her stuff and it is no surprise to me that she saw that in TARDIS Queen as well.  I could watch Bonnie N' Collide block jammers forever.  She's a killer jammer, but there is something about the focus and determination of her blocking that really catches my admiration.  The Most Unexpected Effer Award goes to Hell'N' Hurtley who is the most consistent tiny tank on the track.   CommandOH earned the respect of the top coaches in North America and every bit of that is hard-earned and well deserved.   My personal MVP award went to Mosie O'Pummel who completely blew my mind EVERY game with her unfailing ability to hold a jammer back, lead a strong-willed line and keep an eye on the entire track and penalty box.  She is my aspiration and a true derby mentor. (It didn't hurt that she scored her sister wives the executive suite to boot....:) I had a brief, tearful moment of self-pity in the middle of the last game, when I realized that I had only played the one game and desperately wanted on the track to play, so my last acknowledgement goes to Foxxy Velocity who is one of the most competitive people I know and who, despite having injured herself in training and was forced to sit out of the games, remained that unwavering pillar of support and positive energy in every game.  She had a hug and well-wish for every single player, every game, and never once brought her dissapointment or frustration to the team.  Here's to healing vibes and amazing physio skills.


The love-in is nearly over, but I had to share my appreciation for a sport that incorporates every body shape, athletic ability, attitude and brings together women from EVERY background, who would never have otherwise met, let alone, shared food, or a bed or deodorant or tears or laughter.  Here's to a sport of social, emotional and physical collaboration.

Thanks to my family for being so encouraging of my derby obsession and for being so willing to let Vandana Shove'her spirit Sally away to the magic world of oval tracks and booty shorts.  And thanks to Red Rock N Roller Derby for making this lowly farm girl feel welcome enough to lace up to start with.