Anyone who knows me, knows that I have always struggled with science and math. Just saying the words 'chemistry' and 'calculus' make me nauseous.  Even if you don't know me, you might make the assumption that my Bachelor of English degree is an indicator of a stronger right brain than left.  (You're right.)
I've realized that it's too easy to surround oneself with their own opinions.  I mean, in this social media world where I can link to anyone, anywhere, I naturally lean towards anti-GMO websites or organic organizations on Twitter.  I want to stay on top of the headlines that interest me and staying within my interests is the best way to do that right?  But recently I've discovered that it's even more interesting to stay on top of headlines that interest me by following those who I disagree with most.  It's irritating and causes me to lose sleep thinking about it, but it's kind of refreshing in a maddening sort of way to hear a GMO debate from the other side and listen to the commentators put down organics.  After months of reading the Tweets and comments, I have noticed a recurring trend.  Firstly, that organic producers and their advocates tend to dismissed as uneducated and always naive.  Secondly, that the reason organic producers are naive is because they 'don't understand the science', or 'don't accept the science'.  Science keeps coming up as the be-all, end-all of everything everyone needs to know about the benefits of GMOs.  As if there is no discussion to be had because clearly, science has laid out the answers and any opposition is simply not worthy of hearing, because it's not based on science.
Here's the trouble:
Science is not infallible.  From beginning to end, it is interpreted, executed, reported and utilized in specific ways to reach specific means.  I could point to the 'science' that promoted DDT or asbestos as life-savers and the next best thing to make life easier and HEALTHIER.  Or I could point to the 'science' that led and continues to lead many parents to not vaccinate their kids based on a still controversial study that linked autism with a specific vaccine. But since we're talking about GMO science, let's stick with that.
Firstly, it's well known and documented that chemical companies are some of the biggest sponsors of several respected universities who invest significant resources into 'scientific studies' regarding all kinds of things.  Even if the science is done perfectly, following pristine methods, the results can be tucked away if not agreeable.
But often the methods aren't pristine.  Take a simple trial on PEI, for example.  Researchers who work at a federal research facility invest their time and our resources into 'organic trials', but plant the trials in land that was potentially treated conventionally as recently as last year.  Even if the trials are treated organic, to the letter, for the year of the trial, it's not an accurate representation of what organic soil is capable of.  If it's a variety trial for example, maybe a variety has been bred for use in a conventional system, planting corn for 5 years in a row (ugh....but entirely possible), or maybe it's an organic variety that when planted in poorly managed soil does poorly because it has been bred for more organic matter, or lots of mycorhizzae or whatever it is that is unique to it's make-up.  That's just one TINY example of how what could possibly be reported as an 'organic variety trial study' could be wrong and terrible from the start.
There is an interesting story of a study done that questioned the benefits of GMOs and in the end was critical.  It was published in scientific circles and then the New York Times caught wind of it and planned to put it their weekend paper.  In these days of suffering newspaper sales, their biggest advertiser, the chemical company responsible for the product questioned in the study, threatened to pull all of their advertising money if it was published.  That weekend paper did not publish the study and instead, had a full page ad for the company in question.
So, even if the science is right, how it's reported or distributed can be often and easily skewed.

The moral of the story is, I'm tired of "science" being shoved in my face as the answer to the world's problems.  It's important, yes. I recognize that.  But it's as fallible as the observations a farmer can make with their eyes on a day to day or year to year basis, and even more susceptible to skewing.

Finally, can we all just stop referencing the now ancient notion that GMOs will lead to farmers using less pesticides?  If science hasn't proven this, the bottom lines and margins of chemical companies prove otherwise.  So for all the other reasons that GMOs are supposedly going to save the world, let's agree to leave that bullshit where it belongs- in the defunct pile.

For those of you who made it this far and have been asking for pictures, here's a few that I finally cleaned off my camera today. 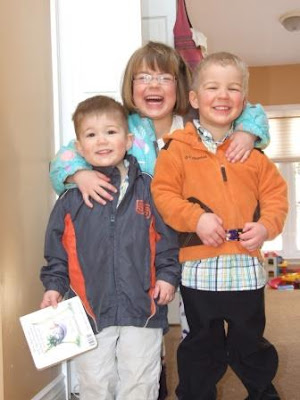 The trio on Easter morning in their Sunday best, full of chocolate and ready to sit quietly in church. bahahah! 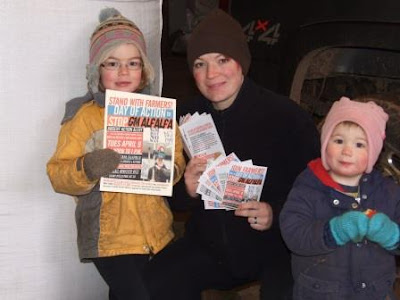 Me indoctrinating Lucy with anti-GM alfalfa propaganda on April 9th, the national Day of Action, which happened to coincide with a highschool culinary class tour of the farm. 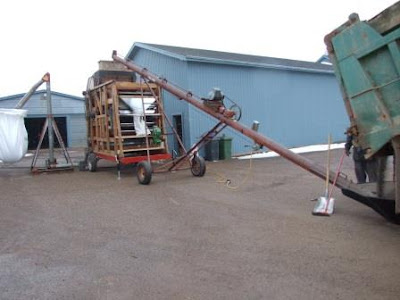 This is the beast, otherwise known as Mark's preoccupation for the winter.  A fancy shaker cleaner that does a pretty great job, but will do an even better job when it gets a cyclone that keeps the light chaff in check. 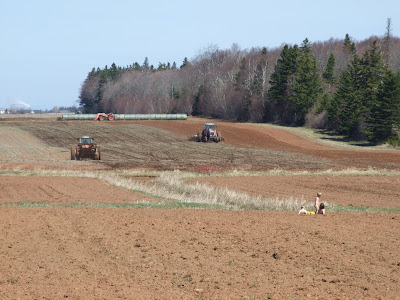 This is a scene from today- May 1st, 2013.  I looked out to the sandbox to find no kids.  Further investigation found them in a much bigger sandbox, a freshly tilled field, Tonka's working at full bore, manure spreader and discs in the background just to help set the tone of 'serious work'.  Oh, and completely naked too of course.

It's way too dry here.  Drier than ever, let alone for spring.  But I admit that today's sun was pretty spectacular.  So I won't complain either way, but if I was a good farmer's wife, I'd say WE NEED RAIN!

Hope this finds you digging in some sort of dirt.