Digging Our Heels Into Hardened Soil

Ya know how when Trump first garnered attention as a wild card in the various races to become President and everyone thought he might tone it down once at the top? And then once he was president, with each passing day, we continued to be surprised, and then slowly not at all surprised that he continued to act a bit unhinged and certainly unlike any politician seen or heard before? And next thing we knew, nothing could surprise us and we hardly lifted our heads at the latest headlines, hardly gave his antics much attention at all?

I'm worried I may have arrived at that point with genetic science in agricultural crops. I'm almost not even surprised when even the craziest research has been funded and the latest 'solution' developed, suddenly staring at me from my computer screen, from a CBC Quirks & Quarks article no less.

Go on. It's not a terribly long article, you've got time to give it a quick perusal. (If you REALLY don't, the Cole's Notes is that plants do not do well in compacted soil -surprise!- and scientists have identified one reason this might be; ethylene, which does not diffuse through compacted soil. Fear not young reader, genetic modification is here and will create plants who ignore the ethylene and literally punch through the hard soil.) 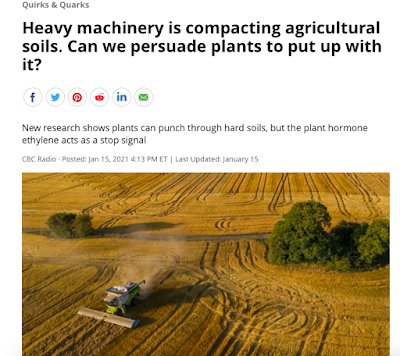 I almost, for a second, thought it was a joke. Perhaps there's now The Manatee or The Beaverton for farming?  No, the linked scientific journal would suggest otherwise.
I'm finding it difficult to form my thoughts coherently around this topic and yet I've been sitting with it for several days now. Rather than bore you with a long article outlining my dismay, here's some bullet points instead.
I've mentioned before that many years ago I had seriously considered creating a blog entirely about the silliness of various "solutions" created in agriculture that are in fact just treatments for the symptom. This could be the textbook example to beat all examples. Rather than treating the problem of compaction (huge equipment, short rotations, lack of cover crops, lack of organic matter, erosion, a focus on building soil and encouraging soil biology, etc. etc.), let's turn our attention to how we can fix the symptom (plants struggling to emerge in compacted soil).
Can you hear that?
It's my head banging against the wall.
Please agriculture. Read the room. We need to move in another direction, not dig in our heels.
Sincerely,
S.