The Chicken That Keeps on Giving 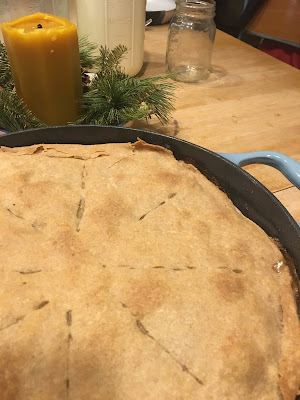 On my Instagram this week, I shared how I get the most out of a chicken, starting with using the breasts for fajita night, simmering the rest for stock and stripping the meat from the bones for other dishes. I ended up making noodle soup and chicken pot pie with the rest of it. It ended up feeding 22 people!!!  I had a bunch of requests for the recipe for the pot pie so I thought I'd put the recipe here.

I should include a note that I don't really follow exact amounts very often. I'm a bit of a 'feel it out as you go' kinda gal. So forgive my wishy washy instructions. You Culinary A-Types won't enjoy the following.

It would be helpful to watch this video of me cutting up a chicken to start with. This is how you get the most out of a whole bird, 100%.  Once I had it pieced up, I separated the breasts and tenders, and then put the rest on to simmer in the dutch oven for a few hours with a whole onion and celery. Once it was cooled, I pulled all the meat off the bones and strained the stock. I stored them both in the fridge until I was ready to use it.

Peel and dice carrots and potatoes. Put em on to boil until tender-crisp.
Meanwhile, fry diced onions and celery in lots of butter, in a heavy pot. Probably like a 1/4 cup-ish. You deserve it.
Fry until softened and smelling irresistible. Add some seasoning of your choice. A generic "poultry seasoning" will do the trick, or summer savory, or thyme and sage, etc.
If it seems like it needs more butter now, go for it. There should be some butter that hasn't been absorbed by the veggies.
Add the equivalent amount of flour. You'll know it's the right amount if its fully absorbed by the butter but not looking too dry. Whisk around while it cooks through and starts to smell a bit nutty.
Whisk in some of the stock until thickened, adding more until you've got lots of thick, flavourful stock.
Stir in your chicken. I had about 1.5 - 2cups of chicken, but any reasonable amount will do.
Gauge how much stock you've got. You don't want it too wet, or you'll end up with chowder, but you want everything coated. Adjust accordingly. If you need more stock, this time add milk/cream.
Now add the potatoes and carrots that you boiled. Stir as little as needed, to get everything incorporated.
Last thing to add is frozen peas. I add them right at the end, so they cool things off and stop everything from getting too mushy. They'll cook once they get to the oven, and hopefully stay a nice bright green.
So now, if the ratios of food to cream seem ok, I set aside and get busy on my crust. 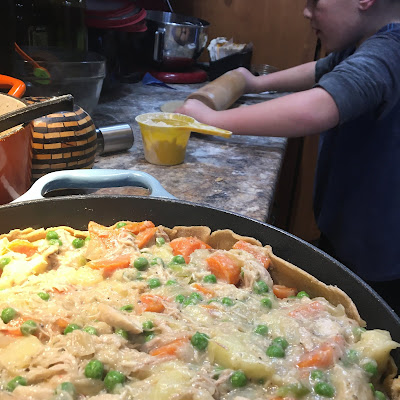 If this is for a sweet pie, add a tablespoon of sugar. Otherwise, omit.
This is not some super flaky superhero pie crust. It ain't gonna win ya no blue ribbon at the county fair, but it'll do in a pinch and is perfect for simple pot pies, quiches, etc.
1 1/3 cup flour (don't kill yourself trying to use too much whole wheat in this. You'll just be annoyed.)
1/4 tsp salt
1/2 cup cold butter (cubed, or frozen and shredded) 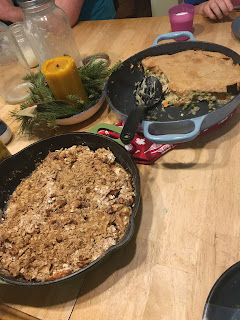 3-4 tbsp ice water (I find with our flour it takes a bit more water, but don't get too excited about it. Just add a bit at a time until your dough forms a nice ball.)
It says to chill in the fridge, but I almost never leave myself enough time for that, so I just get rolling. This recipe gives me enough for a this bottom and top crust in my large dutch oven brasier pan.
My mom always makes her pie crust in her food processor, and she makes the nicest pie crusts known to humankind (and her recipe is from the Tenderflake box), but I do mine in a bowl, by hand and it turns out fine. Getting that butter mixed in nicely is the ticket.
Anyway, toss a bottom crust in your dish, add the chicken mixture and throw the top crust on. I was making apple crisp at the same time, so I had the oven at 350 and kept it in there until golden brown (probably 30-40mins?), but otherwise, might have turned it up to 400 for less time. *shrugs*, who knows?
Thanks for coming to my terrible-at-recipes TedTalk. Follow me for more difficult to follow culinary instructions. *eye roll*.