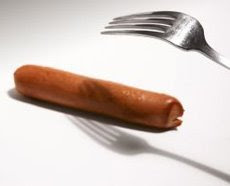 A couple weeks ago I was sitting in a doctors office in Summerside, waiting for the instructions of the latest test I was to undergo for standard pregnancy stuff. As is almost always the case while waiting anywhere in Summerside, the woman beside me struck up some friendly conversation about the weather. While we chatted, the nurse came along with a radioactive looking orange drink for me to test for gestational diabetes. I had tasted it before, but forgotten just how sickly sweet it is, so my first sip revealed a little grimace. The woman who was watching with poorly concealed curiosity asked,
"Oh my, is it terrible?"
"No no, it's not bad, just really sweet."

I could tell she wanted to know what it was for, but was too polite to come right out and ask, so I saved her the trouble and just told her. This is usually the point that any woman who has ever had a child comes out with all her pregnancy experiences, ups and downs of child-rearing and joys of grandchildren. This lady however, did not mention her own children nor grandchildren, but had the power of observation clearly on her side. Upon hearing I was pregnant, she looked me up and down and said with conviction,
"You know, they say you shouldn't sit with your legs crossed when you're pregnant."
"Oh? Well, I'm doomed to have varicose veins anyway, it's in my genes." Thinking that must be the reason for this wives tale of advice. I was wrong.
"No, it's because with your legs crossed, the baby might not be getting enough blood."
"Oh. Right. Well, there's a lot of things I shouldn't be doing I guess. I'm not supposed to eat weiners either, because they're processed meat, but I haven't really given that up either."

A look of incredulous disbelief went over her face and she sat in heavy silence. I was surprised at the sudden silence after the chatter, but enjoyed the opportunity to sink the rest of the orangey syrupy drink and get out of there, before I was lucky enough to get some more helpful advice.
As I finally getting to the bottom on the bottle, a few minutes after our last interaction about the weiners, she finally turns to me, obviously distressed and says,
"Wait a second, if you can't eat weiners...what DO you eat?"

Now it was my turn to be speechless, while I ran through the possibilities of what she had been thinking for the past few minutes. Had she been sitting there trying to come up with alternatives to weiners and was unable to do so? "Hmm..I guess she could have a hot dog...oh NO, that's a weiner! Well, what about a pogo? Oh oh, weiner!!! Well at least there's always beans and....WEINERS!!! WHAT DOES SHE EAT?"

I think I came up with some vague response, but thankfully I was done the orange drink and was able to get out before I burst into the biggest giggle I'd had in a long time.

So if any of you out there think that pregnancy is no big deal, that it's easier than it looks, just remember that you can't eat weiners, then try to tell me we're the weaker sex.