One of the challenges that comes with farming in a relatively new industry, especially in an area that has perfected conventional agriculture for hundreds of years is knowing what is a new, viable market and what is a trend or just a bad idea. Mark and I sort of have our roles pretty well defined in this discussion everytime in which he pitches a new, seemingly crazy idea and I shoot it down with lots of 'logic' and 'why-isn't-anyone-else-doing-it-if-it's-so-fantastic?' We continue in this fashion until Mark usually just tries a small plot or experiment of whatever it is, to try and prove me wrong, or I get the opportunity when it fails to say, "told ya so".
Not this time. 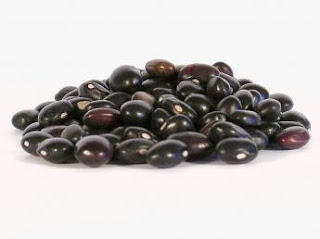 A few years ago, when we began growing soybeans and were getting our names out there as reliable producers we were approached by a lady from Charlottetown who had been told by her homeopathic doctor that black soybeans were good for the body and did we have any? We had never heard of them, nor had anyone else we talked to. I would have left it at that, thinking there was probably a reason that no one was growing them and it had something to do with the fact that this lady had a homeopathic doctor at all. But Mark, the visionary, sourced a pound or so of seed and the next year we had a successful plot of organic black soybeans. "Successful" being the operative word, because I continued to view them as a waste of time and money. That fall, there was no one breaking down our door for them, so I figured that proved me right.
Now, in February, 2009, after Mark continuing to grow them out, year after year, we've got markets right under our noses, just begging for black soybeans, in all forms. All it took was one trip to the Summerside Farmers Market, where Mark left a sample of the beans with a Japanese Canadian woman selling Japanese food. She called a few days later and wanted 50 lbs. claiming they were amazing and in talking to her mother back in Japan, she was so excited to have a source of such delicious, quality beans that she could only ever source before from home, in Japan.

So what do you do with black soybeans? Well, turns out they make amazing edamame (pronounced ed-a-MAIM-ee), which if you don't know, is a very popular sort of appetizer in Asia and increasingly, here in North America. Basically you pick the beans when the pods are still green, but plump and full, steam them or boil them and then let your guests just pop the hot beans out of the pods into thier mouths. The pods are of course, thick and unpalatable, so not edible, but apparently the beans are fantastic. Mark's sister, Martha, spends half of the year in various part of Asia, and often tries to introduce our tired PEI palates to new things, one of which was edamame a couple summers ago. I wasn't overly impressed as they just tasted to me like eating hot, steamed lima beans, plain. Pretty tasteless and boring. 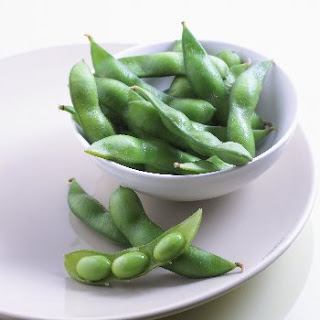 However, in our research about edamame, black soybeans, although much harder to source, have a much different and much richer/sweeter flavour. What's odd is that black soybeans are still just green at the edamame stage, so they look the same as regular green soybeans. Tricky.

Anyway, Tomoko, the Japanese woman from the market used the mature, black beans for all kinds of things and apparently the dishes were a big hit with everyone who tried them. So she wants them in every form, mature or not.
And since it's such a niche market at this point, we're able to get a premium for a quality product. So now it's Mark's turn to say, "told ya so". Lucky for me however, he's too nice to do that.

ps. we're open to any advice on harvesting edamame, since we've never done it before, but it's looking like a worthwhile, albeit laborious market to hit.
Posted by Sally at 10:43 AM