The first lambs have arrived here on the farm, so it's a sure sign that, despite the frigid temperatures and gusty winds, spring's warmth is in the future, somewhere, someday soon! 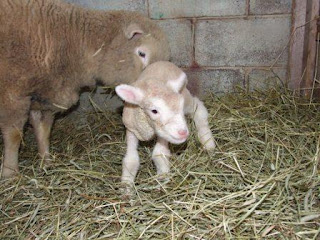 All in all, so far things have gone really well. Late Thursday night my old, rough looking ewe, 'Garlie' kicked things off with a tiny little ram lamb (above). She's the only ewe with a name and it's because a couple months ago she was looking really poor so I figured she was probably getting a worm build up (sheep carry a certain amount of parasites at all times, and once in a while they can get to a point which is detrimental to their health. Conventional farms de-worm their flocks on a regular, usually bi-annual basis, while organic farms must rely on a strict regime of pasture rotation and prevention more than reaction.) So I decided to give her and her colleagues some raw garlic, chopped up and mixed in with their soybean meal. What was funny though was that she LOVED the garlic and for days afterwards would come up to me looking for more, and the rest of the flock wouldn't touch it, or the 'contaminated' soybean meal. It was almost like she had a deficiency that needed filled. Anyway, she's also a bit odd looking, with a lot more wool on her face than the rest, which is probably the only reason she has a name; because I can tell her apart from the rest.

SO, she had her tiny little ram lamb, no trouble and the next day one of my first time lambers proceeded to struggle through the birth of her ewe lamb. She ended up doing fine, but since I was inexperienced with first timers, the struggle and noises threw me for a loop and I spent the whole, seemingly long birth worried that I was going to have to intervene. Thankfully, the wisdom, experience and advice of my parents held me off and things were A-Ok. It always takes the first few ewes to remind me that mother nature is a MUCH better nurse than I'll ever be.
Then today, 'Big Mama' had a pair of twins, a ram and a ewe, who are big, healthy and cute as can be.

So all in all, things are great. My three lambing pens are full, so I hope there's a day or so before any more arrive, so I can get all the eartagging and paperwork done on the ones already born before I boot them out to the bigger flock. That said, it would be nice to have most of them born before the end of this coming week when Mark goes to the ACORN conference in Truro for a few days.

Three down, nine to go. Wish me luck! (...and sufficient sleep to prevent me losing my mind...)