Guess What This Is!

So, challenge of the day, for all my faithful readers out there; What is the stuff in these pictures and what do we do with it? 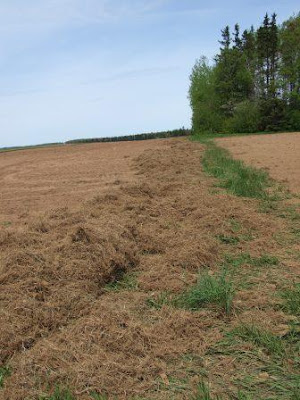 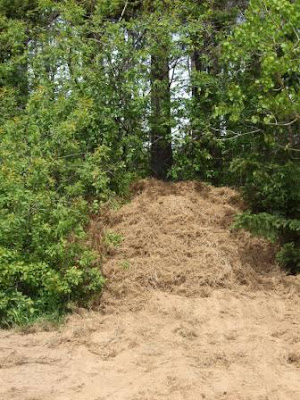 Well, it's couch grass (pronounced 'cooch grass') and chances are you have it in your garden or somewhere around you. It's a persistent and wily little beast and if Barnyard Organics ever collapses, it will be due to this arch nemesis of a plant. Whenever we're asked about the challenges of organic farming and our operation in particular, 'couch grass' comes up as an answer pretty close to the top, along with time management and paying the bills.
It spreads by rhizomes under the ground and is virtually invincible. Like some mythical beast, chopping it up only causes it to spread and creates yet new plants. Even the tiniest little piece of rhizome (or root) can take root and sprout big healthy plants in a very short time. Mark has dug up four foot rhizomes in the past. The other thing is that the root is VERY strong. It can grow right through a potato with ease. It laughs in the face of obstruction.
SO, what is an organic farmer to do. A quick shot of Roundup would take care of it pretty easily, but that's the name of our game, so we've had to be inventive. Hence, the photos above.

We knew that breaking it up would only make it worse and tillage is a dangerous method to try to deal with this weed, so we considered the possibility and methods of removing it from the field completely. Turns out a finger weeder is a multipurpose tool afterall. 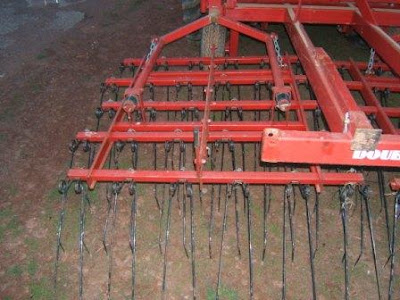 First, the field is harrowed and broken up and then left for a couple days to allow the rhizomes to dry up in the sun. Then we run the finger weeder through it and let the tines drag as much as they can to a winrow. That's what you're seeing in the first picture above. While it's VERY satisfying to see the big piles of couch grass in the woods, there's still quite a bit in the field and it's something we really need to keep on top of at all times. Just a little bit of pressure to keep us on our toes, which isn't a bad thing.
We'll let you know how the couch is in this field at the end of the season, since it made for a crop loss last year, it was so thick.

In other news we got our first batch of chicks yesterday and so far so good. 100 broilers, 25 layers.
Must run, there's a coon on the loose on the farm (leaving tell tale signs around) and Mark is itching to go a-huntin' before he finds all the grain he could get into. Ah, what a way to spend a beautiful May night.