Illicit activity down on the farm 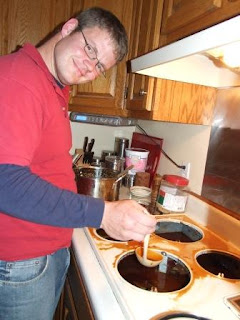 Recreation at Barnyard Organics comes in many forms. I believe the last line of my last entry mentions just one of those recreational activities (coon hunting). That story later. First, my darling husband is an innovative man and one after my own heart in that he would rather make his own recreational beverages than buy them.
This afternoon, he gave me a little treat by sending me off to town by myself to make a couple quick stops, leaving him home with the kids and supper to make. Well, multitasking is not his forte and when I came in the door he said, "Maybe you should go away and come back in an hour." When I went to investigate, this is the scene I came upon.
He had a pot of 6 cups of water, 6 kg of dark brown sugar and one litre of molasses boiling away as he cooked steaks on the grill. Allegedly, he was only gone for a moment, but when he returned, this is what he came upon ---------->
There was sticky, goopy, candy-like goo, 1/4 inch thick, UNDER the elements on the stove, let alone the mess on top! I had a great giggle as he struggled away to clean. I will say however, that my stove has NEVER been cleaner now that he's done! He's predicting this will be his best batch of shine ever. 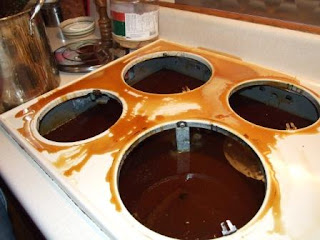 As for our raccoon adventure, we were unsuccessful the other night, but the following morning when I was on my 5 am walk, our dog Rinnie was terribly excited about one of the trees in the farmyard. So I looked up and to my delight there were two big lumps just hanging out enjoying the sunrise.
Not for long.
I called Mark and thankfully Wilson hadn't woken up yet, so the great hunter arrived in haste and quickly demolished the masked bandits. I think they have been enjoying our grain for a while, they were fat as seals! It was a very successful day and it wasn't even 6 am yet!

So far, the new chicks are all surviving and doing well. It hasn't been the most chick-friendly weather here, with bitter winds from time to time, but the sun does make the occasional appearance, so the planting is getting done. Only the soybeans left and we'll take a little break before those go in, so right on schedule!

Hope all is well with you, faithful readers! Don't hold anything in this entry against us.