Whew, I just booted Mark off the computer saying that I needed it to do bookwork for the farm while the kids were asleep, but now that I'm on here I find myself drawn to do an entry here. It's far more fun than filing invoices and receipts! Plus, this is for the good of the farm as well isn't it!?

Life rolls along here steady and strong as the weather is giving us a special treat today of 24 degrees! There's a fair wind here (if there wasn't, I would wonder where I was), but it's a warm one and I'm not complaining. Lucy and I spent the morning in our sandbox and flowerbeds, respectively, while Wilson alternated between sleep, eat and cry. So all is well on the homefront. 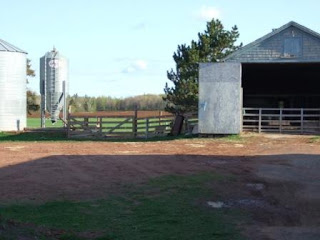 The new corral built off the barn to give them more space and access to outdoors.

On the farm front things are picking up. We finally got the sheep out to pasture and boy were they excited! Here's some pictures of them heading out on the second day (after they figured out how it worked).
First here's the flock waiting for me to open the gate (which is really just two coiled strands of electric fence that you can't see). 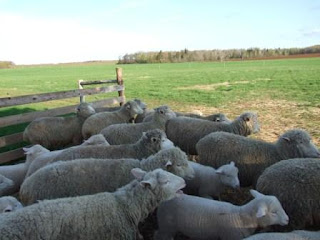 Then, they're off! And Lucy laughing as they run at full speed. 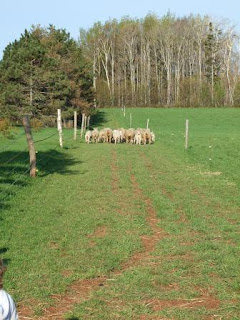 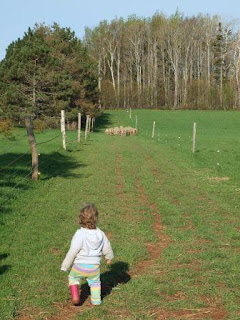 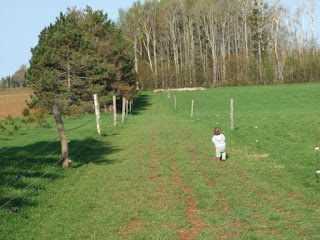 Just a quick explanation of our pasturing system; because we can't use the usual de-worming meds under organic production we have to rely on a system of prevention and according to the books and research, the parasites require a host at a specific time in their life cycle and if the sheep are not on the pasture during that time, the parasites die off eventually. So for us, we've developed a system where we divide the pasture up into temporary sections that the sheep graze for 7 days at a time, and then they're moved to the next one, never to return to that first section again that year. At least that's the ideal plan. We ran out of pasture last year and they returned to a couple sections, but I think it was ok. Anyway, in the pictures you can see the sheep heading up the furthest paddock, the first one this year. It has a little bit of woods in it as well so that should make the early grass paddock last a little longer. Fingers crossed at least, since I think they've got it pretty well cleaned off and it's only been a couple days!

Besides the sheep, Mark is hoping to get planting today or tomorrow. So far he's gotten across all the land at least once and is now doing some second passes with his new toy. 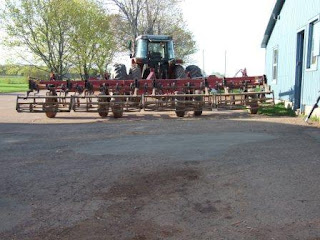 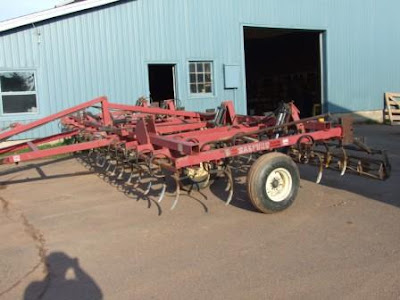 As I predicted, we have a new set of harrows, and are less a res-till, but he's happy, so we're all happy. Anyway, apparently it's doing a great job of prepping the land and is a lot wider than the res-till was, so we're covering a lot of ground a lot faster.
I think at this moment he's spreading some boron on some of the land, which is not a common thing to do, evidenced by the response of the fertilizer companies I called to get prices.

Oops, I'm late for Wilson's three week appointment, will have to finish this up later!