Evidently, Mark is feeling a bit left out of the blog world. Or maybe, misrepresented (although I think he is enjoying the previous post in which I praised his handyman skills) due to there being very little about the farm these days. I think he is worried that the world will begin to think he is just puttering around the house, leaving the farm to fend for itself. Yesterday he took my camera with him 'to work' and brought home some evidence he wanted me to put up for you to see. 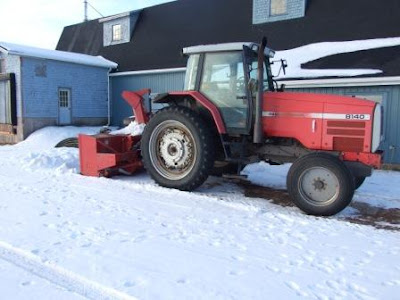 "So people can see what I do...this time of year."
So here's the beautiful 8140 and her matching red snow blower. The only thing missing is Mark inside, heater on high and music blaring. He's got about 25-30 driveways, but hasn't done much blowing this year, yet. Or maybe I should leave that last line out. He's busy on the farm. 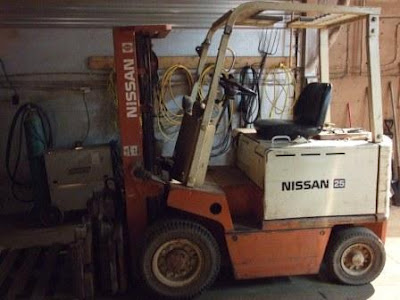 "Well, the forklift is the next project. Gotta rebuild it."
I'm not totally clear on what this means, although a guard was knocked off the front a little while back and has to be re-welded. So, that's the 'next project'.
Ok, I'm being a bit cynical here. Mark is not one to sit idle, so I know he's always doing something, I just thought it was hilarious when he came home with these pictures of "what I do." 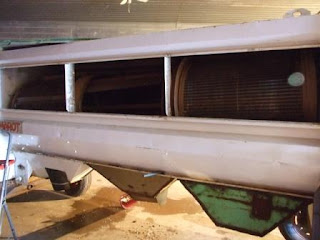 One of the projects that he has been working on is interesting. Our big rotary cleaner deals with grain in three sections, each screen getting progressively smaller until only the desired seed is left to come out the end. Sometimes there is too much dust to start with and the end product is not as clean as we would like. Mark came up with what he thinks is a perfect solution. 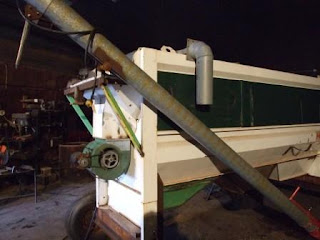 He attached a fan to the front, below where the seed initially enters the cleaner. It blows the first round of dust out of the way, over the top of the cleaner and out the pipe you can see sticking over the side. This hopefully means that the screens in the main part of the cleaner can do that much better of a job, with some of the dirt removed before it even goes anywhere else. Initial tests look promising.
Finally, in other news, we had lamb dish #2 of 2010 last night and it was another success. I actually really enjoyed it. I followed my sister, April's advice (she is the smart one of the family)and used mint jelly as the flavour base. Mark's sister, Sarah, had coincidentally, given me a jar of homemade mint jelly for Christmas so I put it to good use. I made a reduction of red wine vinegar, mint jelly and rosemary for a sauce and it was sooo good. I probably cooked it too much for gourmet chefs, but I though it was perfectly done. Five lamb chops don't go very far however, with a meat loving child, and a viking of a husband, so next time I will have more faith and cook a couple more. See? Next time!! This may be the first resolution I keep! 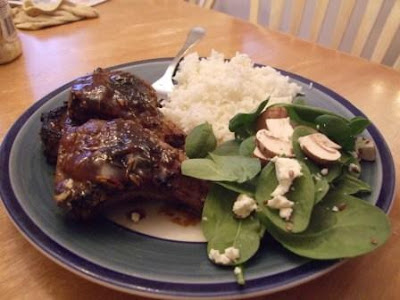 Then for dessert, also to honour my smartest sibling, I made snow pudding. After one botched batch down the sink and two frantic phone calls to my mother, I managed to pull off one my favorite desserts. I'm not sure when I'll learn that the recipes my mom makes sound the easiest (Oh, ya just throw that in there, when it looks like snot, throw it in that bowl, mix it if you want, cook the other stuff, not too much, but hurry up....etc. etc.) are usually the hardest. Anyway, it was delicious and a nice lowfat/no fat comfort food dessert. 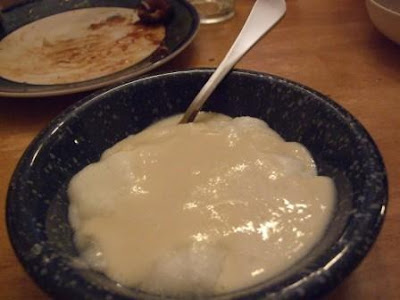 Speaking of recipes, I smell my banana bread, better get that outta the oven.