Home of the Handyman! 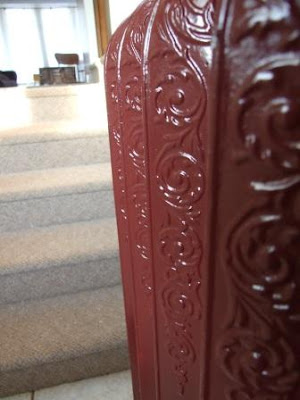 Before we got married, but when things were serious, Mark once told me that he would love spend his life making me happy. I'm sure there are those of you out there (ahem..West Branch..) laughing at such a seemingly looming/impossible cause, but I will have you know that he has done a lovely job thus far and I don't think he's too fatigued about it (as in, I am not THAT hard to keep happy.) Anyway, I think one of the things he takes great pride in, is not only completing the things I ask for, but doing things I never knew I even wanted. An example of this was that a little while ago, while in Charlotteown, we went into a fancy kids store that carries VERY overpriced and sometimes useless items that a lot of people think are necessities to raising children properly. In the cloth diaper section there was a little hose/sprayer advertised for cleaning soiled cloth diapers, but I saw the price tag before I saw anything else, so I skipped over it and kept on browsing, never letting myself wonder if it was something I might ever want.
Mark, on the other hand, evidently took more notice of it and a few days later, I had this attached to the side of my toilet: 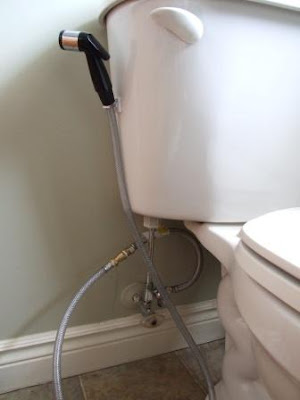 No, it is not a hillbilly bidet, although you could be forgiven for thinking so. No, wait, you couldn't. Anyway, it's a great little rig that is just perfect for cleaning cloth diapers! I had never heard of one before, but have since talked to at least one other person with one, for that very purpose. It has really good pressure and does a great job. I am thankful for my handyman and his great ideas, and although he may claim this is for me, I believe it is he who leaves the cloth diapers in the toilet for me rinse out later. No excuses now!
We've been using cloth diapers almost exclusively now for a little while (except at night) and this simple little hose will make it that much easier.
The other great addition to our house this week has been our 'new' radiator. Our entryway, although bright and very useful has been an icebox since we moved in. We added extra insulation and tried a few different tactics, but it remained the coldest part of the house, thus making the kitchen and living room cold too.
Things have changed. 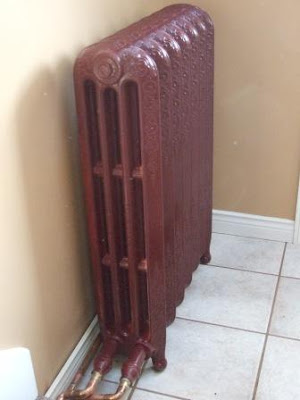 This little beauty was being stored in the barn over at the farm and was earmarked for Mark's sister, but she doesn't have room in her cozy house, so we worked out a deal that if she ever does find room, we'll find her another rad. In the meantime, Mark stripped (the 6 layers of paint), sandblasted, primed, painted and plumbed it to a whole new life! It is cozy and warm in our entryway now and we don't have any wet mittens at chore time for the first time in 3 years!
As one of our egg customers said when she came in and found out that Mark had 'done it all', "There's not many people around that could do all that themselves ya know!"
She's right.
And I appreciate it all! (I may or may not be using this blog to show my appreciation and encouragement for more such projects! haha!)
Nothing new on the farm front. We started a cycle of feeding probiotics to the ewes in preparation for lambing. Mark calls it 'dried yogurt' and really it just looks like fine sawdust, but at 3 grams a day/ewe it's tricky stuff to feed. I do think I see a difference in them though, after we feed it for a while. It's not cheap though, so I plan to save some to feed to the lambs once they start eating grain. It basically serves to 'get the gut going' and get all the good bacterias doing what they do best. If I can't keep the worms away with parasiticides, I can at least give my sheep the best chance of fighting the symptoms with optimum health. The woman we bought it from says that she only feeds it when she sees an animal doing poorly and it seems to pick them right up. So far, I've only used it around lambing and I like the extra assurance of it.
Anyway, time to wake sleeping babes so they will sleep tonight. (I know, I know, conventional wisdom says to never wake a sleeping kid...seems nothing we do is conventional around here.)