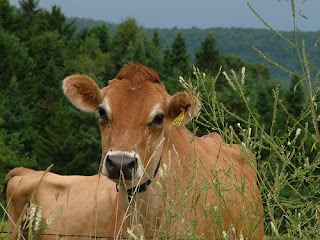 I grew up always having a milk cow on the farm and for some reason, in my adolescence (not a time known for legitimate hatred) I decided to hate the thick, creamy, sometimes grassy tasting milk that was always in abundance in our fridge. I managed to hone in on the grassy tasting part (which was really only for a small part of the year when the clover was in its prime) and avoid it at all costs. This milk-hate followed me to university where I didn't drink much milk there either, despite there being ZERO grassiness, creaminess or tastiness. It has only been in the last few years, since buying it for my seemingly chronically calcium deficient husband and for the kids, that I have developed a real taste for it. If it weren't so damned expensive, we would drink a lot more. It kills me to hear things like, "MARK! One glass is enough!" come out of my mouth, but when milk takes up a very significant portion of our grocery bill, I can't help myself.
The former potato farmer-turned grain farmer has been bothering me since...well very early on, to get a milk cow. I initially laughed at him, chalking it up to livestock ignorance on his part. But either, he's wearing me down, or everything is coming together to convince me that this is actually a good idea. There are two factors left that are holding me back;
1)too much milk. We would need to share with a family or two to be able to use it all. Then, how do you arrange a trade/payment for milk, etc.
2) being REALLY tied to the farm. Mark's dad is so good to us to feed the sheep or chickens when I want to make a trip home to NB . With the kids now, we usually only go for a night, and only once in a while, but with a milk cow that isn't a possibility. So, if the family we shared with, would be willing to take the milking on while we're gone, that might solve things.

I've been reading a book by one of my favorite authors called, "Animal, Vegetable, Miracle" and although it's just a reiteration of most of the things I already knew about industrial agriculture, it's really motivating me to actually do something about it. Barbara Kingsolver isn't an activist or an extremist in this book, she just presents the facts and explains the decisions that she and her family made as a result of those 'facts'.
Anyway, I would highly recommend it. Even for those familiar with producing their own food, because although it initially sounds very food 101, it's really far more indepth and educating for anyone. I'll leave you with my favorite quotation so far:
"Food is the rare moral arena in which the ethical choice is most likely the one to make you groan with pleasure. Why resist that?"

Here's to personal food security (and endless amounts of heavy cream...haha). I hope this finds you healthy and well.