Big Night in the Bernard House! 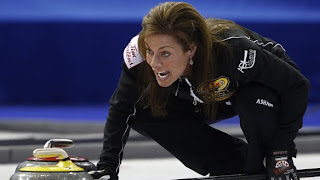 We are big Olympics fans here at Barnyard Organics and even more so this year with Mark's first cousin, Cheryl Bernard, skipping the women's curling team. It makes the games a whole lot more interesting, especially when she broke a tie to win in the 10th end tonight! Whoohoo! We all signed a flag to send out and it was so exciting to see it hanging in the stands, right behind the hack! PEI loves Team Bernard!
Also, finally my oldest ewe broke the seal on the lambing and gave us a big one while I was doing chores. The cutest little thing you ever saw, with its little North Country black nose and characteristic head shape and floppy ears. Thankfully she only had one, since she only milks on one side, but she's a fantastic mother and interestingly enough, was the first one to lamb last year too. Then, when I went over to check her later, another older ewe had a beautiful set of twins. Mark and I got the whole family into a jug and as I left both lambs were nursing happily, tails shaking, mother eating some hay. Let's hope and pretend these births will be an indicator of what's to come! Pictures to follow sometime soon.

Finally, it was bread day here which means two great things;
-the house will smell amazing and somehow I am suddenly both homesick and yet unwilling to be anywhere but here all at once.
-we will go to bed with bellies warm, full and heavy from the divine pleasure of warm bread on a winter day (knowing we will both be up in the night or very early-for sheep and for snow blowing respectively).

Hope this finds you feeling patriotic and in the olympic spirit!