Not sure what to call it, since Lent is not about 'giving something up' as much as it's about recognizing when something has a control over us and we want to hand that control back to where it belongs (the Big Guy upstairs)...so it's a bit strange to call it a resolution, but over time that is basically what it has become. Except that, because Lent is only 40 days, it can be a more difficult resolution, since there's an end to the tunnel. I usually miss the first day and then use that as a good excuse to just pretend I have nothing I need to 'give up'. This year though, my mom reminded me and I've been thinking long and hard about it. I'm still reading Animal, Vegetable, Miracle by Barbara Kingsolver and it's still striking chords with me with each page and it has inspired my lenten fast. 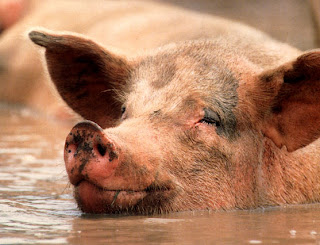 This year I'm going to give up any meat that I don't know it's origins and where it came from. We have a huge freezer full of pork, beef and chicken, all of which I know exactly where it came from, and we don't eat out very often, so it might seem like this should be a pretty easy 'fast'. But this puts a serious cramp in the style of my weekly pizza nights, or throwing some store-bought bacon into a pasta dish to add some extra flavour. Then, the odd time that we do actually hit up a restaurant I will almost veritably have to order the vegetarian or fish dish. I know of two eating establishments on PEI who put the farmer's name in the menu along with what they produce and in this tiny province you are almost guaranteed to at least know the name, if not have had a drink at their kitchen table one time. The Merchantman Pub in Charlottetown, and Cafe Maplethrope here in lil' ole Bedeque (sourcing prime organic lamb from Barnyard Organics I might mention...ahem) both serve delicious grub and have both won the Taste of PEI Award for their locavorian efforts.
However, going there is a real treat and since we just went out on Valentine's, I'm doubtful I'll cross the threshold of another restaurant for a while. And that's ok, because when we went out on Valentine's I couldn't bring myself to ask where the chicken came from. I felt like it was rude or forward of me, but in retrospect, I AM the customer and how are they supposed to know that food sources matter to me if I don't ask?
This is an ethical decision, but also a health one. I firmly believe that 'happy' animals (ie. those in proper living conditions, fed quality feed that is right for their digestive system, treated well, etc.) produce a healthier product. E.coli exists in most of us, but becomes a problem when cows are fed a high-grain diet and the acidity in their stomach is more likely to contaminate the carcass. The chicken in the store with that 'grain-fed' label should actually turn us off since chickens are really supposed to forage for bugs and grass and worms, etc. Of course they need some grain, but when you see chickens on pasture, or hens fighting over a worm, it puts a whole new spin on things. Maybe we need to reconsider that just because we've figured out a way to put out a product as quickly and as cheaply as possible, we are likely sacrificing something along the way.
Anyway, we'll see how it goes. I'm going to miss my pepperoni, but maybe I'll find some stellar substitutes and never go back!
To celebrate the first day of lent, I had new lamb dish #3 for 2010. I made tortellini (won ton wrappers) stuffed with curried lamb sausage, spinach and feta. They were ok. A little too strong on the lamb flavour for me, but pretty good. I think the curry, spinach & feta were an odd combo and next time I'll go with one or the other. They were more like dumplings than noodles, but still a nice little treat. Wilson liked playing and slurping them, while Lucy liked 'unwrapping' them to find the 'surprise' inside, so it was a hit with the whole crew.

I keep forgetting to take my camera over to the barn with me, but I promise to post some lamb pictures soon!!

Here's to quality living for everyone, livestock included!