Girls Can Be Farmers? 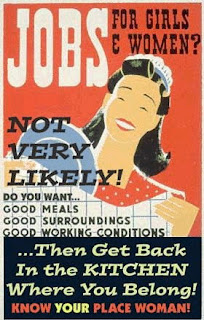 Ugh.  I went to the National Farmers Union annual meeting the other day and there was a booth set up by the PEI Agriculture Sector Council there.  They are responsible for lots of the agricultural publicity and awareness campaigns that happen on the Island.  At their booth they had what looked like a pile of  pens to be given out.  As I walked by however, the executive director handed me one and said, "This is for you. See what it says?"  It was actually a tire pressure checker (better than yet another pen) and it said, "Girls can be farmers too!"
Excuse me?
Is this really a campaign? In 2010? On PEI?  Thank you so much for the condescending permission to do my career of choice.
I wonder how Haley Wickenheiser would feel being handed a hockey puck that says, "Girls can play hockey too!"  Or Chef Michael Smith receiving a spatula that says, "Boys can cook too!"
If this is some kind of awareness campaign for young girls then, a tire pressure checker is not the right medium.  But that's only the tip of the iceburg. I would suggest that many young girls hearing that phrase, would for the first time in their lives wonder, "Hmm..is there a reason I wouldn't be a farmer?"  As in, those barriers don't exist in the minds of young people now.
And if the idea is for the old generation of men (and there's no shortage of old man farmers) who think the woman's place is in the kitchen, it only enforces the idea that women farming is new and that they are amateurs and not to be taken as seriously as any other farmer.
UGH. This has really gotten under my skin.  Its like when we built a rink at our residence back in university and our male don (the adult of the house) came up to my friend and I (the only two girls on the ice) after a game and said soooo condescendingly, "It was so nice to see you two out there today."  Did he say that to any of the boys out there?  Of course not.

There's a reason I have a double minor in Canadian Studies and Women's Studies and sometimes I'm not sure what that reason is.  But when I get handed a tire pressure checker with garbage like that printed on the side, funded with what I can only assume to be my tax dollars, it drives me into a fury.  And yes, for those of you rolling your eyes out there in the world, I realize that the point of this blog is not as a soapbox for my personal vendettas against various institutions, but it happens to work quite nicely for that as well.

Here's hoping you are a board member of the AgSector Council and you realize your mistake before you hand out more poorly made tire pressure checkers to unsuspecting females.

ps. only TWO comments on my mega cute story in pictures?  I'm ticked about that too.  April and Marsha, you're getting a prize of some kind. Thank you for your feedback.   :)
Posted by Sally at 8:59 PM